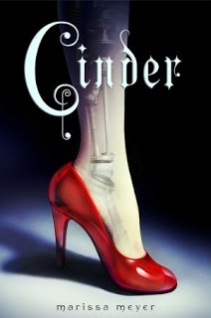 Humans and androids crowd the raucous streets of New Beijing. A deadly plague ravages the population. From space, a ruthless lunar people watch, waiting to make their move. No one knows that Earth’s fate hinges on one girl…
Cinder, a gifted mechanic, is a cyborg. She’s a second-class citizen with a mysterious past, reviled by her stepmother and blamed for her stepsister’s illness. But when her life becomes intertwined with the handsome Prince Kai’s, she suddenly finds herself at the center of an intergalactic struggle, and a forbidden attraction. Caught between duty and freedom, loyalty and betrayal, she must uncover secrets about her past in order to protect her world’s future.

Linh Cinder works as a mechanic in the local open market. A chance encounter brings her in contact with the prince. Prince Kaito, the crown prince of the Eastern Commonwealth, wants Cinder to fix his tutor android that is malfunctioning. Cinder needs upgraded cyborg parts but knows that her stepmother Adri will never allow her to use funds for such frivolities. Prince Kai is dealing with his own set of issues. His commonwealth is one of the most respected on earth and his father is dying of the dreaded plague. Kai must deal with an upcoming festival where he’ll be named the ruler and he must also choose a bride. To make matters worse, the lunar “queen” is pushing for him to marry her and offers a cure for the plague contingent upon that marriage.
Kai is attracted to Cinder and wants to get to know her better. Cinder is attracted to Kai but knows the friendship can’t really go anywhere or can it? As a cyborg, Cinder realizes that she is different from other humans essentially simply because of her cyborg parts. But Cinder doesn’t know where she came from or who her parents were and now that is a mystery that she wants to solve. Dealing with a budding yet secretive friendship with the crown prince is hard, but Cinder must also deal with the fact that her youngest stepsister has contracted the plague and taken to a plague center where she’ll eventually die.
Cinder is dealing with her own set of issues as a result of being a cyborg and adopted, especially once she learns that her stepmother has “donated” her as a test subject for research purposes. Cinder knows that no “cyborg” survives the research that is done and she doesn’t want to be imprisoned, tested or die. It is during this period that Cinder learns the extent of her cyborg nature and also begins to realize that she is more different than she initially believed.
Kai must deal with a possibly hostile takeover by the lunar colony leadership especially since the Queen appears to have the ability to control the thoughts of others. Can Kai overcome the control of the Queen to do what is right for his nation? Will Kai turn his back on a cure even if it means the death of his beloved father? Can Kai and Cinder uncover the true reason behind his android’s sudden breakdown? Will Cinder be allowed to escape the commonwealth and where exactly will she go?
I thoroughly enjoyed reading Cinder. As with many YA books, this is one that can truly be enjoyed by readers of all ages. Although this is set in a dystopian future, it is believable. The characters are fully developed and the action and dialogue realistic. There are plenty of twists and turns in the storyline to keep the reader engaged from the beginning to the end, and I personally can’t wait for volume two to see what will happen next. Thankfully, there’s a prequel being published on January 18, 2012, so if you want to learn more about Cinder and her background check out this preview of the prequel Glitches:  www.tor.com/stories/2011/12/glitches.
Disclaimer: I received an advance reader’s edition of this book free for review purposes from the publisher through ShelfAwareness. I was not paid, required or otherwise obligated to write a positive review. The opinions I have expressed are my own. I am disclosing this in accordance with the Federal Trade Commission’s 16 CFR, Part 255: “Guides Concerning the Use of Endorsements and Testimonials in Advertising.”