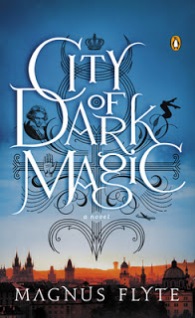 Once a city of enormous wealth and culture, Prague was home to emperors, alchemists, astronomers, and, as it’s whispered, hell portals. When music student Sarah Weston lands a summer job at Prague Castle cataloging Beethoven’s manuscripts, she has no idea how dangerous her life is about to become. Prague is a threshold, Sarah is warned, and it is steeped in blood.

Soon after Sarah arrives, strange things begin to happen. She learns that her mentor, who was working at the castle, may not have committed suicide after all. Could his cryptic notes be warnings? As Sarah parses his clues about Beethoven’s “Immortal Beloved,” she manages to get arrested, to have tantric sex in a public fountain, and to discover a time-warping drug. She also catches the attention of a four-hundred-year-old dwarf, the handsome Prince Max, and a powerful U.S. senator with secrets she will do anything to hide.

Sarah Weston is a doctoral student enamored with all things Beethoven. When she is offered the opportunity of a lifetime to spend the summer in Prague overseeing the Beethoven collection at the newly minted Lobkowicz Palace Museum, she briefly hesitates before accepting. Sarah is a little wary of the scope of her job, but knows she’ll never have another opportunity like this in her lifetime. She is not only in the same room with musical manuscripts written by Beethoven, but she is walking in his footsteps as she wanders around the palace. Sarah also finds it hard to believe that Dr. Sherbatsky, her mentor, could have committed suicide while conducting such prestigious work on the Beethoven manuscripts.
The more Sarah reveals the more confused and wary she becomes. What does Dr. Sherbatsky’s death have to do with Luigi and the Lobkowicz family? Can she trust Nicolas Pertusato, the little person that claims to be four hundred years old? She is attracted to Max Lobkowicz Anderson, the current Prince, but he’s keeping secrets from her so can she trust him? How is current intrigue linked to the mysteries of the past and Beethoven?
City of Dark Magic isn’t about magic per se, but it does weave alchemy, the magic of science and beauty of music along with history into the story. There are obvious dark elements at play in the background but these are the obvious machinations of influential people craving more power. Sarah Weston is the focal point of the story as she has the knowledge of music and the innate ability to “walk through time” to see events from the past. Of course this ability is greatly enhanced by an alchemical drug . . . apparently the same drug that Beethoven had used to help him “hear” better. The authors have carefully crafted a story that incorporates historical tidbits and the wonders of the city of Prague into a modern story. It isn’t possible to separate the past from the present and that seems to be the underlying theme to this story. Sarah wants to gain better understanding of Beethoven and his art and this only possible through careful study of his past. Max wants to protect the past and better understand all facets of his family’s history, good and bad.
It took me awhile to become engrossed in the story, but once I did I found it hard to set this book aside. I rather enjoyed seeing Sarah evolve as an amateur sleuth and the constant surprises wrought by her discoveries. The cast of characters includes an eleven-year-old blind, musical prodigy (Pollina) that sees more than people realize, the four hundred year old dwarf that simply desires an end to his life, the current Lobkowicz Prince on a quest to locate and protect the Golden Fleece, a power hungry Lobkowicz cousin and US senator, and a host of various scholars. The more the authors reveal, the more mysteries there are to uncover. City of Dark Magic provides the reader with murders, international intrigue, historical intrigue, and a bit of romance. Although I did enjoy reading City of Dark Magic and liked all of the characters and settings, I found the sex scenes to be somewhat extraneous and felt they added nothing to the story. I look forward to reading the sequel and can only hope that many of the characters, especially Pollina and Nicolas, make a return.
Read some of the book here: http://magnusflyte.dreamhosters.com/sample-page/first-chapters/
Watch the book trailer:
Disclaimer: I received a copy of this book for free via NetGalley and ShelfAwareness Pro. I was not paid, required or otherwise obligated to write a positive review. The opinions I have expressed are my own. I am disclosing this in accordance with the Federal Trade Commission’s 16 CFR, Part 255: “Guides Concerning the Use of Endorsements and Testimonials in Advertising.”
Buy the book: