Skip to content
There are hundreds, if not thousands of bookish websites on the net, such as BookBrowse, Book Page, Book Reporter, Book Riot, Bookish, FictFact, GoodReads, LibraryThing, Shelfari, Shelf Awareness, and more. Some of these are designed to provide information on bookish news, book trends as well as discuss books. Others are designed to help readers maintain some order with our books, such as books read, books to-be-read, etc. Most of these sites are free but a few are available with a fee-based membership. One of the newer sites that I’ve been using is Libboo.
Libboo helps to promote authors and books and allows individual promoters (like me) the opportunity to offer free ebooks. Usually only one or two copies of any individual title is made available as an ebook, availability is first-come-first serve and limited to one week. This week I’m proud to share with you these offers (click on the title to be taken to the download site – if download is unavailable, then that particular offer has been claimed). All unclaimed offers expire at 11:59 PM ET on March 16, 2013.

First up is A Certain Slant of Light by Laura Whitcomb, only one ebook copy is available.

In the class of the high school English teacher she has been haunting, Helen feels them: for the first time in 130 years, human eyes are looking at her. They belong to a boy, a boy who has not seemed remarkable until now. And Helen–terrified, but intrigued–is drawn to him. The fact that he is in a body and she is not presents this unlikely couple with their first challenge. But as the lovers struggle to find a way to be together, they begin to discover the secrets of their former lives and of the young people they come to possess.


Two copies of Daughters of the Witching Hill by Mary Sharratt:

Daughters of the Witching Hill brings history to life in a vivid and wrenching account of a family sustained by love as they try to survive the hysteria of a witch-hunt.
Bess Southerns, an impoverished widow living in Pendle Forest, is haunted by visions and gains a reputation as a cunning woman. Drawing on the Catholic folk magic of her youth, Bess heals the sick and foretells the future. As she ages, she instructs her granddaughter, Alizon, in her craft, as well as her best friend, who ultimately turns to dark magic.
When a peddler suffers a stroke after exchanging harsh words with Alizon, a local magistrate, eager to make his name as a witch finder, plays neighbors and family members against one another until suspicion and paranoia reach frenzied heights.
Sharratt interweaves well-researched historical details of the 1612 Pendle witch-hunt with a beautifully imagined story of strong women, family, and betrayal. Daughters of the Witching Hill is a powerful novel of intrigue and revelation.
One copy of Deadly Glance by Dallas Taylor (no relation) is available:

Jeff Michael Walker, a successful lawyer in Dallas, Texas, finds the woman of his dreams. But she isn’t what he thinks she is, and her presence in his life spells almost immediate trouble. Her deadly glance pulls Walker deep into a web of deception and a world-wide conspiracy. Our story begins with Jeff, a retired military intelligence officer and recruiter of clandestine spies across the globe. Jeff along with former military officer Bob Wright settle in Dallas, Texas and establish a law firm. While working for a client Bob uncovers a rather ominous connection between Washington and an organization called World One. Foreign interests, lead by a man the US knows as Al Chord, have woven a deep web of influence in national governing bodies. Bob uncovers a secret membership list of the mysterious organization which causes his murder. Jeff continues Bob’s quest leading him to the top of World One and Al Chord, one of the most powerful men in the world. Jeff, haunted by the death of his partner and taunted by the glance of an exquisite woman, he drives on to satiate his need for the truth. This takes him right into the path of Al Chord’s world domination plan. The end unfolds in a surprising and alluring plot. Jeff Walker and Al Chord, compete in a colossal battle between good and evil. May the best man win.
One copy of Don’t Look Back by Karin Fossum:

Don’t Look Back heralds the arrival of an exotic new crime series featuring Inspector Sejer, a smart and enigmatic hero, tough but fair. The setting is a small, idyllic village at the foot of Norway’s Kollen Mountain, where neighbors know neighbors and children play happily in the streets. But when the body of a teenage girl is found by the lake at the mountaintop, the town’s tranquillity is shattered forever. Annie was strong, intelligent, and loved by everyone. What went so terribly wrong? Doggedly, yet subtly, Inspector Sejer uncovers layer upon layer of distrust and lies beneath the town’s seemingly perfect facade. Critically acclaimed across Europe, Karin Fossum’s Inspector Sejer novels are masterfully constructed, psychologically convincing, and compulsively readable, and are now available in the United States for the first time.
Panorama City by Antoine Wilson, one copy is available:

With its blend of fool’s wisdom and deeply felt humanity, Panorama City is heir to Marilynne Robinson’s Gilead and Steve Martin’s The Jerk.
From his deathbed*, 28-year-old Oppen Porter—an open-hearted, bicycle-riding, binocular-toting, self-described “slow absorber”—unspools into a cassette recorder a tale of self-determination, from “village idiot” to “man of the world,” for the benefit of his unborn son.
Written in an astonishingly charming and wise voice, Oppen’s account traces forty days and nights navigating the fast food joints, storefront churches, and home-office psychologists of the San Fernando Valley. Ping-ponging between his watchful and sharp-tongued aunt and an outlaw philosopher with the face “of a newly hatched crocodile,” Oppen finds himself constantly in the sights of people who believe that their way is the only way for him.
Oppen Porter is “an American original” (Stewart O’Nan) for whom finding one’s own way is both a delightful art and a painstaking science. Disarmingly funny and surreptitiously moving, Panorama City makes us see the world, and our place in it, with new eyes.
* Not really

Here is the gut-wrenching, heartrending story of hard-bitten Denver homicide detective Jane Perry and nine-year-old Emily Lawrence. Emily has witnessed the murder of her parents — murders authorities believe have ties to a larger wave of crime. But Emily can’t recall a thing about the killings. When the murderers come after Emily, Jane’s boss sends the two of them to a remote town in Colorado. There, Jane, who doesn’t have a maternal bone in her body, must pose as Emily’s mother and serve as her protector. At the same time, she needs to help Emily slowly remember the devastating event without traumatizing her further.
And while she does so, the killer is closing in . . . .
Protector marks the debut of Jane Perry, an immensely flawed, utterly sympathetic character. She will shock you, confound you, astonish you, and ultimately grip your soul.

One copy of Sweat by Mark Gilleo (read my review here):

When Jake Patrick took a summer internship at his estranged father’s corporation, he anticipated some much-needed extra cash and a couple of free meals from his guilty dad. He would never have guessed that he’d find himself in the center of an international scandal involving a U.S. senator, conspiracy, backroom politics, and murder. Or that his own life would hang in the balance. Or that he’d find help — and much more than that — from a collection of memorable characters operating on all sides of the law. Jake’s summer has turned into the most eventful one of his life. Now he just needs to survive it.
From the sweatshops of Saipan to the most powerful offices in Washington, Sweat rockets through a story of crime and consequences with lightning pacing, a twisting plot, an unforgettable cast of characters, and wry humor. It is another nonstop thriller from one of the most exciting new voices in suspense fiction.
Two copies of The Maid by Kimberly Cutter: 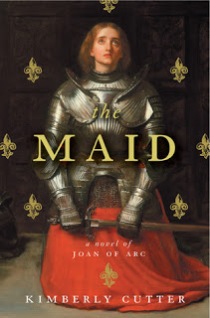 It is the fifteenth century and the tumultuous Hundred Years War rages on. France is under siege, English soldiers tear through the countryside destroying all who cross their path, and Charles VII, the uncrowned king, has neither the strength nor the will to rally his army. And in the quiet of her parents’ garden in Lorraine, a peasant girl sees a spangle of light and hears a powerful voice speak her name. Jehanne.The story of Jehanne d’Arc, the visionary and saint who believed she had been chosen by God, who led an army and saved her country, has captivated our imagination for centuries. But the story of Jeanne – the girl – whose sister was murdered by the English, who sought an escape from a violent father and a forced marriage, who taught herself to ride and fight, and who somehow found the courage and tenacity to convince first one, then two, then thousands to follow her, is at once thrilling, unexpected and heart-breaking. Rich with unspoken love and battlefield valor, The Maid is a novel about the power and uncertainty of faith, and the exhilarating and devastating consequences of fame.