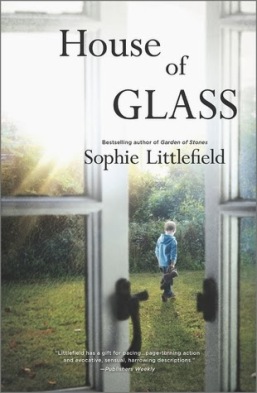 Jen Glass has worked hard to achieve the ideal life: a successful career, a beautiful home in an affluent suburb of Minneapolis, a seemingly perfect family. But inside the Glass house, everything is spinning out of Jen’s control. Her marriage to her husband, Ted, is on the brink of collapse; her fifteen-year-old daughter grows more distant each day; and her five-year-old son barely speaks a word. Jen is on the verge of breaking, but nothing could have prepared her for what is to come…

On an evening that was supposed to be like any other, two men force their way into the Glasses’ home, but what begins as a common robbery takes an even more terrifying turn. Held hostage in the basement for more than forty-eight hours, Jen and Ted must put aside their differences if they have any hope of survival. They will stop at nothing to keep their family safe — even if it means risking their own lives.

A taut and emotional tale of a family brought together by extraordinary forces, House of Glass is a harrowing exploration of both the lengths a mother will go to protect her children, and the power of tragedy to teach us what truly matters.

“Oh, God,” Livvy said, a split second after they heard the lock at the top of the stairs. She was standing apart from her parents, her arms hugging her body. Tears threatened to spill from her eyes. “It smells so bad down here!”

Ted reached for Livvy, and she fell against him. He wrapped his arms around her and hugged her close, and she sobbed against his chest. Jen picked Teddy up and rocked him gently, whispering that he shouldn’t worry about Livvy, that his sister would be just fine.

After a few moments, Livvy’s sobs subsided and she pulled away from Ted. She went to stand near the shelf where all her trophies were lined up — Mini Marlins swim, eight years of soccer, a few for softball, one from the American Legion speech contest back in middle school. Jen could see her shoulders trembling.

“Honey, it’s going to be okay,” Jen said, handing Teddy to her husband approaching Livvy cautiously. She had to keep her calm, had to make her believe she and Ted had things under control. “Once they get what they want, they’ll go.”

“But what do they even want?”

Jen put her hand on Livvy’s shoulder and gently turned her so she could look into her eyes. “Anything they can sell, I would guess. There’s the silver, my jewelry, the computers–any number of things. They’ll take it and they’ll go.”

She could see Livvy trying, wanting to believe her. She tried to make herself believe it, so her face would convince Livvy.

“I need to talk to Daddy,” she said, as calmly as she could. “Can you play with Teddy and keep him busy for a few minutes?”

Livvy nodded. She looked a little better, some of the panic gone from her eyes.

“His old toys are in here,” Jen said, getting a cardboard box down off the shelf. “I haven’t had a chance to get them over to St. Vincent De Paul’s yet. Go ahead and get them out. Whatever he wants.”

Livvy talked softly to her brother, kneeling down on the cold concrete floor next to him and peeling the tape off the box. Jenn and Ted went to the box. Jen and Ted went to the far side of the basement where the old living room furniture was stored, the pieces that Ted kept meaning to put on Craigslist. Ted lifted the old lamp shades off the couch and brushed off the cushions. When they sat down, he took her hands in his.

Sophie Littlefield grew up in rural Missouri, the middle child of a professor and an artist. She has been writing stories since childhood. After taking a hiatus to raise her children, she sold her first book in 2008, and has since authored over a dozen novels in several genres. Sophie’s novels have won Anthony and RT Book Awards and has been shortlisted for Edgar, Barry, Crimespree, Macavity, and Goodreads Choice Awards. In addition women’s fiction, she writes the post-apocalyptic Aftertime series, the Stella Hardesty and Joe Bashir crime series, and thrillers for young adults. She is past president of the San Francisco Romance Writers of America chapter. Sophie makes her home in northern California.
Connect with the author:     Website     |     Facebook     |     Twitter