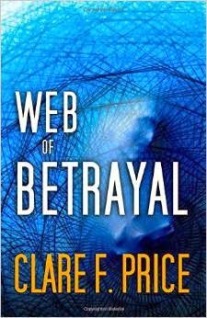 There’s No Hiding in Cyberspace

The year is 1994, the dawn of the Internet Age, when companies from Silicon Valley to London are fighting to claim the billions to be made on the new information highway.

Peter Ellis, an aggressive investigative reporter struggling to repair his damaged reputation after being framed for rigging a story, attends the Consumer Electronics Show and learns that a skilled programmer known for cracking secure computer code has mysteriously disappeared.

Peter’s quest to find the missing programmer unwittingly pits him against a brilliant hacker and deranged killer with an agenda of his own: taking revenge on the man who ruined his life—computer industry luminary David Lockwood—who is now poised to introduce a product that will change the Internet forever.

As Peter is drawn into the deadly game of betrayal and murder, he is faced with losing everything he holds dear: his career, his one true love, even his own life. Can he find the programmer’s encoded disk—which the holds the key to the killer’s identity—before his luck runs out?

It’s 1994 and the race is on to build a set-top box that will stream digital cable, multimedia, and the internet. Two companies are on the brink of delivering the information highway to the masses, but only one will be the first and reap the rewards. Enter Peter Ellis, an investigative journalist focusing on business and technology. Peter hopes that his stories on this quest to be first will help solidify his career in journalism. Little does Peter know that his investigation into these two companies will put his life at risk. The high-stakes world of technology and corporate sabotage are the background for Web of Betrayal by Claire F. Price.
Web of Betrayal is a tech-thriller that is truly a blast from the past. It doesn’t seem real to read about a world without high speed internet, Facebook, Twitter, YouTube, Google, or Amazon. But 1994 is a world with brick-style cell phones, limited online bulletin board systems, and little interest in email for mainstream America. Peter Ellis, an intrepid young journalist, is onto a story that starts out with competing rival tech businesses striving to be first to produce a set-top digital converter box, and quickly becomes a tale of disappearances, murders, corporate sabotage, drug cartels, money laundering, and more.
I wasn’t quite sure what to expect from Web of Betrayal and initially felt that this wasn’t going to be a book I’d like. The first few chapters were a little slow and I wasn’t quite sure where the story was going. However, the pace of the story picked up quite a bit when it began to focus more on Peter Ellis and his investigations than on Toby Eastman, the antagonist in the story. Peter is young, hardworking,  and from a wealthy and privileged background. However, he was also neglected by his parents, abused by his older sister, and cutoff from the family when he went into journalism rather than becoming a lawyer. When we meet Peter, he is still smarting from an article that was rushed to publication with flawed research. The story is retracted and his reputation is in ruins, and his relationship with his girlfriend quickly follows. His search for the truth behind the digital set-top box is his ticket to salvation. Web of Betrayal has a lot of action: corporate sabotage, family betrayal, murder, mayhem, and even rape (male-on-male rape, something that is still not openly discussed). Most of the action in the story takes place over the first few months of 1994, but there are flashbacks to events in preceding years. Once the story pace picked up I was pulled in and couldn’t wait to find out what was going to happen next. I found the characters to be realistic and the action to be quite plausible. Web of Betrayal may not be a fast-paced, action-packed thriller, but it is a well-written, intellectually stimulating thriller that combines technology, intrigue, and even a bit of romance. If you like reading thrillers, then you may want to put Web of Betrayal on your TBR list. I found it to be a perfect read for a lazy fall afternoon and evening. I look forward to reading more from Ms. Price in the future.

Disclaimer: I received a copy of this book free for review purposes from the publisher via Partners In Crime Tours. I was not paid, required or otherwise obligated to write a positive review. The opinions I have expressed are my own. I am disclosing this in accordance with the Federal Trade Commission’s 16 CFR, Part 255: “Guides Concerning the Use of Endorsements and Testimonials in Advertising.”

Enter for a signed copy of Web of Betrayal and a $25 Amazon Gift Card. Giveaway ends November 23, 2014. Winners will be chosen by Partners In Crime Tours.
a Rafflecopter giveaway

One thought on “Book 362: WEB OF BETRAYAL Review”