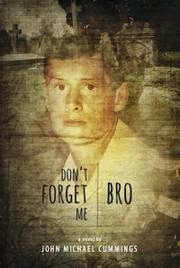 Don’t Forget Me, Bro deals with themes of childhood abuse, mental illness, and alienated families. The book opens with the main character, forty-two-year-old Mark Barr, who has returned home from New York to West Virginia after eleven years for his older brother Steve’s funeral. Steve, having died of a heart attack at forty-five, was mentally ill most of his adult life, though Mark has always questioned what was “mentally ill” and what was the result of their father’s verbal and physical abuse during their childhood. The book unfolds into an odyssey for Mark to discover love for his brother posthumously in a loveless family.

Don’t Forget Me, Bro is a portrait of an oldest brother’s supposed mental illness and unfulfilled life, as well as a redeeming tale of a youngest brother’s alienation from his family and his guilt for abandoning them.

Crossing the field back to my mother’s house, I walked myself deeper into dread of having these photos. To my mother there was one person in the world more pathetic than herself, and she needed Steve, alive or dead, to be that person.

He was her dead baby in her arms. She should have protected him from the man she married, but she didn’t. So she lived with the nails and knots of self-persecution.

Steve smiling, having fun, enjoying himself? Steve getting out of his shoebox apartment and living a little? I did not come here to snap anyone’s twisted thinking. No to showing these photos to my family.

After stashing them in the backseat of my rental, I stepped inside my mother’s house to find a worse surprise: my father sitting in the center of the lemon-yellow sofa, Granddad’s deathbed. It was, I immediately thought, the one inevitable location for him.

When the sofa was moved into our house from Grandma’s, Mom immediately made it off-limits to us, including Dad. Dad never liked Granddaddy Roy. One time they actually had words in front of us. For most of my childhood, the sofa was invisibly roped off. It was also pulled out from the wall like a hideously colored, cotton upholstered sarcophagus. After all these years, my father, who hadn’t lived in this house since I was in high school, when he and Mom separated, was happily sitting on the sofa—no, triumphantly parked on it, one-upping both Mom and his long-dead father-in-law once and for all.

I closed the front door behind me, and my eleven years had never happened. No battered car or truck outside, nothing to warn me he was here.

He raised his head as if expecting me.

He was in front of my eyes before I had a chance to be startled. His voice was no different, still piping out the same sarcasm. In the primrose-yellow light of afternoon coming through the wavy old window panes, his complexion was a strange off-shade of creamed coffee. His short hair was this same muddy-ash.

Two syllables. With my father, every uttered sound was a tripwire.

“You wanna see something?” he asked.

He lifted from his lap and held out an exceptional vase—teal, metallic, finely grooved, as if turned on a lathe.

I stepped past so much in this living room that was still his—a brass powder horn lamp and, on an end table, a miniature Viking ship with a dragon’s head bow and a lashing tail stern, a dozen little oars on either side, which my father had put together from a kit.

When I extended my arm to take this curious-looking vase from him, he pulled it back.

Flowers? That would be my guess.

“You don’t?” His voice rounded down in disappointment.

As soon as he turned a veiny temple toward me, I knew.

A glint in his eyes as he again raised the urn. Warily, I reached for it, eyeing his big-knuckled hand. At the last minute, he tomahawk-chopped the base of the urn down snugly into my palm—not hard, but hard enough.

He held tight to it. But so did I. Then he gave it a sharp pull, sending a snap through my arm and shoulder, and a tug-of-war over the urn was underway. I had no good hold on the wide end of the urn, and he had every advantage grasping the narrow neck. He grinned slightly, the faintest indication of affection. Then, as strangely as it had all started, our arms became relaxed, and the urn felt like a prosthetic handshake between us. He let go, and I stepped back with it.
Just like him to make a little game out of handing it to me.

The urn—not metal, ceramic, or painted glass—and lightweight. If dropped, it would bounce like a plastic water pitcher.

My redneck brother inside this thing? He’d drink beer out of it.

“Now I understand from your mother you gave her some words. Some nonsense about being buried?” He pointed across the living room at the big framed picture of my grandfather.

“Near old Roy the family man?”

Roy the family man, as my father liked to put it, had a halo around him for being everything my father was not—soft-spoken, devoted to his children, a good neighbor.

“It wasn’t nonsense,” I muttered. “Steve told me he did.”

My father leaned forward on the deathbed.

“He told you? Well, whoop–de–do! That damn boy told me a lot of things too. Never carried through with one of them. Told me he was going into the Air Force—but did he?”

“But since he told you, well hell, I guess I should just run out and do whatever he says—is that what you drove all the way down here to say?”

There was but one move here. The nowhere move. Like in chess, when you just stare down at the board, pretending to think, knowing it’s hopeless.

“Laziness. That was Steve’s problem his whole life…quit that good job at Jacobs Concrete. Not a word to anyone, just walked off the site. Damn his foolish little heart.”

I actually understood my father’s ugliness. His sons hated him. Didn’t he realize why we did?

Even as a child I had known that his slapping me and kicking me made him a bad man. Five times my age of five and didn’t know or care? As an old man, he was still a bully.

I rolled Steve’s urn around in my hands.

“Now when you’re finished looking, you can set it down”—he pecked his finger down on the coffee table—”right beside his picture, just where the little devil can look at what he did to himself.”

I was finished. I put the urn beside Steve’s high school graduation picture, which I couldn’t look at, and turned toward the darkened kitchen doorway. I got the feeling my mother wasn’t in the house.

“And for your information, buster, before you run off, the church doesn’t want him buried.”

Caught in a pivot, I glared over my shoulder.

“You heard me. Not in St. Mary’s Cemetery anyway. Your brother—and careful how you look at me—had a reputation.”

“Yeah, well, he was still Catholic.”

“The hell he was—and don’t smart mouth me!” He leaned down with one forearm against his knee and sighted me as if I were a billiard ball at the end of a pool cue. “Another thing, old family sweetheart Roy over there wouldn’t want your damn brother buried near him.”

Clearly the old bastard didn’t want me here. I got that. But what could I do? Erase myself for another decade until someone else died?

John Michael Cummings’ short stories and essays have appeared in more than seventy-five literary journals, including The Iowa Review, North American Review, The Chattahoochee Review, Alaska Quarterly Review, and The Kenyon Review. Twice he has been nominated for The Pushcart Prize. His short story “The Scratchboard Project” received an honorable mention in The Best American Short Stories 2007.
He is the author of the nationally acclaimed coming-of-age novel The Night I Freed John Brown (Philomel Books, Penguin Group, 2009), winner of The Paterson Prize for Books for Young Readers (Grades 7-12) and one of ten books recommended by USA TODAY for Black History month.
He is also the author of the short story collection Ugly To Start With (West Virginia University Press, 2011), which The Philadelphia Inquirer calls a work of “sharp observation and surpassing grace.”

*Please check back in December for links to purchase this book.