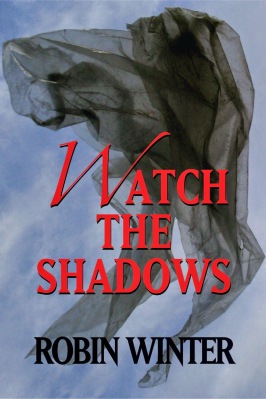 In the college town of Isla Vista, California, small, odd things start happening. Science-geek Nicole notes the crows are leaving.  Meg Burdigal can’t find her tabby cat, Schrand. Brian the postman feels uneasy at the rustlings, the shadows he’s seen at the edge of his vision on his delivery route in town. Now Nicole sees fewer and fewer homeless in the park. Using her knowledge of biology and forensics, Nicole searches for answers—but will anyone take the horror she finds seriously?

“You’re bending the covers,” a voice said. “I could tell on you.”

Nicole jumped, looked up. Did she know this man? He coughed, a hoarse deep cough, and she thought she smelled something rank on his breath. A big guy with slightly stooped shoulders, as though he wanted to look smaller or younger than he was inside his greatcoat. Smooth shaven. She’d seen him before; yes, she had. One of the homeless ladies had been throwing some stones at him as if she were really mad.

Nicole stood up and stepped back, angry, but decided that not answering him was her best choice. She knew how to treat a book, and she’d decided before she sat to read that she was going to buy this one.

“Princess, you’re an arrogant bitch; that’s what’s wrong with you. Had your way paid all your life, I bet. It won’t be like that forever. Things happen—even to the best of us.”

He continued talking after her as she strode toward the cash register.

Mr. Gorham took a moment to realize she was waiting, and Nicole fidgeted, not wanting the big man in the back of the store to follow her. It was growing dark outside, and she knew she was expected at home.

“Oh, Nicole,” he said, and Nicole wished he hadn’t said her name in case the man was listening. “Is this all for you tonight? Better get yourself along home. Your dad still off in DC?”

“No,” she lied. She liked Mr. Gorham, but he had no business tattling her private life in public like that. In the dull glow of the green shaded desk lamp, he looked like a skinny gnome from a children’s book as he counted her change. She assumed he’d never get a cash register. He always figured everything down to the last fraction of tax on a pad of paper with a gnawed pencil stub.

He always joked like that. Nicole thanked him and checked back over her shoulder, but she couldn’t see the big man. Maybe he was looking over the back shelves. Nicole ducked out the door and ran the first three blocks, cutting, after that, across the corner of the park. Slowing down, she felt much better. That was probably the sort of guy her mother would have told her to counter-aggress. Some people needed to be swatted back, or they would keep leaning in on you. But it was hard to tell sometimes, and she hadn’t wanted to engage with him in any way. It was a choice. This part of the street was better lit, and she slowed down even more, patting her book.

But it was gone.

“No; oh shit,” she said out loud and the sound of her own voice surprised her. She looked back down the street. Twilight and past. Mom might not notice if she were late. She thought about leaving the book lost, and the idea hurt. Silly though it seemed, she felt as if the book would miss her, feel deserted. Dropped in some gutter with the stale beer and coke cans, meaning nothing to anyone but her.

She began to retrace her way.

“Shit shit shit shit shit,” she said, and the word soothed her with repetition. She kept imagining she saw the flutter of pages just there, under the bush, or no, over in the shadow of the verge by the Volkswagen with rust spots. She’d spent her own good money on that paperback right down to the tax. She wasn’t going to let it lie abandoned somewhere in the street. She jogged through the park, straining her eyes, then let herself walk again. That’s what you got for being a nerd. If she were a track star, she wouldn’t run out of breath this easy.

Two blocks from the bookstore on Sabado, she saw it, and she swallowed in relief. Right smack in the middle of the pavement. She was so focused on it that, when another shape bent down and another hand reached for it, she almost blurted thank you.

It was the big man from the back of the bookstore. He was holding his coat closed with one hand, awkwardly, and her first thought was —he’s a flasher. I can scream for Mr. Gorham, but he’s probably reading.

“Someone lost her book,” the big man said. He looked like all the bullies she had ever seen coming up through school. He had that expression with the eyes narrowed in anticipation, dandling the book as if to tempt her to snatch it back. He laughed, and she wanted to hit him.

Be smart, Nicole; getting involved with this guy isn’t worth it. You know that, don’t you?

Then two things happened. A sound came from Mr. Gorham’s shop, probably nothing more than a dropped book, but it made the big man jerk, and when he did a magazine fell out of his coat. Without a plan, Nicole leapt forward, swept the book from his fingers, and was off in a start that would have done the track coach credit. She had never run so fast. She heard a shuffle, felt the movement of air as if he grabbed after her, but Nicole knew better than to hesitate. Or look back.

Robin Winter first wrote and illustrated a manuscript on “Chickens and their Diseases” in second grade, continuing to both write and draw, ever since. Born in Nebraska, she’s lived in a variety of places: Nigeria, New Hampshire, upper New York state and now, California. She pursues a career in oil painting under the name of Robin Gowen, specializing in landscape. Her work can be viewed at Sullivan Goss Gallery in Santa Barbara or on-line at www.sullivangoss.com/Exhibits/RobinGowen2012.asp.
Robin is married to a paleobotanist, who corrects the science in both her paintings and her stories. She’s published science fiction short stories, a dystopian science fiction novel, Future Past, and Night Must Wait, a historical novel about the Nigerian Civil War.


This book tour, excerpt, and giveaway brought to you by:

2 thoughts on “WATCH THE SHADOWS Excerpt and Giveaway”

Have you registered for #BlackReadersCon yet?!
The “Charly Wonder” bus by Charly Jupiter Hamilton has made it’s way to Charleston. One of the sweetest passengers—💙KJ Taylor💙. His parents, Kelvin and Tara, were present for the unveiling. #CharlestonWV
Read an #excerpt from #TheEncanto, book one in the #LAFog series by @ArthurSwanAuth in today's book showcase: https://thebookdivasreads.com/2021/10/18/book-showcase-the-encanto-by-arthur-swan/. #fiction #mystery #supernaturalthriller #VBT #booktour @prbythebook
Today's book spotlight shines on THE INNS OF DEVONSHIRE by @authorsallybritton, @annette.lyon, and @authordeborahmhathaway. Visit https://thebookdivasreads.com to learn more. @RomanceTimeless #InnsOfDevonshire #TimelessRegencyCollection #HistoricalRomance #RegencyRomance #NewBook #BookTour
#Amreading a digital copy of WE ARE NOT LIKE THEM by @cpride and @jopiazzaauthor published by @atriabooks. This title is the October group read for my online book club, @mochagirlsread. #digitalbookdiva #bookclubread
Head over to https://thebookdivasreads.com to read a Q&A with @cindybrandt, author of YOU ARE REVOLUTIONARY, illustrated by @lbontigao, published by @beamingbooksmn. Psst, there's a print book #giveaway on the blog Follow the #vbt to read reviews and learn more about this book. @prbythebook #YouAreRevolutionary #childrensbook #advocacy #kidactivist #jointherevolution #bookgiveaway