Skip to content
The Book Diva’s Reads is pleased to host another visit from author Maris Soule. Ms. Soule is the author of a host of books and today she’ll be discussing crafting the story Eat Crow and Die. 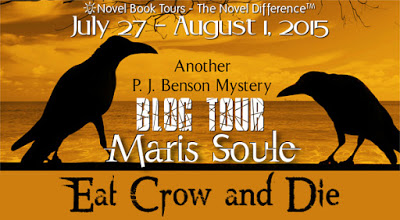 Thank you, Vivian, for once again inviting me to your blog. Eat Crow and Die is the other book I have out this summer. It’s the third book in the P.J. Benson Mystery series.
It took me a long time to write Eat Crow and Die. I knew how I wanted the story to start—Sheriff’s Deputy Wade Kingsley’s boat would blow up on Lake Michigan not far from the South Haven lighthouse, with Wade, Wade’s six-year-old son Jason, Wade’s ex-wife, and her new husband aboard. I also knew I wanted P.J. Benson back at the farm house she inherited from her grandfather, wondering if she might be pregnant and worrying that if she was whether she’d become a schizophrenic, as her mother did while pregnant for P.J..
Okay, fine. But what happens next? Why does Wade become the prime suspect? Is P.J. pregnant? Who did put a bomb on Wade’s boat? When? Why? And how does P.J. end up figuring it out?
One thing I love about writing is the research. I have a friend who recently retired from the  Coast Guard Auxillary. I bought his breakfast, and he took me step by step through the rescue procedure. I attended the Writers’ Police Academy and viewed a session on underwater procedures by crime scene investigators. I called the local sheriff’s department for information, read about boat explosions, and played with a variety of ideas on how to make a bomb that would be believable. I also had to learn about algorithms. (You’ll have to read the book to find out why.)
In addition to my research, I needed to come up with several others who might be suspects. Each needed a motive to want to harm Wade or someone on the boat. And I needed to make things happen in just a few days.
I’m often asked how long it takes to write a book. I guess the answer is as long as it takes to find answers to all of your questions and then put it all together so it makes (or seems to make) sense. I hope I succeeded with Eat Crow and Die.

Award-winning author of 25 romances, 2 mystery and 2 short stories, with 2 suspense novels coming out 2015. Maris Soule was born and raised in California but moved to the midwest two years after her marriage. She is a member of MWA, MMRWA, Sisters-in-Crime, RWA, FWA, and Authors’ Guild. Soule is still married to the same man, has two grown children, and two granddaughters. She is currently working on another mystery, this one set in Skagway, Alaska.

P.J. Benson knows Sheriff’s Detective Wade Kingsley wouldn’t blow up his own boat to kill his ex-wife and her new husband, Michael Brewster. Sure, Wade wasn’t happy that his ex was taking their six-year-old son, Jason, to live in California, but Wade and Jason were also onboard the boat when it blew up. Wade would never have endangered his son that way.

Nevertheless, the investigating detectives consider Wade their prime suspect,and Wade’s ex in-laws loudly accuse him and threaten to file for custody of Jason. Under the circumstances, P.J. is certain this isn’t the right time to tell Wade she’s pregnant, but bouts of morning sickness give her away. Wade is upset by the news. P.J. wonders if it’s because he’s afraid he’ll be put in prison for a double homicide he didn’t commit, or if he’s afraid the new baby will cause P.J. to become schizophrenic, as was the case with her mother. Even P.J. is worried about that. Although Wade doesn’t want her playing detective, P.J. soon discovers that Michael Brewster wasn’t as great a guy as everyone thought. But did anyone hate the man enough to kill him?