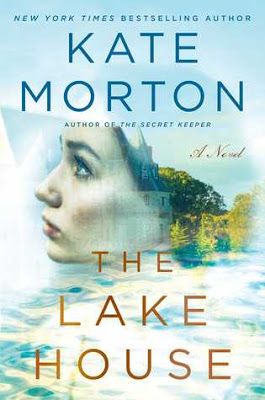 From the New York Times and internationally bestselling author of The Secret Keeper and The Distant Hours, an intricately plotted, spellbinding new novel of heartstopping suspense and uncovered secrets.

Living on her family’s idyllic lakeside estate in Cornwall, England, Alice Edevane is a bright, inquisitive, innocent, and precociously talented sixteen-year-old who loves to write stories. But the mysteries she pens are no match for the one her family is about to endure…

One midsummer’s eve, after a beautiful party drawing hundreds of guests to the estate has ended, the Edevanes discover that their youngest child, eleven-month-old Theo, has vanished without a trace. What follows is a tragedy that tears the family apart in ways they never imagined.

Decades later, Alice is living in London, having enjoyed a long successful career as an author. Theo’s case has never been solved, though Alice still harbors a suspicion as to the culprit. Miles away, Sadie Sparrow, a young detective in the London police force, is staying at her grandfather’s house in Cornwall. While out walking one day, she stumbles upon the old estate—now crumbling and covered with vines, clearly abandoned long ago. Her curiosity is sparked, setting off a series of events that will bring her and Alice together and reveal shocking truths about a past long gone…yet more present than ever.

A lush, atmospheric tale of intertwined destinies, this latest novel from a masterful storyteller is an enthralling, thoroughly satisfying read.

In the summer of 1933, Alice Edevane is 16-years-old with two sisters and an infant brother. The Edevanes live in Loeanneth, the lake house, in Cornwall. Alice is a burgeoning writer with a crush on a visiting gardener. The morning after the family’s big Midsummer party, the youngest Edevane, Theo, is missing. A search ensues, but the mystery of Theo’s disappearance is never solved. Fast forward to 2003 and disgraced police detective Sadie Sparrow visits her grandfather in Cornwall. When Sadie learns about the mystery surrounding Theo Edevane’s disappearance, she launches her own investigation in The Lake House by Kate Morton.
The Edevane household consists of father – Anthony, the mother – Eleanor, eldest daughter – Deborah, middle daughter – Alice, youngest daughter – Clementine or Clemmie, infant son – Theo, Eleanor’s mother – Grandmother de Shiel, the elderly Daffyd Llewellyn – an author and former physician, and a host of servants. Mr. Llewellyn was a friend of Eleanor’s father and wrote a book featuring a young Eleanor. We learn that Eleanor had a tumultuous relationship with her mother after her father’s death, falls in love at first sight with Anthony Edevane, and marries him. Anthony’s family is wealthy, but as the third son it is presumed he’ll have to work for his living. Tragically, his parents and older brothers die on the Titanic and he and Eleanor become wealthy overnight. Although Anthony studied to become a surgeon, World War I leaves him suffering from severe shell shock and unable to control tremors in his hands. The family quite happily resides at Loeanneth until Theo disappears. Loeanneth is closed and the family moves to London. The Edevane family is destroyed by the secrets kept as much as their grief over Theo’s disappearance.
In 2003, Sadie Sparrow is advised to take time off from the London police department after she commits the unpardonable sin of talking to the press about a case. She decides to visit her grandfather, Bertie, in Cornwall. Sadie’s professional career hangs in the balance as she awaits a decision from administration. Her personal life is also on tenterhooks as she’s been contacted by the child she gave up for adoption 14 years earlier. In an effort to ignore both situations, she decides to investigate the 70-year-old cold case relating to Theo’s disappearance. Sadie contacts A.C. Edevane, a renowned mystery author, seeking questions about the Edevane family and Theo’s case, but is rebuffed. Is it possible she can discover the truth after all these years? Should the secrets of the past be kept in the past?
If you couldn’t tell by now, I loved The Lake House. This isn’t a fast or quick read, but it is a story to be savored and well worth the time invested. I enjoyed Ms. Morton’s ability to weave the stories of Constance and Anthony from the early 1900s, the Edevane family in the 1930s and 1940s, and the contemporary action taking place in 2003. Yes, there’s a lot of information provided, but this is essentially a story within a story within a story, namely those of Eleanor de Shiel Edevane, Alice Edevane, and Sadie Sparrow. These stories are all linked and it is necessary to know them all in order to understand what happened, what is happening, and why. There are plenty of twists and turns to keep the reader guessing who did what and why. As soon as it appears an answer is found, the story takes a major turn and a new theory is presented. The Lake House is a hauntingly beautiful story about secrets, promises kept, second chances, love, family, and more wrapped in a 70-year-old mystery. If you’re looking for the perfect fall read (okay the perfect read for any season), then I strongly suggest you read The Lake House. Something tells me this is going to be one book I pick up to reread every now and again.
Disclaimer: I received a digital copy of this book for review purposes from the publisher via NetGalley. I was not paid, required, or otherwise obligated to write a positive review. The opinions I have expressed are my own. I am disclosing this in accordance with the Federal Trade Commission’s 16 CFR, Part 255: “Guides Concerning the Use of Endorsements and Testimonials in Advertising.”