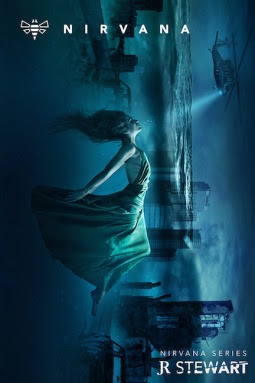 When the real world is emptied of all that you love, how can you keep yourself from dependence on the virtual?

Animal activist and punk rock star Larissa Kenders lives in a dystopian world where the real and the virtual intermingle. After the disappearance of her soulmate, Andrew, Kenders finds solace by escaping to Nirvana, a virtual world controlled by Hexagon. In Nirvana, anyone’s deepest desires may be realized – even visits with Andrew.

Although Kenders knows that this version of Andrew is virtual, when he asks for her assistance revealing Hexagon’s dark secret, she cannot help but comply. Soon after, Kenders and her closest allies find themselves in a battle with Hexagon, the very institution they have been taught to trust. After uncovering much more than she expected, Kenders’ biggest challenge is determining what is real – and what is virtual.

Nirvana is a fast-paced, page-turning young adult novel combining elements of science fiction, mystery, and romance. Part of a trilogy, this book introduces readers to a young woman who refuses to give up on the man she loves, even if it means taking on an entire government to do so.

Imagine a not-too-distant future where the bees are gone, followed by plants, trees, and slowly disappearing water sources. Imagine that one mega-corporation is providing food, shelter, and employment in this dry dystopian land. This corporation monitors everything that is said and done and as long as you don’t upset things, they’ll continue to provide for you. Your only escape is into a world of virtual reality also controlled by this mega-corporation, but even this escape world is monitored. If you can imagine such a scenario, then you have entered the world of Nirvana by J.R. Stewart.
Larissa Kenders referred to as simply Kenders, is a young woman that remembers the rapid fall from normal into a world of constant monitoring and fear. The love of her life, Andrew, works with Hexagon to control the virtual reality world of Nirvana. Just when Andrew and Kenders think that things can’t get any worse, Hexagon institutes a new level to Nirvana called the Red Door. If visitors to Nirvana get flagged for the Red Door they vanish and are never seen again. Andrew, with the help of Kenders, is working to erase these flags from the system and protect as many people as possible. His bosses aren’t aware of his activities, but they know that something isn’t quite right with his work. And then Andrew disappears and is presumed to be dead. Kenders has a difficult time accepting his disappearance or the notion that Andrew is dead and begins to use virtual reality to help lessen the grief. However, she isn’t “remembering” past encounters with Andrew in Nirvana, she is receiving messages from him. How can this be? What was Andrew working on and what made it so dangerous? Why is Hexagon so interested in monitoring Kenders’ visits to Nirvana? Is Andrew still alive and if so, where is he?
Nirvana is a quick and engrossing read that is definitely part science fiction, part mystery, part thriller, and a little bit of romance all set in a dystopian future. Kenders is a teenage musical prodigy that has had to grow up very quickly. It is never revealed how old Andrew is, but we now that he is older than Kenders (it is because of Kenders age that Nirvana might be classified as YA or NA). Kenders and Andrew met at one of her punk rock concerts in the pre-dystopian world. They were both activists and became friends and then lovers. In Kenders world, the wealthy live in climate-controlled bubbles with plentiful resources and the survivors live out in cramped living quarters and are forced to work in the dry, dusty world that remains. Ms. Stewart sets up the fall of the world into chaos in a highly believable (okay, scarily believable) manner. The science fiction parts of the story are credible and the mystery-thriller portions added to my overall enjoyment of this story. Nirvana is the first book in a new series by Ms. Stewart, and I can’t wait to read the next book in this series and find out what happens next.