Good morning my bookish peeps. Today, the Book Diva’s Reads is pleased to host a visit from Peter M. Parr, author of Escape to Redemption. Mr. Parr will be discussing his writing and editing process.

Writing is a mixture of inspiration and perspiration. Occasionally I’ll sit at the computer – or more often with a pen and notepad in my armchair – and the words will simply flow. Or I may be lying in bed at night and, unbidden, a sentence or a phrase will come to me… and (somewhat grudgingly!) I switch on the light to jot it down. More often, the going is a lot harder. It may take me a month to grind out a chapter… I’m talking here about a first draft. At this early stage, I have to remind myself that it’s important to get something – anything – down on paper. What daunts me is a blank page. Once I have the spine of a scene, it’s relatively easy to expand on and enhance.
Every chapter of Escape to Redemption went through at least six drafts – and in some cases, many more than that. After I’d written a first draft of a scene, perhaps little more than an outline, I’d print it out and set to work on it with my red pen. It’s an eighty-minute train journey from where I live, on the south coast of England, to London… a perfect opportunity to do some editing. Each time I travelled to London for work, or to meet friends, I’d develop or improve a scene: putting meat on the bones of dialogue, honing descriptions, reading and re-reading to see how it flowed. Then, at home, I’d type up my changes and print off a clean version of the document to work on again. After three or four drafts I’d reach the point where I began to cut more than I added… pruning superfluous dialogue or descriptions until the pace felt right.
The novels I most enjoy tend to have compelling and rounded protagonists. I prefer a flawed hero or heroine; someone neither too perfect nor all bad. Even the minor characters should have depth to them. I spend a lot of time getting to know my own characters; gaining a sense of what makes them tick, their likes and dislikes, hopes and fears. When I write a scene from a character’s perspective, in my mind I become them. I’m aware of their history, and their motivation – even beyond what’s recorded in the novel. I attempt to think as they’d think and speak with their voice. One of the key things I look out for when I’m editing is whether I’ve portrayed the characters in an authentic way. Do the characters drive what happens next, as opposed to saying or doing something simply to conform to the plot? I’m not afraid to change the direction a chapter takes if the way I’ve initially planned it doesn’t feel true to how the characters would behave.
Before submitting a book to a publisher, I put it aside for several months. The time gap means that, when I return to do a final edit, I can look at the text with fresh eyes. The homestretch of the editing process is what I call polishing. I’ve read a number of books, especially self-published ones, which had the potential to be good, but which in my view were let down by a lack of keen editing. It’s amazing what a difference small changes make; how much tighter and more professional a book can be made to feel. For example, I search for words or phrases which I may have overused. I have a checklist of suspects which I cut or replace unless there’s no alternative – words such as ‘seem’ or ‘just’ or anything ending in ‘‒ly’. In dialogue, I tend to stick with ‘he said’ and ‘she said’, rather than use alternatives like ‘interrupted’, ‘suggested’ or ‘screamed’. ‘Said’ is almost invisible on the page, whereas the other words stand out more and may slow the dialogue down. If it isn’t apparent from the context that a character has interrupted or screamed, I take it as a sign that I need to get my red pen out and refine that section of dialogue again.
Some writers can pen a great novel in six months. I’m not one of them. Trying to force out a book within a set amount of time would, to me, mean compromising on quality and depth. Everything in nature has its own rhythm and I believe the creative writing process does too. It’s important that we enjoy that process and engage in it wholeheartedly. If we can do that, I think we’re more likely to create a story that’s authentic – one that was uniquely ours to tell. 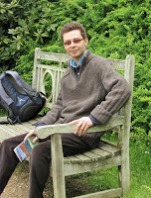 Peter M. Parr works part-time as a civil servant, which gives him time to indulge his passion for writing. He facilitates workshops to encourage people to reflect on what truly matters. He lives in Hastings, England, overlooking the sea. Escape to Redemption is his first novel.

Josie only had the gun to frighten Curtis Rook, but his son disturbed her. One startled reflex and now he’s dead. Josie flees to Poland leaving her boyfriend Snaz to take the rap. A reformed criminal offers her refuge from the police and the chance to begin a new life, but she cannot hide from her guilt. As the stakes rise, Josie begins to realise that only her own forgiveness can set her free.

Fast-paced and original, Peter M. Parr’s contemporary take on Crime and Punishment challenges traditional ideas about guilt and redemption, and the meaning of forgiveness.

Snaz caught up with Josie at the top of the staircase.

‘Sorry for my mum’s comment about reading the meters. She’s a bit of a racist, I’m afraid,’ Josie said.

‘My mum and I share a mutual antipathy. When I go up to Oxford next month I’ll be out of her hair and she won’t need to worry. You look shocked, Snaz. I bet you’re really sweet to your mother.’

Josie looked like she might say something, but didn’t. After a pause she went into her bedroom. ‘Make yourself at home,’ she told him, closing the door and then perching on the chair by her dressing table. He marvelled at the clutter of perfumes and make-up bottles.

Snaz saw no chair to sit on, only her single bed. He meandered to the window and looked out onto the back garden. ‘You’ve got a tennis court!’

Snaz kicked himself for missing out on a chance to see her in a skimpy tennis outfit. ‘I play football,’ he said, the first thing that came to him. When she showed no interest, he changed the subject. ‘Is that photo of your dad?’

‘You get on better with him than with your mum?’

‘He’s alright, when he’s actually here. He’s always off on business trips. The States, usually. I think he’s in Poland this time.’

‘He runs his own business putting buyers in touch with sellers. Sometimes it’s property. Sometimes it’s art. I don’t think he cares too much if there’s money in it. One day he might stop and enjoy what he has.’

Snaz groped for something else to say. He noticed a higgledy-piggledy stack of CDs on the chest of drawers and was about to ask her what music she liked.

‘I wanted to thank you again for what you did,’ she said.

‘That’s okay. Anyone would have done the same.’

‘Not anyone would have seen that man spike my drink. I’m lucky you were watching me so closely. I saw you.’ She smiled.

Snaz felt himself blush. ‘You’ve got to be careful in clubs. Some blokes try anything.’

‘It’s my friend’s fault for dragging me there, then leaving with the first man she set eyes on.’

‘Did you get home okay?’ Snaz asked.

‘I mean, you felt alright, did you? You weren’t shaken up?’

A lock of her hair fell across her face and she brushed it to one side. You couldn’t call her a redhead, but her hair was redder than blonde. There must be a word for hair that colour, Snaz thought.

‘Is it true what you told him, about being a boxer?’

Snaz smiled. ‘I’ve boxed as many times as I’ve played tennis. He didn’t know that though. But I can handle myself. I could’ve dealt with him.’

‘Why don’t you sit down? I want to ask you something. It’s kind of a favour.’

He sat on the edge of her bed.

Josie picked up a birthday card from her dressing table and held it out to him. She had tiny dainty hands. ‘What do you make of this?’

He pulled his eyes away from her to the picture of a kitten, all fluffy fur and ribbons. Sickeningly cute.

Happy birthday. From Erin, a friend. Call me if you want to know the truth. And underneath, the sender had written a phone number. ‘Who’s Erin?’ he asked.

‘That’s the thing. I haven’t a clue. I rang her, and she wants to meet me. She says there’s something I ought to know, but she can’t tell me over the phone. Her accent is ghastly, like she finds it too much of an effort to pronounce her t’s.’

‘It sounds dodgy. What’ll you do?’

‘Dodgy,’ Josie repeated, and Snaz wondered if she considered his way of speaking ghastly as well. ‘That’s what I thought. Will you come with me, to go to meet her? I’m going on Saturday.’

‘Sure. I mean, if you want me to.’ It sounded odd; not exactly a date, but at least he’d see her again.

Enter to win a copy of Escape to Redemption by Peter M. Parr (winner’s choice of PDF, EPUB, or Print). This giveaway open to residents of the US, Canada, and UK. The giveaway ends on Friday, August 26th and winner will be announced on Saturday August 27th. Use the Rafflecopter form below to enter:


This guest post, excerpt, and giveaway brought to you by: One thought on “Guest Post: Peter M. Parr, author of ESCAPE TO REDEMPTION”