You’ll have your deposit within seven business days, just like it says on Getaway.com. I’ve put through a refund to your credit card for the full amount, minus $200 to replace the stained sheets…
Miranda

When 30-year-old Dawn reads Miranda’s email, she sees red. People have always told Dawn she’s beautiful, and she just hopes they don’t see beneath—to how she grew up, to what she’s always tried to outrun. She revels in her getaways with her perfect (maybe too perfect) husband, the occasional long weekend in luxurious homes, temporarily inhabiting other people’s privileged lives. Miranda’s email strikes a nerve, with its lying intimation that Dawn is so dirty you need to throw out her sheets.

Beware of your “host”

I wouldn’t have left a review at all, if I didn’t feel it was my civic duty to warn others…

57-year-old Miranda thought she’d seen it all, but she can’t believe her eyes when she reads Dawn’s review. She’s a doctor’s wife but she needs that rental money, desperately. People might think her life is privileged, but they don’t know what’s really going on. They don’t know about her son. She won’t take this threat to her livelihood—to her very life—lying down.

Two very different women with this in common: Each harbors her own secret, her own reason why she can’t just let this go. Neither can yield, not before they’ve dredged up all that’s hidden, even if it has the power to shatter all they’ve built.

This is not over.

This is so not over.

It all starts with an email message about a refund and goes downhill from there. Dawn and Rob Thiebold enjoy spending weekends away from their Oakland apartment and routinely use VRBO homes. Dawn is in charge of finding the homes they stay in and she takes her research into these homes quite seriously. The beach rental should have made for a perfect weekend getaway, but it is anything but perfect and then she receives an email stating they left a mysterious “stain” on the sheets and wouldn’t be receiving a full refund. Dawn tries hard to channel Rob’s more laidback attitude and let this go, but she refuses to accept Miranda’s version of accounts and fights back the only way she can. Dawn’s text message and email responses to Miranda quickly turns into an internet campaign to right a wrong. If dealing with Miranda isn’t enough, Rob wants to start a family, and Dawn’s father dies and she finds out her parents were never legally married. Everything seems to be crashing down around her and she finds refuge with an unlikely ally.
Miranda isn’t sure how a simple text message could have evolved into a campaign to besmirch her character as a VRBO host. She tries her best to remain civil with Dawn and work out a reasonable arrangement. She even offers to refund Dawn if she’ll only take down the somewhat negative review posted on the VRBO host website. Miranda is also dealing with an aging parent suffering from dementia, a distant husband that never seems to agree with her opinion about anything, and a drug-addicted son that seeks to keep her off balance while constantly seeking financial assistance. The only thing Miranda can focus on is maintaining a little bit of sanity in her increasingly insane existence, her status as a good VRBO host. When that is taken away from by Dawn’s reporting the short-stay vacation rentals to the authorities, Miranda decides to take a stand. She stands up to her mother and is kicked out her mother’s assisted living facility. She stands up to her husband and he takes off for a medical conference. But what can she do to stand up to a renter that lives hours away?
I found This Is Not Over to be a rather fast-paced read. It is a psychological thriller that kept me guessing until the very end. It is easy to see how a seemingly innocent text message or email could be taken out of context when it isn’t possible to hear the sender’s voice or see their nonverbal cues. The reader sees and hears what they want to see and hear. Dawn sees one thing and mounts what might be seen as cyberstalking and cyberbullying behavior. Miranda is all too focused on her reputation to see that she’s living a lie. She wants to be perceived as the perfect host when her marriage and family life are crumbling down around her. Both Dawn and Miranda make assumptions about one another and their actions are based on those preconceived notions. This Is Not Over is not a she said/she said story, it is about misconceptions and an unwillingness to see the other side of the equation. This story contains lots of family angst and drama, cyberstalking, cyberbullying, hopelessness, despair, and an inability to see circumstances clearly while enraged. I could tell you where the psychological thriller component comes into play, but then you wouldn’t need to read the story. The story was slow moving at first, but then it picked up and kept my attention to the very last page (I had to know what happened next). If you enjoy reading psychological thrillers filled with family drama, then you’ll definitely want to read This Is Not Over.

Disclaimer:  I was not paid, required, or otherwise obligated to write a positive review. The opinions I have expressed are my own. I am disclosing this in accordance with the Federal Trade Commission’s 16 CFR, Part 255: “Guides Concerning the Use of Endorsements and Testimonials in Advertising.”

Holly Brown lives with her husband and toddler daughter in the San Francisco Bay Area, where she’s a practicing marriage and family therapist. She is the author of the novel Don’t Try to Find Me, and her blog, “Bonding Time,” is featured on the mental health website PsychCentral.com.

This tour brought to you by TLC Book Tours: 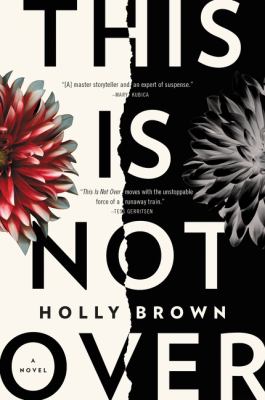