The endgame is at hand for Penn Cage, his family, and the enemies bent on destroying them in this revelatory volume in the epic trilogy set in modern-day Natchez, Mississippi—Greg Iles’s epic tale of love and honor, hatred and revenge that explores how the sins of the past continue to haunt the present.

Shattered by grief and dreaming of vengeance, Penn Cage sees his family and his world collapsing around him. The woman he loves is gone, his principles have been irrevocably compromised, and his father, once a paragon of the community that Penn leads as mayor, is about to be tried for the murder of a former lover. Most terrifying of all, Dr. Cage seems bent on self-destruction. Despite Penn’s experience as a prosecutor in major murder trials, his father has frozen him out of the trial preparations—preferring to risk dying in prison to revealing the truth of the crime to his son.

During forty years practicing medicine, Tom Cage made himself the most respected and beloved physician in Natchez, Mississippi. But this revered Southern figure has secrets known only to himself and a handful of others. Among them, Tom has a second son, the product of an 1960s affair with his devoted African American nurse, Viola Turner. It is Viola who has been murdered, and her bitter son—Penn’s half-brother—who sets in motion the murder case against his father. The resulting investigation exhumes dangerous ghosts from Mississippi’s violent past. In some way that Penn cannot fathom, Viola Turner was a nexus point between his father and the Double Eagles, a savage splinter cell of the KKK. More troubling still, the long-buried secrets shared by Dr. Cage and the former Klansmen may hold the key to the most devastating assassinations of the 1960s. The surviving Double Eagles will stop at nothing to keep their past crimes buried, and with the help of some of the most influential men in the state, they seek to ensure that Dr. Cage either takes the fall for them, or takes his secrets to an early grave.

Tom Cage’s murder trial sets a terrible clock in motion, and unless Penn can pierce the veil of the past and exonerate his father, his family will be destroyed. Unable to trust anyone around him—not even his own mother—Penn joins forces with Serenity Butler, a famous young black author who has come to Natchez to write about his father’s case. Together, Penn and Serenity—a former soldier—battle to crack the Double Eagles and discover the secret history of the Cage family and the South itself, a desperate move that risks the only thing they have left to gamble: their lives.

Mississippi Blood is the enthralling conclusion to a breathtaking trilogy seven years in the making—one that has kept readers on the edge of their seats. With piercing insight, narrative prowess, and a masterful ability to blend history and imagination, New York Times bestselling author Greg Iles illuminates the brutal history of the American South in a highly atmospheric and suspenseful novel that delivers the shocking resolution his fans have eagerly awaited.

Penn Cage is a lawyer turned best-selling fiction author. After the death of his wife, Penn relocated to his hometown of Natchez, Mississippi with his young, grieving daughter. Over the past few years, he’s been instrumental in solving the decades-old murder of a Black Civil Rights leader, helped a childhood friend accused of murder, and more. Penn, his family, and indeed most of the people in Mississippi know that the past is never far removed from the present and it is the past that has come back to haunt the lives of the Cage family, specifically Penn’s father, Dr. Tom Cage. Tom Cage is being accused of murdering his former nurse and lover in an effort to silence her from revealing his illegitimate bi-racial child with her. Meanwhile, Penn and his daughter Annie, are still reeling from the murder of Penn’s fiance, Caitlin Masters. If that’s not enough to contend with, Penn is also in the fight of his life to protect his family from the last surviving Double Eagles in their quest to silence witnesses to their past and present misdeeds. Add into the mixture, a renowned nonfiction author and mentor to a young reporter that’s been seriously injured in retaliation for her news stories, an aging but well-known Black lawyer representing Dr. Tom Cage, a Black presiding judge that was mentored by the defending attorney, a Black district attorney that wants to make a name for himself no matter the cost, a White sheriff that has a long-standing beef with Dr. Cage because of past behaviors by the sheriff, and an angry biracial man out for revenge against his recently revealed father.
To say that there’s a lot going on in Mississippi Blood is a massive understatement, but Mr. Iles takes all of these seemingly disparate topics and weaves them into a taut and cohesive story. If you’ve read Natchez Burning and The Bone Tree, you’ll know that there are many unanswered questions about the past and the present. Mississippi Blood answers those questions and provides a sense of closure, especially on the racially-motivated murders and rapes from the 1960s and ongoing harassment by the Double Eagles. I will warn you, all of these books are lengthy and I’m talking 500+ pages. However, all of these books are incredibly fast reads because the story pulls you in and you won’t realize how quickly time passes as you read page after page after page. I found Mississippi Blood an incredibly fast-paced read that I completed in one day. Mr. Iles doesn’t steer clear of topics or language that might be considered offensive to some but is more than appropriate for the era and people being presented. Mississippi Blood openly discusses rapes, gang rapes, torture, and murder, but all are relevant to the story and done so with a sense of respect for the victims. Yes, Mississippi Blood deals with plenty of difficult topics and it isn’t a lighthearted read by any stretch of the imagination. Mississippi Blood is a respectful and well-written story about a difficult time in our recent past and present. For those of you that have already read the first two books in the Natchez Burning trilogy, you’ll definitely want to grab a copy of Mississippi Blood to read. For those of you that haven’t read the Natchez Burning trilogy and enjoy reading well-written thrillers that incorporate history with the present, you’ll want to read this series. If you couldn’t tell, I thoroughly enjoyed this book and series. I could go on and on about this book and series, but I’ll simply say this, read these books! I’m incredibly grateful to Mr. Iles for writing such a wonderful series of books (actually, I’ve read and enjoyed all of his books but this series stands out) and although I know this is the end of the Natchez Burning trilogy, I’m hopeful this isn’t the last of Penn Cage.
Disclaimer: I received a free digital review copy of this book from the publisher via Edelweiss+ for review purposes. I was not paid, required, or otherwise obligated to write a positive review. The opinions I have expressed are my own. I am disclosing this in accordance with the Federal Trade Commission’s 16 CFR, Part 255: “Guides Concerning the Use of Endorsements and Testimonials in Advertising.”

Greg Iles spent most of his youth in Natchez, Mississippi. His first novel, Spandau Phoenix, was the first of thirteen New York Times bestsellers, and his new trilogy continues the story of Penn Cage, protagonist of The Quiet Game, Turning Angel, and #1 New York Times bestseller The Devil’s Punchbowl. Iles’s novels have been made into films and published in more than thirty-five countries. He lives in Natchez with his wife and has two children. 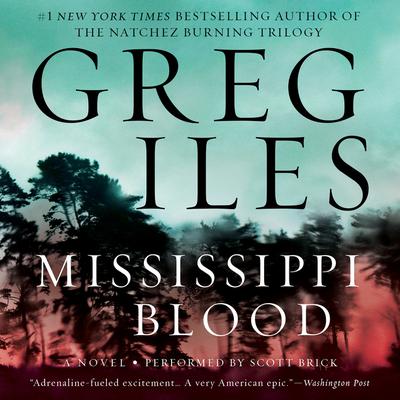