A vivid, unforgettable story of an unlikely sisterhood—an emotionally powerful and haunting tale of friendship that illuminates the plight of women in a traditional culture—from the author of the bestselling The Pearl That Broke Its Shell and When the Moon Is Low.

For two decades, Zeba was a loving wife, a patient mother, and a peaceful villager. But her quiet life is shattered when her husband, Kamal, is found brutally murdered with a hatchet in the courtyard of their home. Nearly catatonic with shock, Zeba is unable to account for her whereabouts at the time of his death. Her children swear their mother could not have committed such a heinous act. Kamal’s family is sure she did, and demands justice.

Barely escaping a vengeful mob, Zeba is arrested and jailed. As Zeba awaits trial, she meets a group of women whose own misfortunes have also led them to these bleak cells: thirty-year-old Nafisa, imprisoned to protect her from an honor killing; twenty-five-year-old Latifa, who ran away from home with her teenage sister but now stays in the prison because it is safe shelter; and nineteen-year-old Mezhgan, pregnant and unmarried, waiting for her lover’s family to ask for her hand in marriage. Is Zeba a cold-blooded killer, these young women wonder, or has she been imprisoned, as they have been, for breaking some social rule? For these women, the prison is both a haven and a punishment. Removed from the harsh and unforgiving world outside, they form a lively and indelible sisterhood.

Into this closed world comes Yusuf, Zeba’s Afghan-born, American-raised lawyer, whose commitment to human rights and desire to help his motherland have brought him back. With the fate of this seemingly ordinary housewife in his hands, Yusuf discovers that, like Afghanistan itself, his client may not be at all what he imagines.

A moving look at the lives of modern Afghan women, A House Without Windows is astonishing, frightening, and triumphant.

When we first meet Zeba, she seems a typical Afghani wife and mother. She lives in a traditional, patriarchal society and knows that, as a woman, she has little if any rights that aren’t given to her by men. Found with the blood of her deceased husband on her hands and no witnesses to his death, Zeba is charged with murder. She must rely upon the system devised by men and governed by men to find justice in A House Without Windows by Nadia Hashimi.
Life in Afghanistan after the Taliban and Gulf War has not been easy for any Afghan citizens, but it is much easier for male citizens than for the female. Women are routinely imprisoned with claims of “zina” or fornication and the system is rigged such that the women are presumed guilty and must prove their innocence beyond any shadow of a doubt. Girls and women that leave abusive households are imprisoned for running away. A woman seen in the company of a man is guilty of fornication. What justice can there be in this type of society for a woman accused of killing her alcoholic and abusive husband? Zeba knows that justice may not be found for her and isn’t even willing to participate in her defense. What she does find is friendship amongst the women in the Chil Mahtab prison. It takes her awhile to acclimate to the prison environment and overcome the fears she has for her children, but slowly Zeba learns the plight of the other women sharing her cell and in the prison.
Growing up, Zeba watched her mother practice jadu or witchcraft and vowed to never have anything to do with these practices. Once she begins to empathize and sympathize with her cellmates, she helps her young pregnant cellmate with a small spell. Even she is amazed when it works and the pregnant teen gets married to the love of her life and is released from prison. Other women in the prison quickly come to her for help and although she doesn’t promise anything, she does promise to pray for each woman in turn. Is it possible that this daughter of a witch and granddaughter of a beloved Islamic leader could possibly help others with either witchcraft or devout prayers? How can she possibly help others when she can’t even help herself?
I have read and enjoyed Ms. Hashimi’s previous books, The Pearl That Broke Its Shell and When the Moon is Low, so it wasn’t very surprising that I’d fall in love with A House Without Windows. I found this to be an engaging if not entrancing read that kept me enthralled until the last page. I simply had to know what would happen to Zeba and the others in the story. It was Zeba’s story, slowly revealed (no, I won’t tell you any more, read the book!) that kept me turning the pages, but I was just as enamored with the story of Yusuf, Zeba’s lawyer. Yusuf was born in Afghanistan and raised in America. He has returned to Afghanistan with the help of ensuring that justice is served for all not just for a select few. As am American Muslim woman, there were parts of this story that made me cringe. It was hard to reconcile the traditional cultural practices found in this story that were couched in pseudo-Islamic values with what I know as un-Islamic values and practices. Does that mean these practices don’t happen? Sadly, the answer is no. Ms. Hashimi has realistically portrayed these somewhat warped practices that occur in not just Afghanistan but across so-called Islamic societies. A House Without Windows is much more than the story of one woman and her fight for justice, it is the story of friendship and survival despite the traditional patriarchal societies these women live in. As I previously mentioned, I’ve read and thoroughly enjoyed all of Ms. Hashimi’s writings and wholeheartedly recommend you read A House Without Windows. I look forward to reading more from Ms. Hashimi in the future.
Disclaimer: I received a free print copy of this book for review purposes. I was not paid, required, or otherwise obligated to write a positive review. The opinions I have expressed are my own. I am disclosing this in accordance with the Federal Trade Commission’s 16 CFR, Part 255: “Guides Concerning the Use of Endorsements and Testimonials in Advertising.”

Nadia Hashimi was born and raised in New York and New Jersey. Both her parents were born in Afghanistan and left in the early 1970s, before the Soviet invasion. In 2002, Nadia made her first trip to Afghanistan with her parents. She is a pediatrician and lives with her family in the Washington, DC, suburbs.

This review brought to you by TLC Book Tours 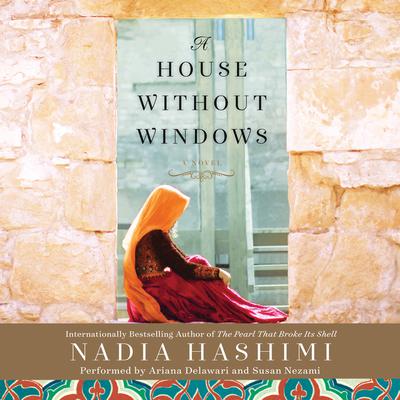