With empathy, grace, humor, and piercing insight, the author of gods in Alabama pens a powerful, emotionally resonant novel of the South that confronts the truth about privilege, family, and the distinctions between perception and reality—the stories we tell ourselves about our origins and who we really are.

Superheroes have always been Leia Birch Briggs’ weakness. One tequila-soaked night at a comics convention, the usually level-headed graphic novelist is swept off her barstool by a handsome and anonymous Batman.

It turns out the caped crusader has left her with more than just a nice, fuzzy memory. She’s having a baby boy—an unexpected but not unhappy development in the thirty-eight year-old’s life. But before Leia can break the news of her impending single-motherhood (including the fact that her baby is biracial) to her conventional, Southern family, her step-sister Rachel’s marriage implodes. Worse, she learns her beloved ninety-year-old grandmother, Birchie, is losing her mind, and she’s been hiding her dementia with the help of Wattie, her best friend since girlhood.

Leia returns to Alabama to put her grandmother’s affairs in order, clean out the big Victorian that has been in the Birch family for generations, and tell her family that she’s pregnant. Yet just when Leia thinks she’s got it all under control, she learns that illness is not the only thing Birchie’s been hiding. Tucked in the attic is a dangerous secret with roots that reach all the way back to the Civil War. Its exposure threatens the family’s freedom and future, and it will change everything about how Leia sees herself and her sister, her son and his missing father, and the world she thinks she knows.

Leia Birch Briggs is a professional graphic artist and novelist. Reasonably happy with her career and her life, Leia is thrown a slight curve when she realizes she’s pregnant after a one-night stand at a recent comic con. The only problem is she isn’t quite sure who the father is…okay, she knows who he is but doesn’t really know his name. Then she receives frantic text messages and calls about her 90-year-old grandmother’s unbecoming behavior. Leia is forced to confront her step-sister’s disintegrating marriage, the mystery surrounding her grandmother’s behavior, and the dilemma of what to do or not do about her pregnancy in Joshilyn Jackson’s latest novel, The Almost Sisters.
Although Leia is well-known and respected in the graphic artist and fan community, to her family she is simply an “artist” and they’re waiting for her to get a real career. It doesn’t matter that Leia has supported herself for more than a decade as a graphic artist/novelist they simply don’t understand that genre or how anyone can make money out of “drawing pictures.” Leia has always perceived herself as somewhat of an outsider within her family, perhaps because her father died before she was born. She loves her mother, stepfather, and stepsister, but she’s always felt that she could never really be as good as Rachel in looks, behavior, or demeanor. It doesn’t really matter that no one wants her to be a Rachel duplicate, but that’s how Leia thinks. Now Rachel’s marriage is on shaky grounds and it doesn’t help that Rachel’s husband is Leia’s first almost, sort-of, maybe, not-quite boyfriend. Leia might have been somewhat disturbed over JJ’s marriage to Rachel, but she’s moved beyond that and is happy for her sister or was happy for sister while she was happy. Now she doesn’t know what to do to make her happy. The only thing she can think of is to take her 13-year-old niece, Lavender, with her to Alabama to check up on her 90-year-old-grandmother, Emily Birch Briggs or Birchie. Upon arriving in Alabama Leia finds out that Birchie is suffering from Lewy body dementia causing her to speak out inappropriately, hallucinate, and more. Until recently, this behavior was moderately well controlled by medication and Birchie’s lifelong friend, companion and roommate Wattie Price, as well as kept secret from Leia, Birchie’s only relative. Without asking Birchie or Wattie their opinions about matters, Leia decides that the estate must be evaluated and appraised and arrangements made for both Birchie and Wattie to move into assisted living. What follows is more like a scene from I Love Lucy and Murder, She Wrote. A steamer trunk is taken from the attic and skeletal remains are found that appear to be over 50 years old. Just who was in that trunk and why? How will the answers to those questions and more impact Birchie, Wattie and the residents of Birchville, Alabama?
Just in case you couldn’t tell, there’s a lot going on in The Almost Sisters, yet I found this to be a compelling story that had me turning page after page to find out what would happen to everyone next. There were parts of this story that had me laughing out loud, seriously I spewed hot tea all over my keyboard at one point (don’t drink or eat anything when reading pages 22-26). There were parts of the story that had me grabbing tissues. The Almost Sisters is a story about love, what we’re willing to do for love, family (the family we’re born into, the family we marry into, and the family we make from those we surround ourselves with), loyalty and community. There are several stories within stories happening here and no I’m not going to tell you all of them, but there’s Leia’s pregnancy story, her internal debate about writing her graphic novel origin story, Birchie and Wattie’s story, Leia and Rachel’s story, race in the South, and more. I loved the small town setting of Birchville, Alabama (there’s something about Southern small towns) and it plays just as much of a character in the story as the others. There are plenty of strong women in this story and I LOVED them all: Leia, Birchie, Wattie, Lavender, and even Rachel. I could go on and on about this story, but if I did then there’d be nothing left to your imagination. I can simply say that if you want to read a well-written story that incorporates humor, grace, a sweet sense of family with realistic and realistically-flawed characters, then you’ll want to grab a copy of The Almost Sisters to read ASAP. I do encourage you to wait until you have a few hours to sit down and read this book because you won’t want to put it down (yes, it is that good). The Almost Sisters is the third novel that I’ve read by Ms. Jackson and as impossible as it sounds, each one is just as good as the one before if not slightly better.  I enjoyed reading The Almost Sisters so much I’ve given a copy to my 82-year-old mother to read and will be recommending it to several of my book groups. This is one book that I’m hoping several of my book groups will want to read just so I will have an excuse to reread it a few more times.
Disclaimer: I received a free digital review copy of this book from the publisher for review purposes via Edelweiss+. I was not paid, required, or otherwise obligated to write a positive review. The opinions I have expressed are my own. I am disclosing this in accordance with the Federal Trade Commission’s 16 CFR, Part 255: “Guides Concerning the Use of Endorsements and Testimonials in Advertising.”

Joshilyn Jackson is the New York Times bestselling author of seven novels, including gods in Alabama and A Grown-Up Kind of Pretty. Her books have been translated into a dozen languages. A former actor, Jackson is also an award-winning audiobook narrator. She lives in Decatur, Georgia, with her husband and their two children. 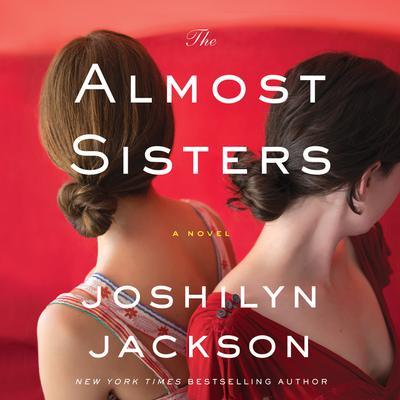