“This contemporary take on a locked-room puzzle is chilling, compelling and completely entertaining, and Claire Booth is a wonderful new voice in crime fiction.”—Hank Phillippi Ryan on The Branson Beauty

It starts out as an interesting little theft case. Branson, Missouri’s new Sheriff Hank Worth is called out to look at stands of trees that have been stripped of their bark, which the property owner had planned to harvest for the booming herbal supplement market. At first, Hank easily balances the demands of the investigation with his fledging political career. He was appointed several months earlier to the vacant sheriff position, but he needs to win the fast-approaching election in order to keep his job. He thinks the campaign will go well, as long as he’s able to keep secret the fact that a group of undocumented immigrants – hired to cut down the stripped trees – have fled into the forest and he’s deliberately not looking for them.

But then the discovery of a murder victim deep in the Ozark backwoods sets him in the middle of a generations-old feud that explodes into danger not only for him, but also for the immigrants, his deputies, and his family. He must rush to find a murderer before election day, and protect the vulnerable in Branson County, where politicking is hell and trespassing can get you killed.

In Another Man’s Ground, her next novel featuring Sheriff Hank Worth, acclaimed author Claire Booth delivers a taut, witty mystery that will grip readers from the opening pages to the breathless conclusion.

It started with a simple phone call about stripped slippery elm bark and quickly become something much more complicated. Sheriff Hank Worth’s investigation into the theft of the bark of a tree used as a herbal remedy evolves into the discovery of not one but two dead and buried bodies, a host of illegal immigrants in his county, and a miss-step that just might cost him the election as sheriff in the second book in the Sheriff Hank Worth mystery series, Another Man’s Ground by Claire Booth.
Sheriff Hank Worth is a transplant to Branson, Missouri from the “city.” He was appointed sheriff a few months back and is now running for election. Although Hank’s wife was born and raised in Branson, Hank isn’t a part of the “good ol’ boy” network and doesn’t have the political clout of his opponent and long-time county deputy sheriff, Gerald Tucker. Hank doesn’t exactly get along with his campaign manager and he’s sure her advice at a local luncheon may have cost him the election. As if dealing with the campaign and all of its drama and fallout wasn’t bad enough, Hank must also keep under wraps the illegals he found while investigating the bark theft, attempt to discover the identity of the two dead bodies buried years apart, discern why they were killed and disposed of, and handle a family that can only be described as bad-tempered and ornery if not deadly when crossed. Can Hank find the answers to the theft, identify the remains and killer, and do so before the election?
Another Man’s Ground is the second book in the Sheriff Hank Worth mystery series by Claire Booth but the first book that I’ve read (a situation that will be quickly remedied I assure you). I found this to be a fast-paced, engaging, and enjoyable read despite constant interruptions due to travels between hospitals and nursing homes, nursing home drama, back-to-back-to-back migraine headaches, and more. I enjoyed the personal and workplace drama that Hank encounters and found him to be a realistic and believable character. I actually liked most of the characters in this story, including the colorful, crusty and cantankerous Jasper Kinney, campaign manager Darcy Blakely, and Hank’s co-workers — Alice and Sheila (I really liked Sheila). Another Man’s Ground is a taut mystery that provides humor with the twists and turns in the story, mixing family drama, big city boy versus small town boy, and more. Although I didn’t read The Branson Beauty (again, something that will be rectified soon), I didn’t feel as if I coming into this series and missing too much backstory (of course I could be wrong). If you’ve read The Branson Beauty, then I’m pretty sure you already have Another Man’s Ground on your TBR list (if not, add it ASAP). If you haven’t read The Branson Beauty, then I strongly urge you to read it and grab yourself a copy of Another Man’s Ground to read immediately afterward. I look forward to reading more in this series and consider myself fortunate to have been introduced to this new-to-me author and series.
Disclaimer: I received a free digital review copy of this book from the publisher for review purposes via NetGalley. I was not paid, required, or otherwise obligated to write a positive review. The opinions I have expressed are my own. I am disclosing this in accordance with the Federal Trade Commission’s 16 CFR, Part 255: “Guides Concerning the Use of Endorsements and Testimonials in Advertising.”

Read an excerpt from Another Man’s Ground here.

Claire Booth is a journalist and author who has written about crime for decades. She’s covered everything from the theft of the Aston Martin used in the James Bond film Goldfinger to the Laci Peterson murder and the San Francisco dog mauling case, where two lawyers were convicted of killing their neighbor with vicious dogs they kept for an imprisoned friend.
She also covered the case of Taylor Helzer, a Northern California man who convinced two followers he was a prophet of God. In order to raise money for their end-of-days scheme, the group extorted money from a retired couple and then killed them and three others to cover their tracks. The tremendously complicated quintuple murder case is the basis for her first book, the non-fiction The False Prophet: Conspiracy, Extortion, and Murder in the Name of God.
After living with that case for so long, Claire decided she’d had enough of the real world and turned to fiction. Her first novel, The Branson Beauty, was published in 2016, and the second in the series, Another Man’s Ground, came out in July 2017. 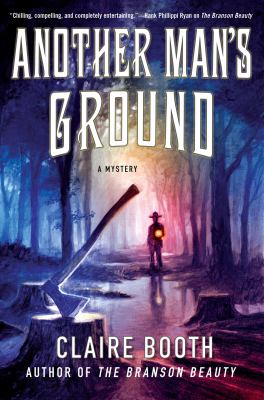