Fans of Janet Evanovich and Carl Hiaasen, get ready. If you haven’t yet discovered wisecracking sleuth Stewart “Hoagy” Hoag and his faithful basset hound Lulu, you’re in for a sharp, hilarious treat…

Once upon a time, Hoagy had it all: a hugely successful debut novel, a gorgeous celebrity wife, the glamorous world of New York City at his feet. These days, he scrapes by as a celebrity ghostwriter. A celebrity ghostwriter who finds himself investigating murders more often than he’d like.

And once upon a time, Richard Aintree was the most famous writer in America — high school students across the country read his one and only novel, a modern classic on par with The Catcher in the Rye. But after his wife’s death, Richard went into mourning… and then into hiding. No one has heard from him in twenty years.

Until now. Richard Aintree — or someone pretending to be Richard Aintree — has at last reached out to his two estranged daughters. Monette is a Martha Stewart-style lifestyle queen whose empire is crumbling; and once upon a time, Reggie was the love of Hoagy’s life. Both sisters have received mysterious typewritten letters from their father.

Hoagy is already on the case, having been hired to ghostwrite a tell-all book about the troubled Aintree family. But no sooner does he set up shop in the pool house of Monette’s Los Angeles mansion than murder strikes. With Lulu at his side — or more often cowering in his shadow — it’s up to Hoagy to unravel the mystery, catch the killer, and pour himself that perfect single-malt Scotch… before it’s too late.

Stewart Stafford Hoag was once a literary darling. He’d written “the” debut novel, was in love with a beloved by a darling of Broadway, and was considered the toast of literary New York. Sadly, that was over ten years ago and now Stewart is divorced, no longer the toast of New York or anywhere else for that matter, and considered a has-been writer who makes his living ghost-writing celebrity memoirs until he is offered the chance of a lifetime. His literary agent offers him the chance to write the memoir of the highly reclusive Richard Aintree, father of his former lover, Regina Aintree, or The Girl With Kaleidoscope Eyes in David Handler’s latest addition to the Stewart Hoag series.
Let’s take a step back in time to the early 1990s. It’s pre-internet, the beginning of the cell phone era, and personal computers are just becoming a thing along with fax machines. It’s also a time of big hair and daytime talk television is coming into its own. Stewart “Hoagy” Hoag is a man just trying to bide his time with his four-legged companion, the beloved Lulu while eschewing many of these newfangled machines. He relies on his trusty 1950s typewriter to do his writing and is quite pleased with that. He hasn’t had a serious relationship since his divorce and no longer owns a car since he lost it in the divorce settlement. He now has an opportunity to reconnect with one of the most important people from his past, Regina Aintree, write her father’s memoir, and make some money at the same time. If only things worked out as simply as all of that. Regina’s older sister, Monette, is in the midst of a highly-publicized LA separation and divorce. Regina and Monette haven’t spoken to one another in over twenty years. Monette’s husband is an actor on a hit television show and has reportedly gotten one of his teen co-stars pregnant. Just when you think things couldn’t possibly get any stranger, there’s the sleazy literary agent working alongside Hoagy’s agent on this book deal, Monette’s equally sleazy agent, Monette’s soon-to-be ex-husband’s expectant baby-mama drama, and more…murder. Is it possible Hoagy can find out what really happened before the Aintree family is truly destroyed legally and publicly?
The Girl with Kaleidoscope Eyes by David Handler is the first book in the Stewart Hoag series that I’ve read and I honestly don’t know why this series hasn’t crossed my path before. I found this to be a very fast-paced and highly entertaining read, although I do take great exception with the author’s comments about Whitney Houston not being able to sing. I rather liked the throw-back to the 1990s, as well as Hoagy and Lulu. Mr. Handler has crafted some interesting characters and the interplay between siblings Regina and Monette, as well as Danielle and Joey (Monette’s children) definitely added to the story in my opinion. I also enjoyed the drama with the housekeeper Maritza, not to mention the sleazebag agents Boyd and Elliot. If you enjoy reading mysteries and are looking for a well-crafted and fast read, then you may want to grab a copy of The Girl With Kaleidoscope Eyes to read. If you’ve read the previous titles in the Stewart Hoag series by David Handler, I probably don’t have to tell you to go out and grab yourself a copy of this book to read. The Girl with Kaleidoscope Eyes provides family drama, relationship drama, mayhem, murder, and mystery…what more can any reader want from a good book?! I’m glad I got the opportunity to read this book and I’ll be adding the previous titles in this series to my already massive TBR list.
Disclaimer: I received a free print advance reader copy of this book from the publisher for review purposes via TLC Book Tours. I was not paid, required, or otherwise obligated to write a positive review. The opinions I have expressed are my own. I am disclosing this in accordance with the Federal Trade Commission’s 16 CFR, Part 255: “Guides Concerning the Use of Endorsements and Testimonials in Advertising.”

David Handler has written nine novels about dapper celebrity ghostwriter Stewart Hoag, including the Edgar and American Mystery Award-winning, The Man Who Would Be F. Scott Fitzgerald, as well as eleven novels in the bestselling Berger & Mitry series. He lives in a 230-year-old carriage house in Old Lyme, Connecticut. 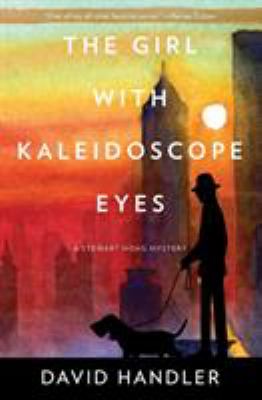