Jane Hawk—fiction’s most relentless, resourceful, stunning new heroine—continues her battle against a murderous conspiracy in the riveting sequel to The Silent Corner.

“No time to delay. Do what you were born to do. Fame will be yours when you do this.”

These are the words that ring in the mind of mild-mannered, beloved schoolteacher Cora Gundersun—just before she takes her own life, and many others’, in a shocking act of carnage. When the disturbing contents of her secret journal are discovered, it seems certain that she must have been insane. But Jane Hawk knows better.

In the wake of her husband’s inexplicable suicide—and the equally mysterious deaths of scores of other exemplary individuals—Jane picks up the trail of a secret cabal of powerful players who think themselves above the law and beyond punishment. But these ruthless people bent on hijacking America’s future for their own monstrous ends never banked on a highly trained FBI agent willing to go rogue—and become the nation’s most wanted fugitive—in order to derail their insidious plans to gain absolute power with a terrifying technological breakthrough.

Driven by love for her lost husband and by fear for the five-year-old son she has sent into hiding, Jane Hawk has become an unstoppable predator. Those she is hunting will have nowhere to run when her shadow falls across them.

Jane Hawk, a twenty-something former FBI-agent, is still grieving the murder-by-suicide of her beloved husband Noah. Their five-year-old son, Travis, has been safely hidden away from the people behind her husband’s murder. Jane doesn’t know how high up in the government this group goes, but she does know it has ties to the NSA and possibly the FBI, as a result, she can’t trust any of her former colleagues. She’s now relying on the criminal connections to stay one step ahead of the group that wants her and thousands of others dead. After rigorously questioning a California attorney with ties to one of the leaders of the group, Jane learns that the group has ties to a small town in Kentucky. Meanwhile, in rural Minnesota, a beloved local teacher commits an action that no one understands. Cora Gundersun drives her SUV, containing numerous gasoline-filled canisters that she then sets afire, into a historic inn and restaurant killing dozens of people. Why? Because she was told to do so by the spider in her brain. The local sheriff, Luther Tillman, discovers the reason for Cora’s actions and refuses to take part in the government cover-up. He also learns that Cora hasn’t been quite the same since she returned from Iron Furnace Lake, Kentucky. Both Jane and Luther converge on Iron Furnace Lake and what they found is shocking (no I won’t tell you what they find, read the book!). Will they join forces? Can they protect their families? Will they be able to stay one step ahead of this all-powerful group?
Jane Hawk, star of The Silent Corner, returns to right wrongs, fight for truth, justice, and battle unseen forces of evil in The Whispering Room by Dean Koontz. I enjoyed reading The Silent Corner so much that I re-reread it before reading The Whispering Room (yes, you read that right, I’ve read it twice so far this year). Jane is not your typical hero, as she no longer functions in shades of black and white, keeping everything legal and aboveboard. She now has to function in the shades of gray just to stay alive. Just as the group consistently underestimates Jane, they also underestimate Luther Tillman, as he’s initially written off as a simple, local sheriff with a third-tier college education and obviously no threat to these Ivy-league educated powerbrokers. There’s a lot of action in The Whispering Room and just enough tech explanations to make you never want to touch a computer, tablet, or smartphone ever again. As with The Silent Corner, The Whispering Room is a story about family, friends, trust, power gone wrong, corruption, and more. There’s also drama, action, and humor. Just in case you couldn’t tell, I thoroughly enjoyed The Whispering Room and found it to be a fast-paced and engrossing read. For those of you that enjoy reading suspense thrillers, then I strongly recommend you grab a copy of The Silent Corner and The Whispering Room to read. For those of you that have already read The Silent Corner, I know you’ll want to get a copy of The Whispering Room to read to find out what happens next. I’m looking forward to reading the next Jane Hawk installment, The Crooked Staircase, coming in the Spring of 2018 (and yes, I’ll be re-reading The Silent Corner and The Whispering Room).
Disclaimer: I received a free print review copy of this book from the publisher via NetGalley. I was not paid, required, or otherwise obligated to write a positive review. The opinions I have expressed are my own. I am disclosing this in accordance with the Federal Trade Commission’s 16 CFR, Part 255: “Guides Concerning the Use of Endorsements and Testimonials in Advertising.” 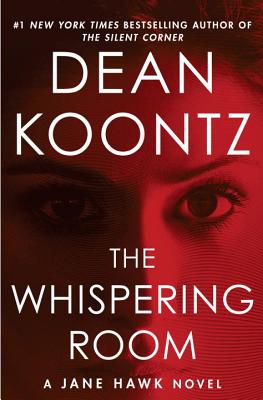