The Civil War has turned neighbor against neighbor—but for one scientist spy and her philosopher soldier, war could bind them together . . .

For three years of the War Between the States, Marlie Lynch has helped the cause in peace: with coded letters about anti-Rebel uprisings in her Carolina woods, tisanes and poultices for Union prisoners, and silent aid to fleeing slave and Freeman alike. Her formerly enslaved mother’s traditions and the name of a white father she never knew have protected her—until the vicious Confederate Home Guard claims Marlie’s home for their new base of operations in the guerrilla war against Southern resistors of the Rebel cause.

Unbeknownst to those under her roof, escaped prisoner Ewan McCall is sheltering in her laboratory. Seemingly a quiet philosopher, Ewan has his own history with the cruel captain of the Home Guard, and a thoughtful but unbending strength Marlie finds irresistible.

When the revelation of a stunning family secret places Marlie’s freedom on the line, she and Ewan have to run for their lives into the hostile Carolina night. Following the path of the Underground Railroad, they find themselves caught up in a vicious battle that could dash their hopes of love—and freedom—before they ever cross state lines.

Marlie Lynch was born as a free Black and raised by her mother, Vivienne, in eastern North Carolina for the first thirteen years of her life. Then things changed. A white woman, Sarah Lynch, came to their home, claimed Marlie as family and took her back to the Lynch’s ancestral home, Lynchwood. Marlie was viewed by many as a “witch woman” simply because she was born with heterochromia or two different colored eyes, one brown and the other hazel/green. But Sarah didn’t see this as anything abnormal and ensured Marlie received an education, was allowed to participate in Unionist activities (if so desired), as well as further her scientific exploration into herbalism and aromatherapy. Marlie began using the skills she learned from her mother as a natural healer and the scientific knowledge of herbalism to help neighbors, escaping slaves and Freemen, and even Union soldiers at a local prison. It is at the local prison that Marlie is able to utilize another skill as a member of the Loyal League by receiving and sending coded messages from prisoners and others. One of the prisoners that she’s built up quite a rapport with is a man she refers to as Socrates or Ewan McCall. Prison life is harsh but endurable until the Confederate Home Guard takes over and the leader of the Home Guard becomes a frequent visitor then a permanent guest at Marlie’s home. Then Marlie is treated with disdain and even threatened with enslavement (not just slavery but sold into prostitution). Her only option is to find refuge in her quarters. That refuge becomes all the more important when there’s a prison break, Ewan is one of the few prisoners to get away, and he’s hidden away in a secret space in Marlie’s quarters. Then Ewan and Marlie stumble upon a secret that almost destroys Marlie. Can these two formidable former philosophical sparring partners become friends fighting a battle against a common enemy? Is it possible for Marlie’s family to stand up to the Home Guard and protect her or will she need to run away? Can Ewan keep his promise and protect Marlie at all cost?
A Hope Divided is the second story in the Loyal League series by Alyssa Cole and takes place during the Civil War era. Once again, the story features a strong, educated, and independent-minded female and a strong, cocky, male. It was a fast-paced and emotionally engaging read. What makes these stories such a nice change of pace for me is that the women are often the ones to the rescue although they are periodically in need of rescuing as well. Yes, there’s romance, it is an HEA, but there’s also history, a strong sense of the turmoil of the time, drama, and more. I enjoy the way Ms. Cole blends the history of the time with the storyline, the Resistors, the Unionists, the inherent dangers of those involved in the Loyal League, and the way the Confederate Home Guard had little regard for its treatment of women or children, much less men be they Confederates or not. All is not happy and light in A Hope Divided even though it does end with a Happy-Ever-After. If you read An Extraordinary Union then I strongly encourage you to get a copy of A Hope Divided to read. For those of you that enjoy historical romance, especially Black historical romance, if you haven’t read An Extraordinary Union, then go grab a copy, read it, then get a copy of A Hope Divided to read. I’m hoping there will be more historical romance from Ms. Cole in the future, especially in the Loyal League series as I’m hooked. 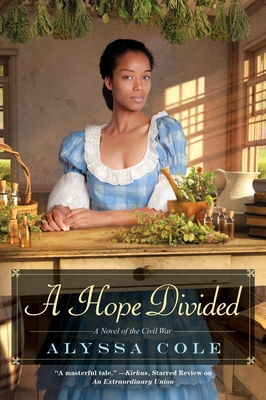