The year is 1898. Wilde’s once esteemed reputation is in ruins.

After the scandal, after the trial, and after the incarceration at Reading Gaol, Wilde lives in precarious exile in Paris. His friends urge him to start another great work, a new play or poem. But Wilde’s attention is elsewhere: on the mysteries of art, on the demands of love, and on a final great flowering of the spirit.

Turning the corner at the Avenue de l’Opéra, intending to head north, it was actually difficult to walk despite the fact that the night before he’d slept better than he had any right to expect, that he carried his cane, and that he’d already braced his nerves with a glass of Armagnac at a café three streets back. He wore the best of his suits, the only one that evidenced no sign of stain or tearing, the one with the least obvious end-of-life smell. The one he reserved for those times, even now, when it seemed important to impress. He’d used the last of his current resources to get his shirt pressed and his shoes shined—and for the drink, of course. He would not eat later in the day and probably for the next one as well, unless he could find a café or restaurant willing to extend him credit. Virtually no chance of that.  And he had to hope that Douglas would be willing to cover the cost of whatever they consumed during this meeting. Surely they would consume something. This was too significant a conference for them to simply gab and leave. Certain diplomatic—to say nothing of Parisian—protocols would need to be respected.

But Wilde couldn’t know. He couldn’t know what Douglas was planning exactly—assuming Douglas himself even did—he couldn’t know if the boy had guessed in advance what he was here to tell him and what that might mean. Bosie might come primed for battle or for reconciliation; but Oscar well knew from all his years of association with Lord Alfred Douglas that no matter what Bosie came primed for he was capable of changing his mind in seconds.

Ahead of him lay the busy business of the avenue, including, blocks away from where he presently stood—bloated and unsteady on his feet—the intersection with the Boulevard des Capucines, on the other side of which sat the Café de la Paix. That was where Douglas had agreed to wait for him, after specifying that he would not visit Oscar at his “atrocious” place of residence. Wilde had never eaten at the famous—and expensive—café, which sat on the bottom floor of the Grand Hotel, although Louis Latourette and Ernest La Jeunesse and Jean Moréas and several others had said kind things about the place.  He’d started the morning hoping he would finally have the opportunity to take a meal there. But now, standing on the street, close enough to spy the café’s actual location, Wilde wasn’t sure if his stomach was in good enough shape to handle anything more than a stiff drink. Probably after the meeting was concluded he would be ravenous, no matter what kind of answer he got from his old lover. But he was nothing but nauseous with tension now. As he stood and wavered and squinted, he thought that he ought to be able to see the amazing sunlight of Bosie’s hair, the exquisite sculpture of his forehead, the needy intensity of his eyes, even from this far away. But, of course, all he could see was colored awnings, chairs assembled on the sidewalk, shadowy bodies leaning or bending or sitting. He was not close enough yet for a truly clear view. He couldn’t just stand here. He had to move forward if he ever wanted to see.

John Vanderslice teaches creative writing at the University of Central Arkansas. His short stories, poems, essays, and one-act plays have been published in scores of literary journals, including Seattle Review, Sou’wester, Laurel Review, South Carolina Review, 1966, and Crazyhorse. His linked book of short stories Island Fog (Lavender Ink) was named by Library Journal as one of the Top 15 Indie Fiction Titles of 2014. His historical novel The Last Days of Oscar Wilde is forthcoming in January 2018 from Burlesque Press. 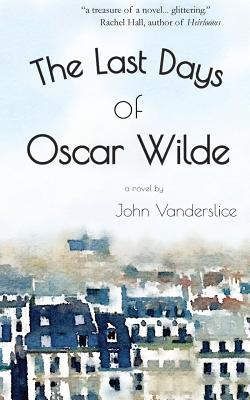