Diane Thompson wakes up in the backseat of her car, shocked to find she’s acquired a chauffeur. Realizing she’s been inadvertently kidnapped, she swears off tequila—and Chili’s—then dials 9-1-1. But her rescue comes at a cost. Her savior, too-macho-for-words Lt. Cole Anderson, refuses to let Diane out of his sight until her kidnappers are apprehended. He’s already lost one woman he cared about due to his inattention; he’s not letting it happen a second time.

But Diane isn’t a damsel-in-distress type of girl. When it turns out the criminals left a valuable item in her car and they want it back, involving Cole isn’t part of her plan and not only because the criminals have forbidden her from involving the cops. Men are like birds—messy, easily distracted, and only around when there’s something to eat. She’s got this. All she has to do is find and return the item in question to the drug runners threatening her life, survive a high-speed car chase, and keep her vow to never trust a man with her heart.

Some people are just magnets for disaster and Diane Thompson is just such a magnet. A simple dinner out with her cousin has her attempting to sleep off too much tequila and ends up with an inadvertent kidnapping when her car is stolen by drug dealers. Why her car? Well, it was one of the few left in the lot and it was an older vehicle without all the whistles and bells and therefore easier to steal. Little did the thieves know that there was someone in the back seat hidden by all of the bags slated to be dropped off at a local Goodwill. Good thing Diane is something of a procrastinator. The would-be carjacking/kidnapping is quickly squashed when Diane calls 911 and is rescued. Diane is also a bit clueless because the local lieutenant, Cole Anderson, at the sheriff’s department has been attempting to get her attention for more than a month. He has it now in spades. What follows is a series of calamitous events that make it clear these drug dealers know not only where she lives and works, but also know everything about her family as well. Diane isn’t one to depend on others for help and she’s determined to find what the drug dealers want before it’s too late for her and her family. The big question is can she do it without alienating Cole and saving herself and her family?
Crazy on You by Nicole Terry is the first in a new series and a debut as well. I found this to be a sexy, sassy, raucous, rollicking laugh-out-loud read that reminded me at times of books by both Joshilyn Jackson with the Southern sensibilities and Beverly Jenkins with the strong female and take-charge male protagonists. Diane is kind of a modern-day-equivalent of Lucy Ricardo from “I Love Lucy” fame in that she always seems to find herself in the midst of trouble and it’s up to her family and Cole to bail her out (FYI, she does a darn good job of bailing herself out a few times). Cole is a “by-the-book” lawman that has a “don’t-mess-with-my-woman” mentality. He doesn’t see Diane as fragile or weak, he just wants to protect her and her family from the bad guys as best as he can. Yes, there’s an obvious romance angle between Diane and Cole, but there’s also insecurity issues, family drama, small-town drama, crime, and more. There are bad guys along with the good guys and there are varying degrees of bad guys (trust me on this and read the story to understand what I mean by this statement). I’m always a sucker for stories set in West Virginia or written by West Virginia authors and I lucked out on both counts with Crazy on You by Nicole Terry. I recommend Crazy on You for those of you that enjoy reading romantic suspense. For those of you looking for a madcap, comedic romance read, then I encourage you to grab a copy of Crazy on You to read. I wholeheartedly enjoyed reading Crazy On You and can’t wait to more from this author in the future.

Disclaimer: I received a free digital review copy of this book from the author. I was not paid, required, or otherwise obligated to write a positive review. The opinions I have expressed are my own. I am disclosing this in accordance with the Federal Trade Commission’s 16 CFR, Part 255: “Guides Concerning the Use of Endorsements and Testimonials in Advertising.”

Read an excerpt from Crazy On You here. 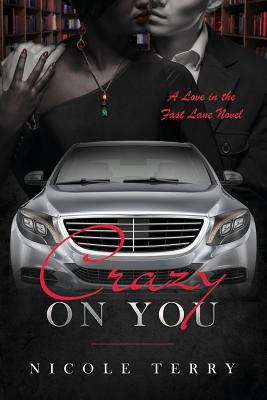