From USA Today Bestselling Author Beverly Jenkins comes a new novel in a mesmerizing series set in the Old West, where an arranged marriage becomes a grand passion . . .

What kind of mail-order bride greets her intended with a bullet instead of a kiss? One like Regan Carmichael—an independent spirit equally at home in denims and dresses. Shooting Dr. Colton Lee in the shoulder is an honest error, but soon Regan wonders if her entire plan to marry a man she’s never met is a mistake. Colton, who buried his heart along with his first wife, insists he only wants someone to care for his daughter. Yet Regan is drawn to the unmistakable desire in his gaze.

Regan’s far from the docile bride Colton was expecting. Still, few women would brave the wilds of Wyoming Territory for an uncertain future with a widower and his child. The thought of having a bold, forthright woman like Regan in his life—and in his arms—begins to inspire a new dream. And despite his family’s disapproval and an unseen enemy, he’ll risk all to make this match a real union of body and soul.

Regan Carmichael has an adventurous soul. When she lived with her Aunt Eddy and Uncle Rhine she drove the mail wagon locally and was always up for the next new adventure. When her sister Portia gets engaged, Regan knows that she needs to get away from home to begin her next adventure as a mail-order bride. After Portia’s wedding, Regan leaves the comfort of friends, family, and the familiar in Arizona to travel to Wyoming to marry a local doctor with a young daughter. All is going well until the wagon coach she’s traveling in is attacked by would-be robbers and Regan helps thwart their attempts by shooting at them. Moments later another group of riders approach the coach and once again Regan begins shooting. Unfortunately this time she’s shooting at the good guys and actually hits her intended. Dr. Colton Lee was expecting someone as docile and passive as his deceased wife and that’s definitely not Regan Carmichael. To say their relationship starts off on the wrong foot is a massive understatement. It continues in a downward spiral when Dr. Lee’s grandfather decides he doesn’t like Regan even before he meets her, Dr. Lee is upset to find out that Regan isn’t a virgin, her mother was a prostitute, she has opinions of her own (not to mention her own money), and she thinks that a husband and wife should share the same bedroom. The only plus in all of this is that Dr. Lee’s daughter, Anna, and his sister, Spirit, both like Regan and want her to stay. After deciding to get married for the sake of his daughter, the question becomes can they make the marriage work and become a united family or will Regan’s adventurous nature destroy their chance for marital success?
Tempest is the third book in the Old West/Rhine Fontaine series by Beverly Jenkins, aka Queen Bevy aka Slayer of Words. These books are all set in the West after the Civil War when the country was growing by leaps-and-bounds and the rights of freed Blacks and other people of color were sorely being trampled upon. Each book in this series presents historical tidbits that make me increase my TBR list by at least 2-3 books. Tempest presents historical information about the founder of Howard Medical School as well as information about germ theory in medical treatment, something radically new at the time. Tempest also presents a fiery relationship between Regan and Colton, interesting family dynamics for both Regan and Colton, details of the hard life in the West for minorities and women, and more. Ms. Jenkins can always be counted on for providing an intelligent, steamy historical romance, but she also imbues her characters with such charm and essence that they become part of the family. It has been fascinating watching Regan grow from her first presentation in Forbidden through Tempest, as well as watching the unending romance between her aunt and uncle throughout all three books. There are scoundrels, robbers, kidnappers, and more in this story and if you want to find out just what happens you’ll need to read the book. If you haven’t read Forbidden and Breathless, the first two books in this series, I strongly encourage you to grab copies of those to read along with a copy of Tempest. Seriously, if you’re into historical romance or romance you’ll want to read this series. Just in case you couldn’t tell, I enjoyed reading Tempest and am wondering if we’ll be seeing more in this series next year. I can only hope this isn’t the end of the Old West series (hint, hint). If it is, I’ll simply spend a few days next year revisiting Eddy and Rhine in Forbidden, Portia and Kent in Breathless, and Regan and Colton in Tempest to get my Old West reading fix in. 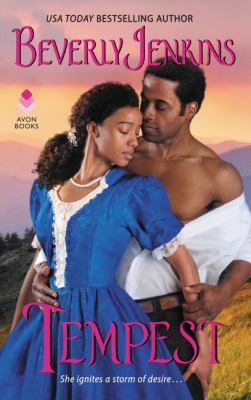