The rules: Communicate only through text messages and never reveal our real names or other personal details.

My name is Ean Montgomery. After the drunk-driving accident that killed my wife, son, and unborn daughter, I was forced to see a grief counselor. In an unconventional move, she gave me a private cell phone and the first initial of the name of a woman who had been widowed by the same accident. I had no intention of ever texting her but with all hope and the will to live gone, I found myself quickly slipping down the rabbit hole. Desperate, lonely, and unbelievably sad, I reached out to her and she became my everything.

My name is Dani Adams. I was married to my college sweetheart, the love of my life. Together we were raising our four-year-old daughter and running a successful business. Then the accident happened and life as I knew it ended in the blink of an eye. I didn’t want to answer his text but I was barely hanging on by a thread and he was in tremendous pain, so I replied. And once again, my world was forever changed.

I can’t lose you, I won’t survive…

Over the course of a year, through texting alone, we bond. Friendship blossoms into something deeper. We were never supposed to meet, but fate had other plans, and into this world of loss and despair, something amazing began to grow… But can the passion we’ve found sustain itself with the deep, soul-twisting pain that never seems to fade?

Where did you grow up/live now?  I was born and raised in Los Angeles,  moved to the South Bay when I met my husband, and then relocated to the  Conejo Valley when my oldest son, Jason, started middle school.
Do you have kids and/or pets?  I have two sons. Jason graduated from Rutgers, and stayed there, while my youngest, Brian, is about to start design school. I’ve never owned a cat but may get one. I lost my Goldendoodle, Norman, last year, and my labradoodle, Maddie, is lonely. Look for my tribute to Norman in the back of my book.

Who are some of your favorite authors?  My son Brian is gay and I wanted to be there for him, to guide him. So I turned to gay romance novels. I’m now completely addicted to them. People who live in the LGBTQ+ community have much higher hurdles they have to scale, so the love they share is much deeper than straight couples. Most of the time they’re better than mainstream books. NR  Walker is my favorite M/M author. I also love Riley Hart, Lucy Lennox, Alexa Land, and Pandora Pine to name a few. When I read “straight” romance novels, I tend to lean toward Contemporary and romantic comedy. My favorite M/F author is Sandi Lynn. Other one-click authors are Adrianna Locke, Corinne Michaels, BN Toler, and Kristen Callahan.
What do you like to do when you are not writing? When I’m not writing, I’m reading. I  could spend the day writing, and still, want to read. My goal with  Goodreads is 200 books. And, when I’m not reading, I can be found being creative in other ways. Brian designs fashion, and I love sewing with him. I also love designing jewelry, scrapbooking, and making gift baskets. Look for some of the fun giveaways, coming in the near future, many of them will be handmade.

What are some things unique to your books?  Aside from adding details that make it seem like you’re watching a movie, I love quotes, or as my husband calls them, Squotes. It’s something you’ll see throughout my book. You also don’t find many books on the market where the main characters share chapters. Originally, I had five, but, over time, I narrowed it down to two. In the scene where Ean quotes Dani, mimicking her slurring her words, I actually slurred into my phone and let autocorrect do its thing. Also, in my second book, Josh talks with his mouth full. I shoved a bunch of crackers in my mouth and repeated his words. It was both messy, and effective.

Where/When do you best like to write?  I have a small deck off my bedroom. I bought an oversized chair from Costco, and spend my days writing with my laptop on a polka dot, pillowed LapDesk. I’m a night-owl and find I write the best when the moon’s miling in the night sky.

When did you first realize you wanted to be a writer? Or what first inspired you to write?  Let’s start with the first question. Until three years ago,  I  never read a book that I wasn’t required to read. Eleven years ago, my son Brian went away to summer camp. My husband and I decided to take advantage of our time off, hopped in my car and took a road trip up the West coast, from California to Washington. We were in Oregon, nine hours away, when the call came in that  Brian had had a seizure. It was the hardest drive of my life. Thankfully, we got in touch with my mother, so I knew he wasn’t alone. When I got there, I was a  basket-case, and that’s where the double-edged sword of having my mother there came into play. She handed me a little blue pill, to calm me. She then gave me a  few more. She also gave me the name of a “dirty” doctor and told me what to say.  The little blue pill was Xanax. By the time I ended my addiction, which was eight years later, I was, not only taking twelve to fourteen milligrams a day, I was also hooked on over a dozen prescription drugs. In 2014, I traveled to Ireland and ran out of most of them. The withdrawal was so bad, I spent the entire time there in the hotel room. When I got home, I was in the doctor’s office bright and early the very next day. Six months later, I was back in the same boat. The only difference was, this time I was still in California. That was when I said, “Enough is enough,” and flushed every other pill I had. In hindsight, it was completely the wrong way to quit. Three years later, I still feel the effects, especially when I’m stressed. So this brings me to the second question. Dani and Ean inspired me to write. Six months after I stopped the pills, I was in bed in that space between consciousness and subconsciousness when Dani and Ean came to me. The best way I can describe it is…like watching a movie. I felt their pain with such intensity it took my breath away. I got up, opened notes on my iPhone, since I didn’t own a laptop, and my thumbs got to work.

What are some of the most surprising things you learned in creating your books?  Keep your ears open and your mouth closed. Ideas can come from anywhere. And it really does take a village. I originally published my book August of last year. When the reviews came in, I not only read them, I got in touch with the people who wrote them. Best. Move. Ever! I got great advice and made a ton of new friends. It’s because of them that I re-opened Saving Each Other and spent the last four months revising it. Look for their names on the acknowledgment page. And, don’t even get me started on the amazing women who helped me make my book what it is today, Stacey Blake, Judy Zweifel, Francine LaSala, and Sara Kocek.

When you are struggling to write/have writer’s block, what are some ways that help you find your creative muse again?  Writer’s block isn’t an issue for me. Saving Each Other is the first in a series of five books. I wrote my second book, Saving Them, a month after my first, and I also wrote it in a month. The last three in the series, Saving Ourselves, Saving Christmas, and Saving  Maybe, are partially written and completely mapped out. Going back to “ideas can come from anywhere,” I was in San Francisco last year and met an amazing man,  who sadly was homeless. While talking to him, a sequel series, The Finding Series, played out in my mind. It’s all their kids. Even though I haven’t experienced “Writer’s Block,” I have times when I’m uninspired. My words come from my characters, their voices roll through me. So, for the times I can’t hear them, I found that stepping back usually does the trick. By the time I start writing again, the words are much easier to find. Brian helps too. He’s my official “name” man. Other than the main characters, he named everyone. Talking it out helps too. I bounce ideas off my best friend, Leslie, and after a half an hour, I’m good to go.

What was your greatest challenge in writing this book?  You won’t see it,  because I’m surrounded by such amazing women, but I suck at grammar! Like legitimately suck!

What is the one book no writer should be without?  One word…Thesaurus!

Stacy Mitchell was born and raised in Los Angeles and lived in the South Bay for 20 years before moving to the Conejo Valley. She lives with her husband of 29 years and is the mom of two grown sons. When she’s not writing, she spends her time reading, hiking in the Santa Monica mountains or enjoying a glass of cabernet.

Enter to win a print copy of Saving Each Other by Stacy Mitchell courtesy of PR By the Book. This giveaway is open to residents of the United States and Canada only, anyone not residing in these two countries will be disqualified. This giveaway will run from 12:01 AM ET on Thursday, May 17, 2018, through 11:59 PM ET on Tuesday, May 22, 2018. The winner will be announced by 10:00 AM ET on Wednesday, May 23, 2018. All entrants must use the Rafflecopter form below. 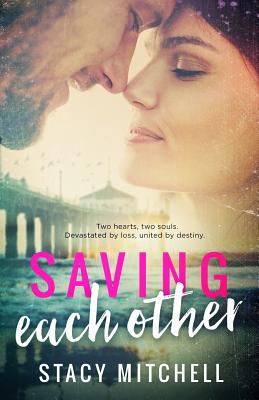 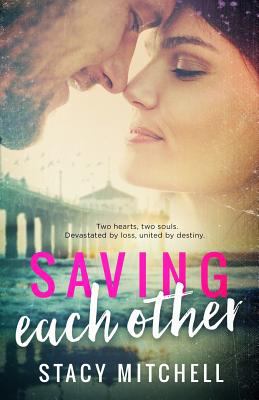