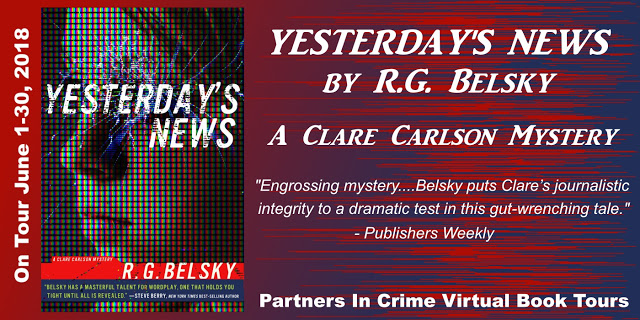 Good day my bookish peeps. Today, I’m pleased to host a visit from the award-winning author of the Gil Malloy mystery series, R.G. Belsky. Mr. Belsky is debuting a new mystery series featuring Clare Carlson with Yesterday’s News. He has graciously agreed to spend a few minutes on the oft-discussed issue of character likeability. Thank you, Mr. Belsky, for taking time out of your busy schedule to visit with us today and I turn the blog over to you.

DOES A CHARACTER HAVE TO BE LIKEABLE?

One of the first rules I learned when I started writing mystery novels was that your protagonist – whoever he or she might be – has to be someone the reader likes.
The protagonist can make mistakes.
Do bad things.
Frustrate everyone on a lot of levels.
But, in the end, you must create a sympathetic character that the reader can relate to easily.
That’s certainly been true of most of the popular mystery characters I’ve followed over the years. Philip Marlowe. Spenser. Harry Bosch. Kinsey Millhone. Matt Scudder. All flawed in different ways, of course, but basically good people. Honest. Trustworthy. And, most of all….well, likeable.
I’ve tried to do the same thing in Yesterday’s News, my new mystery featuring Clare Carlson – a woman TV journalist in New York City. Clare does a number of unpleasant things along the way (actually more unpleasant things than I envisioned when I started the book), but I think she’s still very likeable in the end.
So yes, I followed the rules when it came to creating a likeable character.
But what then are we to make of recent mystery novels which have broken this rule – and gone on to phenomenal popularity.
The most obvious example of this is Gone Girl by Gillian Flynn, which is told by alternating narrators – a husband and his missing wife. If you haven’t read the book (and you really should, it’s terrific!) or seen the movie, all I can say is that both characters turn out to fail the likeability test pretty badly. I sure wouldn’t want to spend time with either of them. But they are fascinating – and that’s what keeps us turning the pages to find out what happens next.
The same is true for The Girl on the Train by Paula Hawkins, another huge-best seller in recent years. The narrator of this book is someone we feel sympathy for at the beginning, then not as much sympathy, and finally somewhere in between on the sympathy scale. But still not a fun person to be around. Not necessarily a good person. Not really a very likeable person
So does this mean the “likeability” rule doesn’t matter anymore?
Of course, some of this has been happening in fiction for awhile now. I mean how about Hannibal Lecter? Compelling character, but the whole cannibal thing is tough to get past as a character flaw. There’s a lot of this anti-hero stuff on TV too, with shows like Dexter and The Sopranos. Tony Soprano might seem like a nice guy some of the time, but we’ve watched enough to know that people around him wind up in waste dumps.
Some authors are happy to ignore the likeability issue, depending on the kind of book they are writing.
Charles Salzburg, the author of a new book called Second Story Man – about a brilliant cold-blooded burglar, talked recently about how he’d given up trying to make a dedicated criminal character like that likeable. He said he’d decided not to worry about it, and instead just make the burglar character as interesting as possible.
On the other hand, you can also have a character that’s too likeable. Reed Farrel Coleman, the best-selling author of the Jesse Stone series originated by Robert B. Parker, says writing Jesse can be a challenge because he’s almost too perfect. Good-looking. Tough. Honest. Charming (having Tom Selleck play the role on TV adds to this image.) Coleman said that was why it was important for Jesse Stone to have some faults – drinking too much, a failed marriage, a promising baseball career cut short by injury. But, when all is said and done, he’s still damned likeable.
For me, I’m still going to follow the rule too.
Yes, my character Clare Carlson shoots off her mouth at the wrong time a lot.
She can be super-annoying.
She doesn’t always tell the whole truth about things.
But you know what?
I like her.
Hopefully, the readers will too.

When eleven-year-old Lucy Devlin disappeared on her way to school more than a decade ago, it became one of the most famous missing child cases in history.

The story turned reporter Clare Carlson into a media superstar overnight. Clare broke exclusive after exclusive. She had unprecedented access to the Devlin family as she wrote about the heartbreaking search for their young daughter. She later won a Pulitzer Prize for her extraordinary coverage of the case.

Now Clare once again plunges back into this sensational story. With new evidence, new victims and new suspects – too many suspects. Everyone from members of a motorcycle gang to a prominent politician running for a US Senate seat seem to have secrets they’re hiding about what might have happened to Lucy Devlin. But Clare has her own secrets too. And, in order to untangle the truth about Lucy Devlin, she must finally confront her own tortuous past.

R.G. Belsky is an author of crime fiction and a journalist in New York City. Belsky’s crime novels reflect his extensive media background as a top editor at the New York Post, New York Daily News, Star magazine and NBC News. His previous novels include the award-winning Gil Malloy mystery series. Yesterday’s News is the first in a new series featuring Clare Carlson, the hard-driving and tenacious news director of an NYC TV station.

Catch Up With R.G. Belsky On:

This is a rafflecopter giveaway hosted by Partners in Crime Virtual Book Tours for R.G. Belsky. There will be 1 winner of one (1) Amazon.com Gift Card. The giveaway begins on June 1, 2018, and runs through July 1, 2018.