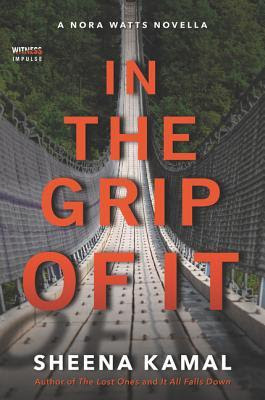 On a surveillance assignment for a child custody case, PI-in-training Nora Watts finds herself ensconced in a small farming community on a beautiful hippie island in the Pacific Northwest, a place with a reputation for being welcoming to outsiders. But when she arrives there, she discovers her welcome quickly wears thin. Perhaps too quickly.

Salt Spring Island, with a history as a refuge for African Americans fleeing the bonds of slavery, is not a place of refuge for her—and, she suspects, may not be for the people who live there, either.

As she investigates, nothing about this remote community seems to add up. It gets personal as Nora confronts her own complicated feelings toward her estranged daughter and becomes increasingly concerned about the child she’s been tasked to surveil. She discovers that small, idyllic communities can hide very big secrets.

After all of the drama featured in The Lost Ones (the first book in the Nora Watts series and a highly recommended read), Nora Watts is back. Now she’s pursuing her PI license and is off to a small island off of Vancouver for a custody case. As soon as Nora arrives on what is supposed to be an idyllic retreat from the outside world, she knows something is wrong. She can spot a liar in no time at all and she knows that Vikram Sharma is that and possibly more. This healthy, back-to-basics, yoga-loving, all-welcoming farm is anything but welcoming. After only one night there, Nora knows that the healthy part is just as much of a lie as everything else. Fortunately, she does get the opportunity to not only see but meet the child she’s sent there to observe. Unfortunately, she’s “forced” to leave the farm after one night. Can she actually fulfill the client’s contract without drawing too much attention to herself? Is her client’s child in danger?
In the Grip of It is a fast-paced read and whetted this reader’s thirst for more Nora Watts. I enjoyed the story, action, and characters. Yes, there are bad guys but these aren’t necessarily black-hat bad guys but more shades of gray bad guys (trust me, it makes sense when you read the story). Obviously, there’s a lot more going on in the story than a custody case and bad guys, but if I told you more you wouldn’t need to read the story. If you’ve read The Lost Ones (I sincerely hope you have as I strongly encouraged you to read it last year), then you’ll definitely want to read In The Grip of It before the next Nora Watts novel releases later this summer, All Falls Down. This is a must-read series by a must-read author.
Disclaimer: I received a free digital review copy of this book from the publisher via Edelweiss+, as well as a free print review copy. I was not paid, required, or otherwise obligated to write a positive review. The opinions I have expressed are my own. I am disclosing this in accordance with the Federal Trade Commission’s 16 CFR, Part 255: “Guides Concerning the Use of Endorsements and Testimonials in Advertising.”

SHEENA KAMAL holds an HBA in Political Science from the University of Toronto and was awarded a TD Canada Trust scholarship for community leadership and activism around the issue of homelessness. Her debut novel, The Lost Ones was inspired by this and by Kamal’s most recent work as a researcher into crime and investigative journalism for the film and television industry.

Visit these other great hosts on this tour for more great reviews and features!

This is a rafflecopter giveaway hosted by Partners in Crime Virtual Book Tours for Sheena Kamal and WitnessImpulse. There will be 10 winners of one (1) print copy of Sheena Kamal’s The Lost Ones. The giveaway begins on June 1, 2018, and runs through July 1, 2018.