Good day, my fellow readers. I hope you’re all ready to sit back and enjoy some good reads for 2019. I consider myself very fortunate because I get introduced to new-to-me books and authors all the time with the blog tour companies I’m blessed to work with throughout the year. I may not always get the opportunity to review the books, but I always add the books to my ever-growing TBR list and look forward to discovering something new. Today, I’m honored to introduce you all to one such book and author, In This Ground by Beth Castrodale. Ms. Castrodale has taken a few minutes out of her busy schedule to stop by and discuss the intriguing setting for her book, In This Ground, a cemetery. Ladies and gentlemen, I give you Beth Castrodale.

One of the most common questions I get about my novel In This Ground is, “Why did you set the novel in a cemetery?”
The short answer is that I’ve been fascinated with cemeteries since I was a kid, when a friend and I would wander a local graveyard, read the names on the tombstones out loud, and make up stories about the lives we imagined these people to have led. The notion that cemeteries contain a multitude of stories lingered at the back of my mind for a long time, and a few years ago, it sparked the idea for In This Ground, which brings together the tales of people who are buried in a particular cemetery or who have some other business there.
As the novel took shape, I came to understand that its setting (the fictional Bolster Hill Cemetery) would need to be more than a static background for the story. Instead, it would have to do what the settings in some of my favorite novels do: help drive the plot and, ideally, become a sort of character in its own right.
It took me several drafts to figure out how to make the most compelling connections between the cemetery setting and the narrative arc of the novel. Looking back, I can identify a few major ways in which the setting fuels conflict and action:
The cemetery constantly reminds the protagonist of unresolved guilt from his past. For years, Ben Dirjery, a former rock guitarist who is now the gravedigger-in-chief at the cemetery, has believed that he bears at least some responsibility for the death of his former band’s lead singer, Vince Resklar, who is buried, literally, under Ben’s feet.
The fact that devotees of the band have made Vince’s grave a kind of shrine further aggravates Ben’s guilt and constantly reminds him of everything he left behind when he dropped out of the band–just as it was about to make it big. (Ben quit the band after learning that his girlfriend was pregnant, trading the rock-and-roll lifestyle in for fatherhood and the stability of a job at the cemetery.)
Vince’s grave becomes a night-time assembly spot for aspiring musicians, including Ben’s daughter, whom Ben has kept in the dark about his history with the band, and with Vince. Eventually, after uncovering clues about Ben’s past, she forces him to confront his guilt over Vince’s death.
The cemetery becomes the center of a community conflict. The conflict concerns a court order to move the gravesite of a legendary local figure–a nineteenth-century vagabond known as the Unknown Vagrant–from just outside the cemetery gates to within them. The move is deemed necessary because the grave is dangerously close to an ever-busier roadway, which has caused certain visitors to the gravesite to be injured or killed.
The move is controversial because the local historical society wants to use the exhumation as an occasion to analyze the DNA of the Unknown Vagrant and, in this way, learn more about him. However, many people see this as a violation of the rights and dignity of the Unknown Vagrant, who was notoriously private. This objection has protesters rallying at the cemetery’s gates.
Ben is in an uncomfortable position because while he’s slated to be part of the exhumation crew, he too has reservations about violating the privacy of the Unknown Vagrant. The whole situation tests his beliefs about what it means to be doing his best by both the living and the dead: what he sees as his most important mission at the cemetery.
The cemetery attracts a variety of characters whose agendas help advance the story. As I’ve mentioned, Vince Resklar’s grave attracts night-time visitors (mainly, musicians, including Ben’s daughter) who stir up uncomfortable feelings in Ben and ultimately force him to confront his past. Also, the protests at the site of the Unknown Vagrants’ grave eventually prompt Ben to consider ways in which the exhumation of this historical figure might be avoided.
The cemetery also becomes a target of yarn bombers, whose “temporary form of public art” fuels reflection and debate on the best means to honor the dead aesthetically. Additionally, the grounds attract mushroom foragers. Over many years of mushroom hunting at the cemetery, one of these foragers, Dolores Fielding, becomes a kind of mentor to Ben. And like him, Dolores advocates for ways to make the grounds more environmentally sustainable.
Eventually, Ben learns that Dolores is dying and that she would like to have a green burial at the cemetery, a practice that Ben has pushed for but that the cemetery’s board has resisted approving. (A green burial aims to commit a body to the earth in the least environmentally intrusive way possible. Bodies aren’t embalmed or enclosed in heavy caskets or concrete vaults, though they might be contained in a shroud or biodegradable casket.) Out of a desire to honor Dolores’s wishes, Ben tries unconventional methods for making green burials a reality at the cemetery.
While writing In This Ground, I understood that certain perceptions and assumptions about cemeteries would be working against me: for one thing, the idea that they are mournful landscapes concerned only with honoring the dead. Although cemeteries do fulfill that purpose, they are also settings for a good deal of drama, as I learned in the process of researching the novel. I hope that I made the fictional cemetery at the heart of In This Ground not only a worthy stage for the dramas that unfold there but also a central element of the novel, one that is compelling in its own right. 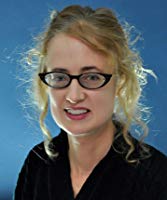 Beth Castrodale has worked as a newspaper reporter and editor. Her novels include Marion Hatley, a finalist for a Nilsen Prize for a First Novel from Southeast Missouri State University Press (published by Garland Press in 2017), and In This Ground (Garland Press, 2018). Beth’s stories have appeared in such journals as Printer’s Devil Review, The Writing Disorder, and the Mulberry Fork Review. Get a free copy of her novel Gold River when you sign up for her e-newsletter, at http://www.bethcastrodale.com/gold-river/.

Just as his indie-rock band was poised to make it big, Ben Dirjery traded it all in for fatherhood and the stability of a job at Bolster Hill Cemetery. Now closing in on fifty, the former guitarist finds himself divorced and at loose ends, and still haunted by the tragic death of his former band’s lead singer, who is buried, literally, under Ben’s feet. Then Ben’s daughter begins questioning a past he has tried to bury. If he can face her questions, he might finally put to rest his guilt over his bandmate’s death, and bring music back into his life.

“Startlingly incongruous parts–graveyards, guitars, and mushrooms–come together in satisfying and unexpected ways. Sharp writing and an unconventional plot make for a darkly enjoyable read.”–Kirkus Reviews

3 thoughts on “Guest Post: Beth Castrodale – IN THIS GROUND”