Good day, my bookish peeps. I’m pleased to host a visit from S.C. Perkins, author of the debut cozy, Murder Once Removed, an Ancestor Detective Mystery. Sit back, relax, and get ready for a little visual road trip, because Ms. Perkins is going to take us all on our whirlwind tour of Austin, Texas. After this quick trip, you’ll probably be ready for some Tex-Mex cuisine and I can suggest the perfect book to read while you’re eating…Murder Once Removed. Okay, you can read the book before, during, and/or after eating.

Deep in the Heart of (Austin) Texas

Hi! I’m S.C. Perkins and I’m thrilled to be on The Book Diva’s Reads for a guest post! Today, I thought I’d show y’all a little bit of Austin, Texas, which is the setting of my debut cozy mystery, Murder Once Removed.
So, why did I put my main character, genealogist Lucy Lancaster, in Austin? Well, it’s a unique and cool city with a singularly small-town vibe. There’s very little of Austin that feels “big city,” even though its population is edging toward a million people. It’s all at once a storied college town, a hotbed of music and musicians, a family-friendly place to raise children, and the center of Texas politics.
Oh, and if you want great food of all kinds, Austin has it. Especially in the tacos department, which is a huge plus for Lucy, who is a bit of an addict. Okay, a lot of an addict… Anyway, she also loves Austin for its abundance of genealogical and history-related resources. When it comes to Texas settings, there’s no place more perfect for Lucy, or more fun for me to set her adventures.
And now, I’m happy to present visuals of some of the places Lucy goes in Murder Once Removed, both on her regular days as a professional genealogist and where her first investigation takes her.

1. The Lorenzo De Zavala State Archives and Library Building. The Archives, as it is most often called, is a National Literary Landmark and is home to, amongst other resources, extensive genealogy and family history assets. Lucy frequents the Archives, especially when there’s records she can only view on microfilm.

2. The Capitol. Austin is the capital city of Texas, and the capitol building is located right in downtown. The Italian Renaissance Revival-style building was completed in 1888 and is made of the same Sunset Red granite as the next-door Archives building. A statue of the Goddess of Liberty stands watch at the top. It’s also home to the Legislative Reference Library, where Lucy goes to do research on her client’s politically-minded ancestors. 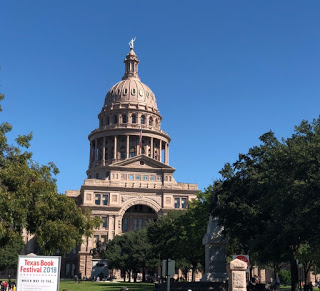 The Legislative Reference Library – Copyright, the Texas State Preservation Board

3. The Capitol Rotunda:  the floor. One of many mosaic floors in the building, the Rotunda’s floor showcases the seals of the six flags that have flown over Texas:  Spain, France, Mexico, the Republic of Texas, the Confederate States of America, and the United States of America.

4. The Capitol Rotunda: the ceiling. The star in the middle represents the lone star of Texas against a blue sky. In the valley between each point is a letter, spelling TEXAS. Though the rotunda ceiling makes an appearance in Lucy’s adventure, I’m really just showing it to you because I think it’s so pretty. 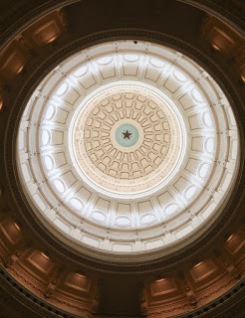 5. The University of Texas at Austin campus. Though I myself went to Texas A&M University, the longtime rival of UT, many members of my family have gone here. So, I made Lucy a graduate of both great universities.

In Murder Once Removed, I’ve imagined a building for historical research called the Hamilton American History Center. It’s loosely based on UT’s Dolph Briscoe Center for American History. I also have Lucy visiting Waggener Hall, which is a real Liberal Arts building on campus. Both my imagined Hamilton Center and the real Waggener Hall are on the southeast side of campus, to the left side of the famous UT tower in this photo.

6. The Frost Bank Tower. One of the most iconic buildings in downtown Austin. In Murder Once Removed, Lucy goes to the Frost Bank Tower to attempt to interview someone with a direct connection to both the past and the present murders.

When seen from one side, the building is said to look like an owl. Do you see it? Seen from another angle, one cheeky reporter also claimed it looks like a large set of nose-hair clippers. Both descriptions make me laugh!

Photo courtesy of Pinterest. No copyright found; no infringement intended.

7. Lucy’s Office Building. Though I’ve created a historic building called The Old Printing Office, in which Lucy and her two other self-employed best friends, Serena and Josephine, work, I based the idea on this lovely building I’ve seen many times. It’s located exactly where I have The Old Printing Office located, on Congress Avenue, just a block away from the entrance to the capitol grounds.

This building was built in 1874, as you can see at the top arch, and has a little balcony that is almost hidden by trees. In my mind, Lucy, Josephine, and Serena occasionally have cocktails out on their similar balcony (sans trees) and watch the bustle of downtown Austin go by.

8. Congress Avenue Bridge, and its bats. Over one 1.5 million Mexican Free-Tailed Bats roost under Austin’s Congress Avenue Bridge during the warm months of the year, which, in Austin, can go into early November. Each night at sunset, the bats fly out from under the bridge in a spectacle every bit as cool as Austin itself. Lucy drives over this bridge every day to and from work.

9. Big Flaco’s Tacos. Lucy’s favorite taqueria is another creation of my imagination, which is unfortunate because I love tacos just as much as Lucy.

If you took this 1950s-style diner interior and put it through a hail storm, that’s about what I imagine Flaco’s taqueria looks like. Flaco’s place had been vandalized before he purchased it, but he liked the beat-up look so much that he kept it. No doubt Flaco’s tacos would be every bit as scrumptious looking as the photo below.

Image found on internet. No copyright found; no infringement intended.

Image found on Pinterest. No copyright found; no infringement intended.
Thank you so much for joining me on a little tour of Lucy’s world in Austin!

S.C. Perkins’ Murder Once Removed is the captivating first mystery in the Ancestry Detective series, in which Texas genealogist Lucy Lancaster uses her skills to solve murders in both the past and present.
Except for a good taco, genealogist Lucy Lancaster loves nothing more than tracking down her clients’ long-dead ancestors, and her job has never been so exciting as when she discovers a daguerreotype photograph and a journal proving Austin, Texas, billionaire Gus Halloran’s great-great-grandfather was murdered back in 1849. What’s more, Lucy is able to tell Gus who was responsible for his ancestor’s death.
Partly, at least. Using clues from the journal, Lucy narrows the suspects down to two nineteenth-century Texans, one of whom is the ancestor of present-day U.S. senator Daniel Applewhite. But when Gus publicly outs the senator as the descendant of a murderer—with the accidental help of Lucy herself—and her former co-worker is murdered protecting the daguerreotype, Lucy will find that shaking the branches of some family trees proves them to be more twisted and dangerous than she ever thought possible. 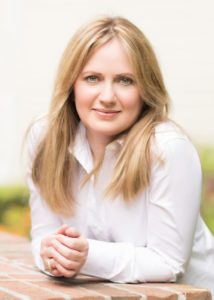 S.C. Perkins is a fifth-generation Texan who grew up hearing fascinating stories of her ancestry and eating lots of great Tex-Mex, both of which inspired the plot of her debut mystery novel. Murder Once Removed was the winner of the 2017 Malice Domestic Best First Traditional Mystery competition. She resides in Houston and, when she’s not writing or working at her day job, she’s likely outside in the sun, on the beach, or riding horses.

Enter to win one (1) print copy of Murder Once Removed by S.C. Perkins in this tour-wide giveaway. Use the Rafflecopter form below.