A thrillingly suspenseful debut novel, and a fierce howl of rage that questions the true meaning of justice.

Rafael Zhettah relishes the simplicity and freedom of his life. He is the owner and head chef of a promising Houston restaurant. A pilot with open access to the boundless Texas horizon. A bachelor, content with having few personal or material attachments that ground him. Then, lightning strikes. When he finds Tieresse—billionaire, philanthropist, sophisticate, bombshell—sitting at one of his tables, he also finds his soul mate and his life starts again. And just as fast, when she is brutally murdered in their home, when he is convicted of the crime, when he is sentenced to die, it is all ripped away. But for Rafael Zhettah, death row is not the end. It is only the beginning. Now, with his recaptured freedom, he will stop at nothing to deliver justice to those who stole everything from him.

This is a heart-stoppingly suspenseful, devastating, page-turning debut novel. A thriller with a relentless grip that wants you to read it in one sitting. David R. Dow has dedicated his life to the fight against capital punishment—to righting the horrific injustices of the death penalty regime in Texas. He delivers the perfect modern parable for exploring our complex, uneasy relationships with punishment and reparation in a terribly unjust world.

Rafael Zhettah was a successful restauranteur. He wasn’t a millionaire, but he was well-off financially speaking and his restaurant was booming. He was loved and respected by his staff. Although without any close family ties in the States, he wasn’t really wanting for anything or so he thought until Tieresse walks into his restaurant. Their relationship began with Tieresse complementing the food and progressed from there. In less than a year, 37-year-old Rafael was married to the 51-year-old billionaire socialite. Their marriage was unconventional by most standards, but they were definitely devoted to one another and head-over-heels in love. And then the unspeakable happens, Tieresse is murdered. Rafael has an alibi, but his unconventional marriage is misunderstood by most, and he is considered the prime suspect. Rafael is an innocent man and trusts the judicial system until he is found guilty of a crime that he did not commit. Adding insult to injury, he is given the death penalty. Rafael then spends over five years on death row then new evidence is uncovered that could potentially exonerate him. Surely, the Supreme Court of Texas will provide a stay of execution and allow the evidence to be tested? Thankfully, the federal courts did provide a last-minute stay of execution and Rafael is completely exonerated and released from prison. Rafael has lost the love of his life, his business, his good name, and over six years of his life. He doesn’t blame his lawyers or even the jurors from his original trial for his legal debacle. He’s incredibly grateful to his legal team for all of their hard work. He does, however, harbor growing animosity toward the two judges on the Texas Supreme Court that thwarted his legal team at every turn. Can he let go of this animosity and live his life in peace or is it time to teach these judges a lesson? How far is too far when exacting revenge?
Confessions of an Innocent Man is the first fiction book written by David R. Dow and it packs quite a punch. The author provides an interesting glimpse into the troubled legal system where a suspect is often considered guilty with little presumption of innocence rather than innocent until proven guilty. This legal thriller shines a light on the miscarriages of justice that are often perpetrated against people of color within the judicial system. This book isn’t a diatribe against the legal system. It does highlight the faults within the system, but it also highlights the things that work. Confessions of an Innocent Man is more than a story about an innocent man being railroaded on a murder charge, it’s about unconventional relationships, vengeance, reparations, and more. Yes, there’s a lot going on in this story. The reader gets a fascinating glimpse into the life of people on death row, the legal system (at least the Texas legal system) from arrest through trial and after, the emotional toll of being on death row and how inmates there are treated, the struggle to adjust after exoneration and release, in addition to witnessing the growing relationship between Tieresse and Rafael, and more. This book deals with some difficult subjects: murder, death row, abuse of prisoners, etc., but it was a compelling read. I couldn’t put the book down until I got to the end and thoroughly enjoyed it even with the dark themes. If you enjoy reading realistic fiction or legal thrillers, then I urge you to get a copy of Confessions of an Innocent Man to read. This book is one of my #mustread recommendations for the year. I look forward to reading more fiction by Mr. Dow in the future.

Disclaimer:  I received a free digital copy of this book from the author/publisher via Edelweiss+ for review purposes. I was not paid, required, or otherwise obligated to write a positive review. The opinions I have expressed are my own. I am disclosing this in accordance with the Federal Trade Commission’s 16 CFR, Part 255: “Guides Concerning the Use of Endorsements and Testimonials in Advertising.” 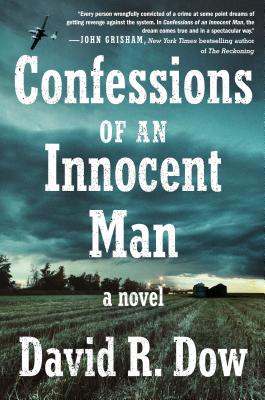