Doctor Rowan Dupont knows death. She grew up surrounded by it in her family’s Victorian funeral home, and it’s haunted her since the day her twin sister drowned years ago. Between her mother’s subsequent suicide and the recent murder of her father, coming home to run the funeral home feels fitting—even if it leaves her vulnerable to an obsessive serial killer.

Rowan refuses to let fear keep her from honoring her family. But the more time she spends back in Winchester, Tennessee, the more she finds herself questioning what really happened that fateful summer. Had her sister’s death truly been an accident? And what pushed their mother to take her own life? The dark lake surrounding Rowan’s hometown holds as many secrets as the bodies that float in its chilling depths. But Rowan is running out of time if she’s going to uncover the truth before somebody sinks her for good.

Dr. Rowan DuPont is a forensic psychiatrist. She was once well respected by law enforcement and thought her career was beneficial. After her father was murdered by her longtime mentor she is questioning all that she’s ever known. She leaves Nashville behind and returns to her hometown of Winchester, Tennesse and takes over the family mortuary business. Rowan’s life has been filled with heartbreak, beginning with the drowning death of her twin sister when she was twelve. This was followed only a few months later by her mother’s suicide. Rowan even attempted suicide a couple of times during her youth, but the only ones that know that secret are her father, her mentor and former psychiatrist, Dr. Julian Addington, and her childhood friend, Billy Brannigan, who’s now chief of police in Winchester. During one of Rowan’s waterfront walks near the place of her sister’s drowning, she discovers bones of a teenaged girl. The bones are eventually linked to a missing teenager from California, Dr. Julian Addington, and Rowan’s deceased twin sister Raven. Adding to the drama of Rowan’s return is her discovery that one of the bodies in the mortuary may not have died of a fall as initially expected. This sleepy small town is now dealing with murder after murder and all are linked to Dr. Julian Addington and his quest to torment Rowan. Can Rowan and Billy uncover all the secrets her family tried to keep hidden all those years ago before it’s too late?
The Secrets We Bury by Debra Webb is the first installment in the Undertaker’s Daughter series and it starts off with a bang, figuratively speaking. Rowan is dealing with the psychological torment of someone that knows all of her secrets and even worse, he knows many of the secrets kept by her parents that she was completely unaware of until now. Rowan feels as if she’s unraveling as she tries to figure out what happened in the past along with what’s currently happening. Yes, there’s a lot going on in this story and there’s no way I can tell you everything without massive spoilers. If you’re into suspense thrillers or psychological suspense reads, then you’ll definitely want to grab a copy of The Secrets We Bury. If you’ve read anything by Debra Webb in the past, then you’re familiar with her writings and you’ve probably already got this book on your TBR list and a copy on pre-order. If you haven’t read anything by this author in the past, then I suggest you grab a copy of The Secrets We Bury and then you can enjoy reading her backlist while you wait for the next installment in this series. I enjoyed The Secrets We Bury and can’t wait to read the next book to see what happens next with Rowan and Billy. 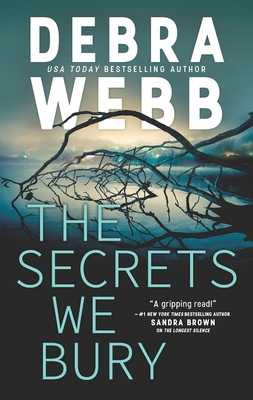