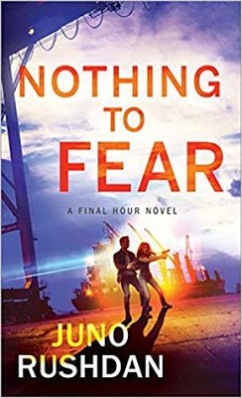 The clock is ticking

Fearsome Gray Box operative Gideon Stone is devoted to his work and his team. He’s never given reason to doubt his loyalty…until he’s tasked with investigating Willow Harper, a beguiling cryptologist suspected of selling deadly bio-agents on the black market.

Thrust into the crossfire of an insidious international conspiracy, Gideon will do anything to keep Willow safe…even if that means waging war against his own. With time running out, an unlikely bond pushes limits―and forges loyalties. Every move they make counts. And the real traitor is always watching…

We were introduced to the Black Ops group, Gray Box in book one of the Final Hour series, Every Last Breath by Juno Rushdan. This group is comprised of super intelligent, highly skilled, and well trained analysts and operatives. Willow Harper became somewhat suspicious in the last Gray Box mission when she took a break and missed tagging the bad guy at a crucial moment. It didn’t seem to matter to some people that she had been working for over 20 hours, hadn’t had any sleep, and had only taken a mandated 15 minute break, it was still suspicious. Adding insult to injury, when the suspect was apprehended and brought into custody, Willow’s pin code was used in an effort to murder the suspect. Now a million dollars has been found in an off-shore account in her name and it doesn’t seem to matter that she was almost killed in a recent car accident. A car accident caused by tampering. Fortunately, one of the Gray Box operatives, Gideon “Reaper” Stone, knows beyond a shadow of a doubt that Willow is innocent and is willing to do whatever it takes to protect her. One key question is will it be enough considering there is a traitor hidden deep at Gray Box? An even bigger question is can he trust his emotions with Willow in this dangerous situation?
Nothing to Fear is the second book in the Final Hour series by Juno Rushdan. This is a fast-paced and engaging thriller that incorporates international intrigue, kidnapping, espionage, murder, romance, and more. I enjoyed the main characters primarily because Willow isn’t your average female lead character. Yes, she’s smart, intelligent, and pretty, but she’s also on the spectrum and used to a highly regimented life. I did have difficulties accepting how well she adjusted to having this regimented life disrupted given the fact she talked (and thought) about needing to adhere to a schedule, etc. It seemed as if she was on the spectrum for a few pages and then all of sudden she wasn’t, but that’s just my perspective. Gideon initially comes across as the super-strong alpha male, and although he is definitely an alpha-male, he also has his fair share of issues he’s dealing with in terms of his first marriage and the death of his first wife. There’s a lot of action crammed into Nothing to Fear and if you’ve read Every Last Breath, I strongly encourage you to grab a copy to read as soon as it releases (even with the issues I had with Willow being on-and-off the autism spectrum). For those of you that haven’t read Every Last Breath, if you enjoy reading romantic-suspense, then I encourage you to grab a copy and read that first so you’ll understand the story arc, then get yourself a copy of Nothing to Fear. Yes, I had some issues with some facets of this story, but I still found it to be an enjoyable read. How enjoyable? I had a moderately-severe migraine and the story kept me turning the pages! I look forward to reading the next installment in this series.
Disclaimer: I received a free digital review copy of this book from the publisher via Edelweiss+. I was not paid, required, or otherwise obligated to write a positive review. The opinions I have expressed are my own. I am disclosing this in accordance with the Federal Trade Commission’s 16 CFR, Part 255: “Guides Concerning the Use of Endorsements and Testimonials in Advertising.”