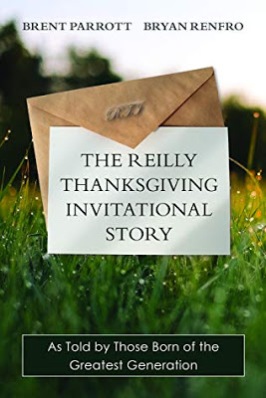 In 1960, on the front lawn of an elementary school in North East Dallas, a tradition was born. A group of seventh-grade boys captured the free time before Thanksgiving dinner to engage in a game of touch football. It was a good day to play. So good, in fact, that the game would resume each year at the same time in the same place.

Through the ebb and flow of lives, loves, and responsibilities, the Reilly Thanksgiving Invitational (RTI) continued for five decades. With my good friend Bryan Renfro, we have collaborated to memorialize and reminisce about our lives, the times, the game, and the traditions. The story is chronicled through text, photos, videos, and links; over 200 links 200 photos and 42 invitations.

The Reilly Thanksgiving Invitational Story offers a first-hand glimpse into an era long past and captures the essence of tradition, friendship, life lessons, history, culture, the ups and downs, happiness, and sadness for those lost, over decades.  Today, Alzheimer’s has touched most of the 22 members and a portion of the book proceeds will be donated to Alzheimer’s research.


More about this book

For more than a half-century, a group of friends from Texas assembled to play touch football each Thanksgiving Day morning on the front lawn of their old elementary school. As the men aged, their determination and love of the game stayed strong. After the final game in 2009, reporter John  Anders noted:

“They arrived on walkers and in iron lungs…Grandchildren would drop them off and perhaps stay behind to serve as stretcher-bearers following the conflict.”

Team leaders Brent Parrott and Bryan Renfro collaborated to memorialize and reminisce about this incredible 50-year tradition, their lives, the times, and the game, in the book The Reilly Thanksgiving Invitational Story.

“(This Book) captures the era of growing up in the 50s and 60s with sensitivity and humor. Baby Boomers are a distinct group who experienced a large variety of social, political, and historical events and changes. We all can identify with the angst and joys of our teenage years…I recommend this fun coming-of-age read to anyone.” — Neilia West (Reviewer)

BRENT PARROTT is a writer, former technology executive, and teacher, and currently serves as Board Chairman for the charter schools of Pioneer Technology & Arts Academy. With his life-long friend, Bryan Renfro, he is the co-author of The Reilly Thanksgiving Invitational Story, a memoir about a group of friends who kept an annual touch football game going for 50 straight years.
He is also the author of two new books scheduled for publication in 2020, Jackpot: The Summer of ’69 and What Would You Do? What Would You Not Do? Brent and his wife Robyn (that’s right, two bird names) spend as much time as possible with their daughter Brynn, son-in-law Jacob, and two amazing grandsons. He has always lived, worked, and played in Dallas, Texas.
BRYAN RENFRO graduated in 1970 from the University of Texas at Arlington and was drafted into the Army the following year during the Viet Nam war. He was the editor and sports writer for Sound Off, the base’s newspaper in Fort Meade, Maryland. His work life followed an untraditional path for the times as he experienced a mix of endeavors through the years, including the furniture importing business.
For five decades, he served as the organizer and “Commissioner” of an annual Thanksgiving touch football game in Dallas, Texas. Known locally as the Turkey Bowl, Bryan chronicled his experiences in the book, The Reilly Thanksgiving Invitational Story, with co-author Brent Parrott. The 400-page memoir was published for the game’s 60th anniversary in 2019. Today, Bryan lives in Dallas with his wife LaDonna and enjoys bible study, photography, his woodshop, and nurturing long-time friendships.

This spotlight brought to you by Farrow Communications

One thought on “Book Spotlight: THE REILLY THANKSGIVING INVITATIONAL STORY by Brent Parrott and Bryan Renfro”