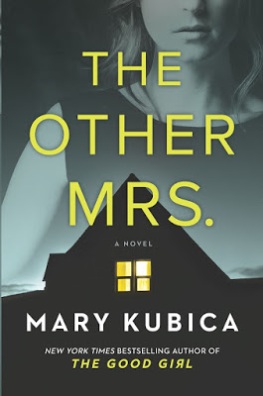 Propulsive and addictive, The Other Mrs. is the twisty new psychological thriller from Mary Kubica, the New York Times bestselling author of The Good Girl

She tried to run, but she can’t escape the other Mrs.

Sadie and Will Foust have only just moved their family from bustling Chicago to small-town Maine when their neighbor Morgan Baines is found dead in her home. The murder rocks their tiny coastal island, but no one is more shaken than Sadie.

But it’s not just Morgan’s death that has Sadie on edge. And as the eyes of suspicion turn toward the new family in town, Sadie is drawn deeper into the mystery of what really happened that dark and deadly night. But Sadie must be careful, for the more she discovers about Mrs. Baines, the more she begins to realize just how much she has to lose if the truth ever comes to light.

Will and Dr. Sadie Fount have relocated their family from Chicago, Illinois to a small coastal island in Maine. Ostensibly the reason for this relocation is Will’s sister’s death by suicide and their guardianship over Will’s 16-year-old niece Imogen. Reality is a bit more nuanced than that. Their eldest son Otto was being bullied at school and facing expulsion for bringing a knife to school. Sadie dealt with a death from a routine procedure at her job as an emergency room physician, suffered a bit of a breakdown, and subsequently resigned rather than deal with seeing a therapist. The only two members of the family that apparently had no issues in Chicago and are having no difficulties adjusting to life in Maine are Will and 7-year-old Tate. The move has been difficult for 14-year-old Otto and Will’s niece doesn’t seem to want anyone around, much less her uncle and his family. Sadie is trying to adapt to being a small-town physician, her marriage is a bit shaky, and she’s experiencing some lost time. She initially writes this off as being due to the change from city to more rural life, the bustle of the small-town medical practice versus the well-staffed metropolitan emergency room, and just living in a somewhat gloomy house where someone died by suicide. Things aren’t great in Maine, but they are progressing until one of the Founts’ neighbors is found murdered, discovered by the woman’s 6-year-old stepdaughter while the child’s father is traveling out of the country on business. Based on a neighbor’s report of an argument between Sadie and the murdered woman, the police zero in on Sadie as a person-of-interest and she didn’t even know the woman that was killed? As the island police investigate the murder, Sadie begins to question everything and everyone around her. Why has Imogen said things to Sadie that she then denies to Will? Why does Imogen keep her room padlocked? Why has Otto become so hostile and aloof? And why do people keep saying they’ve seen Sadie doing or saying things that she’d never do or say in places she’s never been? Is someone trying to frame her for murder? If so, what’s the motive? Can Sadie uncover the truth before she becomes the next victim?
I’ve had the pleasure of reading all of the previous books by Mary Kubica so I knew I had to read The Other Mrs. when offered the chance and am I so glad I accepted that offer! The Other Mrs. was a dark and twisted read and I mean that in the best possible way. Just when I thought I knew where the story was going, the author threw a nice twist into play and I was left guessing again. This story is told in alternating perspectives of three characters, Sadie Fount, who we know is married to Will, a practicing physician, and mother of two boys. The other two voices we know very little about other than what they reveal. Camille is apparently someone that Will met before Sadie and someone he’s continued to have an affair with throughout his marriage to Sadie. Camille is the jealous stalker type and comes across as one scary lady. The third voice is that of Mouse a 6-year-old girl. All we know about Mouse is that she lives with her father until he brings home a new wife. Mouse’s stepmother is physically, mentally, and emotionally abusive but commits all of the abuse when the father is traveling for work. There is a lot to parse and unpack with The Other Mrs. and I can’t tell you too much because then you’ll know what’s happening, who did it, and why. What I will say is that this is an amazing read that deals with a host of issues including suicide, murder, bullying, gaslighting, and mental health issues. I can also tell you to expect the unexpected and prepare for one heck of a read with The Other Mrs. For those of you that love psychological suspense/psychological thrillers, The Other Mrs. may just be the perfect book for you. For those of you that have read other books by Mary Kubica in the past, I probably don’t have to tell you to grab a copy of this book because it’s probably already on your TBR list, but just in case you haven’t already decided to read this one, put it on your list. Actually, put it on the top of your TBR list because you’ll want to read this one as soon as possible. I enjoyed reading The Other Mrs. and look forward to rereading again in the future just to make sure I didn’t miss anything the first time around.
Happy Reading y’all!