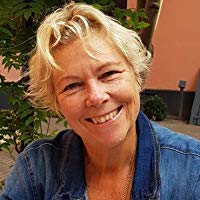 2 thoughts on “Guest Post: Anna Belfrage – A FLAME THROUGH ETERNITY”