We made it to another Friday, my bookish divas and divos. YAY! I’ve always wanted to travel the world and realized at a young age that I could do just that through reading. Although my actual travels have been somewhat limited, today’s guest travels extensively IRL and virtually in her Travel Can Be Murder Cozy Mysteries, including the latest Death by Windmill, Jennifer S. Alderson. Ms. Alderson will be giving us a “behind-the-scenes” look into the development of her travel series as well as providing us with a glimpse into Death by Windmill. Divas and divos, I turn the blog over to Ms. Jennifer Alderson.

My Agatha Christie Challenge and the Travel Can Be Murder Cozy Mysteries by Jennifer S. Alderson

“Agatha Christie said that most murders were committed for one of four reasons: jealousy, greed, a desire for power, and revenge.” –  excerpt from Death on the Danube
When I began writing the Travel Can Be Murder cozy mystery series, I decided to use Agatha Christie’s four reasons for committing murder as the motives my killers would use to justify their actions.
Like many mystery authors, Agatha Christie was an early favorite of mine. My mother had all of her books and, after I had worked my way through the Hardy Boys and Nancy Drew, I read all of them!
When I was writing book one of my new travel cozy series, Death on the Danube, mentioning Christie’s theory about murder fit naturally into a scene at the spa. And in book two, comparisons between Christie’s poisonous plants garden in Torquay and the one my tourists were visiting in Paris, were also easy to make.
Though I am by no means trying to emulate her style in this series, I thought it would be a fun challenge to work a reference to Agatha Christie into each of my own mysteries.
However, when I began writing this book set in Amsterdam, I wasn’t able to find a clear link between Christie and the Netherlands and feared that was the end of my experiment. Until I discovered a local establishment, the Pulitzer’s Bar, creates a special themed-cocktail menu each year – and in 2020 the twelve drinks are based on characters in Christie’s Murder on the Orient Express. Problem solved!
Death by Bagpipes, book four in the Travel Can Be Murder series is set in Edinburgh. From my preliminary research, I won’t have much trouble finding a way to mention Agatha in this one!
In this short excerpt from Death by Windmill, Lana and her tour group are visiting Pulitzer’s Bar:

Lana had not been looking forward to the tour of the Rijksmuseum this morning, but it ended up being the perfect distraction from her current troubles. However, by the time they were finished with the drawing lesson, dark thoughts had taken over again, leaving her feeling restless and distracted.

She followed her group in a daze as they traversed the cobblestoned streets of Amsterdam. Bikes, pedestrians, delivery trucks, and cars all fought for space on the narrow strips of road running parallel to the many canals crisscrossing the city. After almost getting run over by an angry bicyclist, Lana pushed her thoughts aside and focused on getting herself and her group to Pulitzer’s Bar in one piece.

Randy led them to the upscale bar on the Keizersgracht. The elegant space was divided into several small rooms, almost like a home, and each was decorated as if the owner had just stepped out. The art deco furnishings and fixtures made it a timeless and relaxing space.

Her group settled around several small tables in what could have once been the living room. Luckily most were getting along well enough that all she and Randy had to do was take their orders, then sit back and relax. Lana was grateful; her mind was racing through her list of suspects on an unending loop that she couldn’t switch off.

She chuckled when she saw the bar’s cocktail menu was inspired by characters in Agatha Christie’s Murder on the Orient Express. Each of the twelve suspects in her mystery had a drink dedicated to them. Lana waffled between “The Gangster” or “The Conductor,” ultimately settling for “The Maid” when she noticed lemon sherbet was one of the ingredients.

The drink list made Lana think of her own group—the cleaner, retiree, personal assistant, social influencer, writer, and advertising executive. What would her suspects’ drinks be made of?

Death by Windmill: A Mother’s Day Murder in Amsterdam

About Death by Windmill 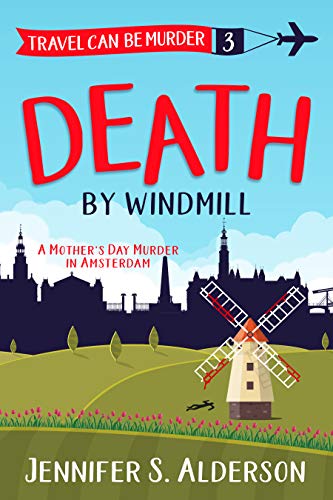 Death by Windmill: A Mother’s Day Murder in Amsterdam
(Travel Can Be Murder Cozy Mystery Series)

A Mother’s Day trip to the Netherlands turns deadly when a guest plummets from a windmill. Was it an accident or a murder? For Lana Hansen, the answer will mean freedom or imprisonment for someone close to her…

Wanderlust Tours guide Lana Hansen and her mother, Gillian, haven’t seen eye to eye in over a decade, ever since Lana was wrongly fired from her job as an investigative reporter. So when Lana’s boss invites Gillian to join her upcoming Mother’s Day tour to the Netherlands, Lana is less than pleased.

What could be worse than spending ten days with her estranged mother? Lana is about to find out…

The tour begins on a high note when the majority of guests bond during their visit to the Keukenhof flower gardens and a cruise around the picturesque canals of Amsterdam.

Despite her initial reservations, Lana thinks this might be the best group she had ever led. Until she discovers one of her guests—a recent retiree named Priscilla—is the person who destroyed her career in journalism.

All Lana can see is red. But circumstances dictate that she figure out a way to lead the tour, make peace with her mother, and not murder her guest. She doesn’t know whether she can handle the pressure.

Lana needn’t worry. Shortly after their fight, Priscilla falls off the balcony of a historic windmill at Zaanse Schans. Was she pushed or simply careless? The investigating officers suspect murder—and topping their suspect list is Lana’s mom!

Can Lana save Gillian? Or will her mother end up spending the rest of her days in a Dutch prison?

Jennifer S. Alderson was born in San Francisco, raised in Seattle, and currently lives in Amsterdam. After traveling extensively around Asia, Oceania, and Central America, she moved to Darwin, Australia, before settling in the Netherlands. Her background in journalism, multimedia development, and art history enriches her novels. When not writing, she can be found in a museum, biking around Amsterdam, or enjoying a coffee along the canal while planning her next research trip.
Jennifer’s love of travel, art, and culture inspires her award-winning mystery series—the Zelda Richardson Mysteries and Travel Can Be Murder Cozy Mysteries—and standalone stories.