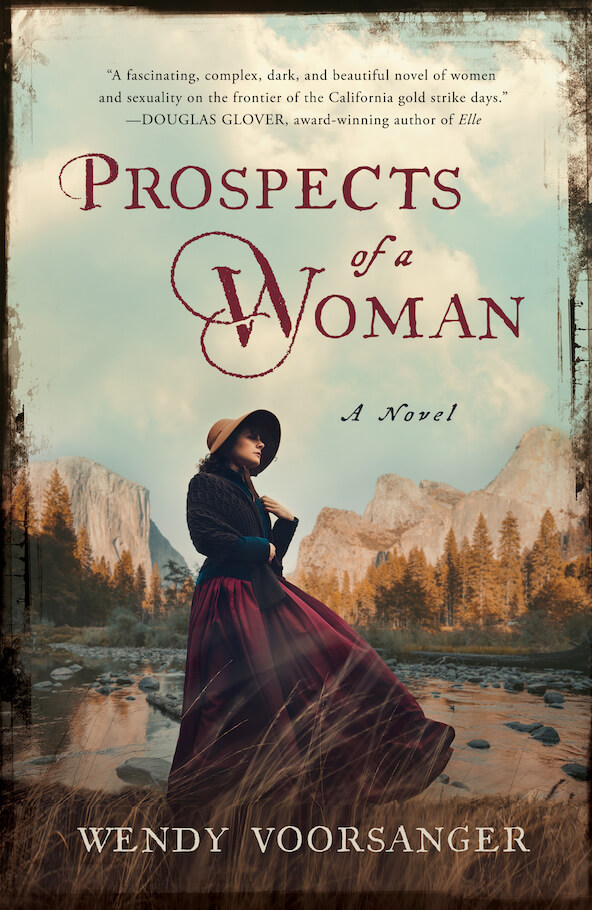 Prospects of a Woman

Elisabeth Parker comes to California from Massachusetts in 1849 with her new husband, Nate, to reunite with her father, who’s struck gold on the American River. She soon realizes her husband is not the man she thought—and neither is her father, who abandons them shortly after they arrive. As Nate struggles with his sexuality, Elisabeth is forced to confront her preconceived notions of family, love, and opportunity.
She finds comfort in corresponding with her childhood friend back home, writer Louisa May Alcott, and spending time in the company of a mysterious Californio Don. Armed with Ralph Waldo Emerson’s Self-Reliance, she sets out to determine her role in building the West, even as she comes to terms with the sacrifices she must make to achieve independence and happiness.
Prospects of a Woman is a fresh, authentic retelling of the West that explores women’s contributions in California and shatters the stereotypes of the typical hard-boiled novel of the West that has captured the American imagination for over a century.


Praise for the Book

“Prospects of a Woman is a fascinating, complex, dark, and beautiful novel of women and sexuality on the frontier of the California gold strike days.”
— Douglas Glover, two-time Governor General’s award-winning author of Elle

“I loved this surprisingly feminist story of Gold Rush-era California! Elizabeth Parker is a heroine to fall in love with–plucky, sensuous, courageous and clear-eyed. It is a rare and unusual pleasure to—finally—have a narrative of the Gold Rush told from a woman’s point of view.”
—Janis Cooke Newman, author of Mary: Mrs. A. Lincoln

“Prospects of a Woman is thoughtful and thrilling. The landscape of California – the rough-scrabble mining towns, the wildness of the river and woods — sings on every page.”
—Alex Myers, author of the novels Revolutionary and Divide

“Prospects of a Woman is a riveting read about a woman who comes to California during the Gold Rush determined to escape societal constraints, find love and strike it rich. As a woman in a man’s world, she faces innumerable challenges but manages to rise above them. This is a bold, rollicking and satisfying tale, one that is hard to put down.”
—Frances Dinkelspiel, award-winning journalist and author of the best-selling books, Tangled Vines and Towers of Gold

PART 1
Upon hearing a circus had come to town, an excited farmer set out in his wagon. Along the way he met up with the circus parade, led by an elephant, which so terrified his horses that they bolted and pitched the wagon over on its side, scattering his vegetables and eggs across the roadway. “I don’t give a hang,” exulted the jubilant farmer as he picked himself up. “I have seen the elephant.”
— NINETEENTH-CENTURY AMERICAN FOLKTALE
1
“The power which resides in him is new in nature, and none but he knows what that is which he can do, nor does he know until he has tried.”
— RALPH WALDO EMERSON, “SELF-RELIANCE”

Elisabeth counted the stitches holding together their dingy canvas tent. Twice. She got 946 both times. Cooped up in the midday heat, she seethed at Nate for leaving her alone. They’d lost too much time already. Refusing to wait another goddamn minute on his frittering and scheming, she untied the tent flaps and crawled out, stretching her arms long overhead. A soft air of relief touched her cheeks. Aching with hunger, she stumbled downriver, in the direction of Culoma Town. She hadn’t eaten since a bite of beans for breakfast the day before.
Nate had left early that morning, again. Gone digging for gold in the river, refusing to let her join. Telling her to stay put. Warning about unsavory men roaming around, men with a mind to take what they will. Elisabeth was done waiting on him to bring her something decent to eat. She grabbed her satchel and headed for the river trail, thinking on how she’d get food in her belly with no money left.
She wasn’t thinking about the roaming men but about the blisters on her feet still burning something awful from that long journey getting to the river. Elisabeth walked all afternoon alongside the American River roiling loud, cutting through the valley, tempting her. Tempting Nate. Her eyes burned with the honest light shining lush and vibrant through the narrow valley. The grass glowed golden along the river trail, and the rich green pines marched up the steep sides of the canyon, swaying alive and standing taller and fuller than the scraggly pitch pines at home in Concord. Warm air whooshed through the branches, spreading a sweet smell around.
Arriving in Culoma Town, Elisabeth picked her way through a mess of empty tents strewn haphazard. Plopping down on a log in the center of town, she unlaced her boots to let her stockinged feet breathe and witnessed new beginnings. Industrious fellas buzzed around, hammering up buildings with fresh-hewn boards and siding and plank floors and shingle roofs. Jabbering and rushing. Heaving pails and shovels and pans and timber. Haggling for food and supplies. No women milled about, and she wondered if they were all hiding away too.
Some of the fellas in town noticed her sitting alone on the log. One man dropped his hammer and walked over, stammering and stuttering as if he hadn’t seen a woman in years. She smiled polite, introducing herself as Mrs. Nathaniel Parker. More men came. And more. Until over a dozen stood around gawking at the only woman in Culoma Town. She pulled at her dress collar. Shifted her bottom on the log. Cleared her throat. When a few of the men sat down in the crisped-up grass like they had all the time to waste, she wondered why but didn’t dare ask. A fella with a long curly beard dripping down his chin offered her a cup of cool river water. She took it, gulping. Wiping her cheek with the back of her hand, she reddened with shame. When one man tossed two bits into her empty cup she looked at him coolly, thinking him daft. When another coin clinked into the cup, then another, she didn’t give them back. Didn’t look at the coins either. She simply stared up at the clear sky, fanning herself with her shabby straw hat, acting like she couldn’t care less if those foolish men wanted to waste good money just to sit near a woman looking not exactly pretty.
“I’m not out here to beg,” she said. “Of course not,” said the long-beard fella. She shuffled her unlaced boots, tamping down the dry grass. “I’m simply out getting some air,” she said. “We all see that,” he said. An older man, wrinkled up like a prune, scooted up to her left knee. She caught him looking her up and down, leering, and she wanted to slap him for the lack of manners but held back. Letting men stare for money was unseemly, no matter the circumstances, but she knew each clink of a coin meant she and Nate would eat tonight. Oh, he’d be furious, of course. He’d probably even accuse her of flirting. Maybe she was. Flirting. Encouraging. She didn’t care. She needed a proper supper and a hot bath. Besides, the men seemed harmless.
She considered how many coins those fools had given her, but was too afraid to count for fear they’d wise up to this absurd payment-for-gawking scheme and demand all those coins back. The men stared at her wide-eyed while a pecker pounded on a nearby trunk, knocking and knocking for grubs, matching the thud in her head.
“Any of you know a Henry Goodwin?” Elisabeth asked. “That your husband?” “My father. He settled a claim up the North Fork,” she said. It’d been nearly a month since he’d run off with that Indian girl, and she still stung sore and angry at his leaving. She convinced herself he’d change his mind. Convinced
he’d return to the claim eventually.
“Sing us a song?” A prune-face fella asked. “Not hardly,” she said. “Can’t? Or won’t?” Not exactly delicate, Elisabeth lacked the finer qualities admired in most ladies. Her singing sounded more feeble frog than melodious finch, and she had no patience for sitting still for parlor conversations, finding the feminine topics of curtain colors and canning peaches dreadfully dull. Nate said she walked too heavy, but she knew he’d appreciated her strong back when they’d taken turns pushing their cart loaded down with his case of books through the foothills and into the river basin.

Born and raised on the American River in Sacramento, Wendy Voorsanger has long held an intense interest in the historical women of California. She started her career in Silicon Valley, writing about technology trends and innovations for newspapers, magazines, and Fortune 100 companies.
She currently manages SheIsCalifornia.net, a blog dedicated to chronicling the accomplishments of California women through history. Her debut historical novel, Prospects of a Woman will be published in October 2020 (She Writes Press); an excerpt entitled “Shifting in California” won 1st place in the California Writers Club short story contest and is published in the Fault Zone: Shift: An Anthology of Stories.
She earned a B.A. in Journalism from California Polytechnic State University in San Luis Obispo and an MFA from Vermont College of Fine Arts. She is a member of the Castro Writers’ Cooperative, the Lit Camp Advisory Board, and the San Mateo Public Library Literary Society.
In addition to being an author, Wendy has worked as a lifeguard, ski instructor, and radio disc jockey. Wendy lives in Northern California with her husband and two sons.
Connect to the author via her website, Facebook, Goodreads, Instagram, and blog.

This showcase, excerpt, and blog tour brought to you by PR by the Book