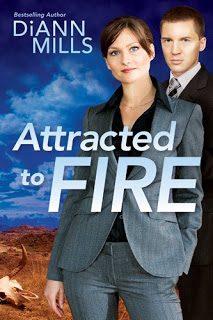 Only the best in the Secret Service apparently make it to the Presidential detail team, and that is what Meghan Connor dreams about. She was fortunate to be on the Vice-President’s detail once and even thwarted an assassination attempt. Now she has been asked by the Vice President to join the team guarding his daughter. Not necessarily a problem but the leader of the daughter’s team, Ash Zinders, hates female agents. Sparks fly, literally and figuratively, when Ash and Meghan must join forces in Attracted to Fire by DiAnn Mills.
Meghan is young, beautiful and an adept agent. She has proven herself when on the Vice President’s detail team and stopping an assassination attempt. Her dream to join the Presidential detail seems to be just out of her grasp until she is dangled a carrot. If she joins the team guarding the Vice President’s daughter, she’ll be considered for the opening on the Presidential team. Meghan knows that this is going to be extremely difficult, not just because the daughter, Lindsey, is an addict (drugs and alcohol) but also because her life has been threatened. After Lindsey attempts suicide, it is decided that she needs to be taken far away from the public spotlight and given the chance to detoxify and quit her addictive lifestyle once and for all.
Meghan and Ash clash in their initial attempts to work together but eventually they both come to respect one another as agents. Their burgeoning friendship is put to the test when Lindsey arrives and is adamantly opposed to rehabilitation. To make matters worse, after the resignation of the current President due to health reasons, Lindsey’s father is now forced to step-up and become President. No one is to know where Lindsey is while she rehabilitates but the threats continue against her and her family. But after one agent is murdered on the remote Texas ranch where Lindsey is sequestered, more questions than answers are raised. Is it possible there is a conspiracy against Lindsey’s father? Can Ash and Meghan uncover the truth before more lives are lost and the country is imperiled?
Although Meghan and Ash are the primary characters in Attracted to Fire, I found Lindsey’s story to be more compelling. Lindsey is not only a rebellious young woman that has taken the wrong path, but she isn’t sure how to set herself free. She’s afraid to trust anyone because her trust has been abused so many times in the past, especially by some that have close ties to her family. Meghan, Ash and Lindsey all overcome their preconceived notions and grow to like and respect each other. Meghan’s faith isn’t “in your face” but makes a nice adjunct to the overall story. Attracted to Fire is a well-written romantic suspense read, perfect for a lazy afternoon or weekend.
Disclaimer: I received this book free for review purposes from NetGalley. I was not paid, required or otherwise obligated to write a positive review. The opinions I have expressed are my own. I am disclosing this in accordance with the Federal Trade Commission’s 16 CFR, Part 255: “Guides Concerning the Use of Endorsements and Testimonials in Advertising.”
Do Not Sell My Personal Information
Follow The Book Diva's Reads on WordPress.com