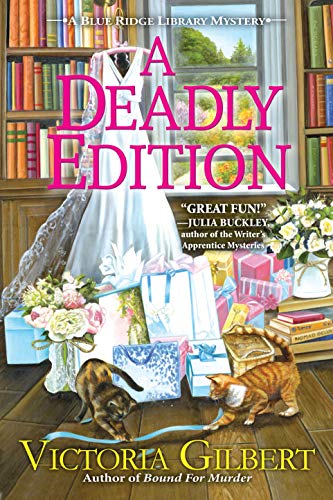 “‘Til death do us part’ could be closer than the bride realizes in Victoria Gilbert’s tantalizing fifth Blue Ridge Library mystery.”
The pursuit to acquire a rare illustrated book turns deadly, and on the eve of her upcoming wedding, library director Amy Webber is drawn into a web of treachery and betrayal that could derail her happy day–and maybe just claim her life.
Planning a wedding can be murder–sometimes literally. At a party celebrating their upcoming nuptials, Taylorsford, Virginia library director Amy Webber and her fiancé Richard Muir discover the body of art dealer Oscar Selvaggio–a bitter rival of their host, Kurt Kendrick.
Both had been in a heated battle to purchase a rare illustrated volume created by William Morris’s Kelmscott Press, so suspicion immediately falls upon Kurt. Amy knows that Kurt has a closet-full of skeletons from his past–but she can’t believe he’s guilty of murder.
Amidst an avalanche of wedding preparations, Amy begins an investigation with the help of her aunt Lydia Talbot and the new mayor of Taylorsford, Sunshine “Sunny” Fields. Much to Lydia’s dismay, her boyfriend, art expert Hugh Chen, becomes convinced of Kurt’s guilt and launches an investigation of his own. As the case hits painfully close to home, the stakes become impossibly high–and the danger all too real.

This is a tour-wide giveaway for one (1) print copy of A Deadly Edition by Victoria Gilbert. This giveaway is open to US residents only. If the Rafflecopter form isn’t displayed below, please click here to enter. Void where prohibited.

Good day, my book people. I’m always happy to welcome fellow book people to my blog and today I’m happy to announce a nice change of pace as I’m hosting a visit by the character Zelda Shoemaker from the Blue Ridge Library Mystery series, including the latest Past Due for Murder. I hope you’ll enjoy hearing about Taylorsford, Virginia from the one and only Zelda Shoemaker. Thank you, Ms. Shoemaker, for enlightening us all about your town and it’s residents.

Hello everyone! It looks like I finally get my own guest post. It’s about time, I have to say. Honestly, I’m the person who really knows what’s going on in Taylorsford, but I rarely get the opportunity to share everything I know.
Now my significant other, Walt Adams, would tell you that I do plenty of talking. Maybe he’s right—I am a very social person. Well, I had to be, didn’t I, when I was postmistress for the town for all those years? I had to know everyone, and where they lived, and who lived with them, and that sort of thing. It helped me to do my job.
Now that I’m retired, I still like to keep up with the latest news. (Walt would call it “gossip,” but I don’t consider it as such). Taylorsford remains a fairly small town, and even though there’s been a lot of growth on the outskirts over the years, I still know almost everyone. Not by name, maybe, but I do recognize who’s a resident and who’s not. Now, don’t think I discriminate against newcomers or anything. I try to be friendly to all our new residents and visitors, which is not something everyone in town appreciates. There’s a few, like that snooty Elspeth Blackstone, the current mayor’s wife, who thinks that we should restrict who moves into Taylorsford, so that the “wrong sort,” as she calls it, don’t “bring down the tone” of the town. I say that’s a lot of nonsense. Even if those Blackstones have lived here forever, I’d take a whole boatload of new folks over them. In fact, I’m currently acting as the campaign manager for a fine young lady called Sunshine Fields, who’s running for mayor of Taylorsford. Honestly, I’d support anyone opposing Bob Blackstone, but I also think Sunny would make a fantastic leader.
Oh, you want to know more about me? Well, all right, I’ll tell you, although it’s not a very exciting story. The truth is, I’ve lived in Taylorsford all my life. I’ve even had the same best friend since childhood— Lydia Litton Talbot. She and Walt and I all rode the same bus to elementary school, and have been friends ever since. Of course, since Walt was one of the few African-Americans living in the area when we were young (that’s changed since then, thank goodness) he and I couldn’t date when we were in our teens, even though we wanted to. I mean, you have to understand—that was back in the sixties when there was a lot of racial tension in our county high school. I guess we could’ve stood up to the prejudice back then, but we were both too concerned about how our families would feel, or how they might be affected by the stupid behavior of others, to fight against that taboo.
So we both ended up marrying other people. It wasn’t a tragedy, by any means—he loved his wife just like I loved my husband—and we always remained friends. Then, after his kids were grown (I couldn’t have any, sadly) and his wife died, we started dating. Of course, I was a widow by that point. We kept our relationship secret for a while. Just out of habit, I guess. But then Sunny and her friend, Amy Webber—who’s Lydia’s niece, by that way—convinced us to go public. And I must say, much to our surprise, no one seems to have a problem with our relationship. Which just goes to show that sometimes the “good old days” weren’t quite as rosy as some people seem to think. Today is better, in a lot of ways.
Now I spend my time taking care of my house and garden, dating Walt, and spending time with Lydia and some other friends. I also volunteer at the public library where Amy works. She’s the library director in Taylorsford, you know. A smart girl, and quite sweet, although she does seem to have a nose for trouble. I mean, she’s always stumbling over dead bodies—can you imagine? I’m just happy she’s escaped some of the dangerous situations she’s gotten herself into, and found herself a good man along the way. That Richard of hers is as nice as he is good-looking, and that’s a rare combination, let me tell you. Now, if we could just find Sunny someone just as fine. I mean, even Lydia is dating again, and she seems to have lucked out and hooked quite a catch later in life, just like I did with Walt. So now there’s just Sunny. Poor lamb, she tends to date a lot of people but it never seems to work out. But she’s such a dear, beautiful, girl I’m sure she’ll meet someone special someday.
Anyway, that’s enough chatter from me. I don’t want to prove Walt right about all that talking. I’ll just wish you a great day, and remind you to tell everyone who’s eligible to vote for Sunny for mayor! I really believe she’ll bring some wonderful, and much-needed, change to my lovely old town.
Oh, and if you hear or see anything interesting when you’re visiting Taylorsford, please share! I’m always happy to hear all the latest news.

Raised in a historic small town in the shadow of the Blue Ridge Mountains, Victoria Gilbert turned her early obsession with books into a dual career as an author and librarian.
Victoria’s first cozy mystery series, the Blue Ridge Library Mystery series, garnered her a three-book deal with Crooked Lane Books, which has since been expanded to five books. The first two books in the series have been optioned by Sony Pictures Television, and the first three were or will be produced in audiobook by Tantor Media.
Victoria also just inked a 2-book deal with Crooked Lane for a new cozy series, the Booklovers B & B series, set in historic Beaufort, NC.
A member of Mystery Writers of America, International Thriller Writers, and Sisters in Crime, Victoria is represented by Frances Black at Literary Counsel.

Past Due for Murder:
A Blue Ridge Library Mystery
by Victoria Gilbert

Past Due for Murder: A Blue Ridge Library Mystery

Has a curse fallen on the small town of Taylorsford, Virginia? After a young woman goes missing during a spring bonfire, library director Amy Webber must wade through the web of lies only to find a truth that she may not want to untangle.

Spring has sprung in quaint Taylorsford, Virginia, and the mayor has revived the town’s long-defunct May Day celebration to boost tourism. As part of the festivities, library director Amy Webber is helping to organize a research project and presentation by a local folklore expert. All seems well at first—but spring takes on a sudden chill when a university student inexplicably vanishes during a bonfire.

The local police cast a wide net to find the missing woman, but in a shocking turn of events, Amy’s swoon-worthy neighbor Richard Muir becomes a person of interest in the case. Not only is Richard the woman’s dance instructor, he also doesn’t have an alibi for the night the student vanished—or at least not one he’ll divulge, even to Amy.

When the missing student is finally discovered lost in the mountains, with no memory of recent events—and a dead body lying nearby—an already disturbing mystery takes on a sinister new hue. Blessed with her innate curiosity and a librarian’s gift for research, Amy may be the only one who can learn the truth in Past Due for Murder, Victoria Gilbert’s third charming Blue Ridge Library mystery.