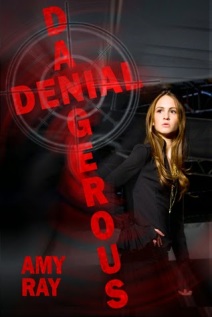 Denying the past proves deadly for BK Hartshaw and Trevor Mayhew in this gripping noir novel where nothing is as it seems. BK is a rising star at a public relations firm, and tonight’s charity ball should be a high point in her career. But a closely guarded secret threatens to destroy her chance for happiness with the only man she’s ever loved… a man who is also hiding a deadly secret. Trevor has tried to put the past behind him, pretending it never happened. But the conniving father he’s been running from for years has finally found him-and is determined to settle the score once and for all. BK and Trevor’s deeply buried secrets are about to catch up with them-and everyone they know and love. Who will pay the ultimate price for their dangerous denials?

“The sins of the parents are visited upon their children in this entertaining thriller. BK’s (short for Beatrice Karen) and Trevor’s lives collide when a charity ball erupts into violence. Tightly plotted suspenseful moments and a deftly-executed plot twist combine to keep readers holding onto this novel until the wee hours.” – Publisher’s Weekly

BK Hartshaw and Shelby Fulton have been best friends since they were teenagers. Shelby was born into a wealthy and influential family. BK’s mother married into a wealth by snaring an entrepreneur. BK and Shelby met when BK moved into her stepfather’s house beside Shelby’s family. They were roommates at boarding school, in college, and again as young, urban professionals striving to make a name for themselves in their chosen professions. Shelby was there for BK when she was ostracized by her family for being fat and tries to be there for her while BK is dealing with anorexia. BK has been by Shelby’s side while she dealt with a psycho stalker and continued to be her support system years later. Shelby is in love with her former high school crush, a doctor, and BK is in love with one of her clients, a young entrepreneur – Max Emerson. Just when they both think that all is right in their worlds they receive the biggest surprises of all. On the night that should be a shining jewel of achievement in BK’s career in public relations, everything seems to spiral out of control and lives are at risk. People aren’t who they seem to be and secrets from the past may end with bloodshed. Will BK and Shelby be able to survive?
I began Dangerous Denial late yesterday evening and read it through until the last page in one sitting. Ms. Ray provides an interesting glimpse into the present with her prologue and then throws you back in time to 1977, 1985-86, 1996, and then back to the present – the early 2000s. At first I wasn’t quite sure how these three time periods would intersect, but trust me having the backstory to the major and minor characters is necessary for everything to make sense. Dangerous Denial provides the reader with a lot in one compact story: mystery, suspense, romance, murder, stalking, rape, eating disorders, child abuse, dysfunctional families, and more. Just when I thought I knew who everyone was and their role in the story, Ms. Ray threw in a nice twist. (No, I’m definitely not going to tell you what the twist is, you’ll have to read the story for yourself!) What I can tell you is that Ms. Ray has crafted an amazingly intricate story with vivid characters that kept this reader’s attention from beginning to end. I found Dangerous Denial to be a fast-paced read with convincing good and bad guys as well as realistic scenarios. If you’re looking for a great mystery-suspense-thriller with a bit of romance and a lot more, then you’ll want to add Dangerous Denial to your TBR list. I look forward to reading more from Ms. Ray in the future.

Want to dine out and discuss some great books? Enter this giveaway for your chance to win a prize that includes a $25 GC to Applebees AND two ebook downloads from Ms. Ray’s publisher, Barking Rain Press.

Disclaimer: I received a copy of this book free for review purposes from the author via TLC Book Tours. I was not paid, required or otherwise obligated to write a positive review. The opinions I have expressed are my own. I am disclosing this in accordance with the Federal Trade Commission’s 16 CFR, Part 255: “Guides Concerning the Use of Endorsements and Testimonials in Advertising.”