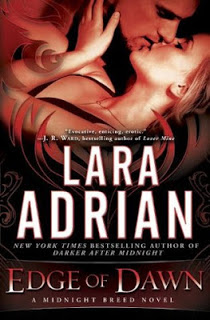 Twenty years after the terror of First Dawn—when mankind learned that vampires lived secretly among them—the threat of violence reigns as the two species struggle to coexist. The only group preserving the fragile harmony is the Order, an elite cadre of Breed warriors dedicated to protecting humans and vampires alike. And in this precarious world of torn loyalties and shattered trust, Mira, a fiery squad captain, finds that every fight bears an intensely personal cost.

Raised among the Order, Mira has always believed in the warrior’s code of swift—and even lethal—justice. But the one thing she desires more than the Order’s hard-won acceptance is Kellan Archer, a sexy but troubled Breed fighter. In love with him since childhood, Mira once broke through his tough exterior during an unexpected night of rapture, but the next day he mysteriously disappeared, never to return.

Kellan didn’t think he would ever see Mira again—or have to confront the truth of why he left. After abandoning the Order years ago, he now leads a band of human rebels intent on carrying out their own vigilante rule of law. Yet a high-profile kidnapping assignment brings him face-to-face with the past he sought to avoid, and the striking woman he has tried desperately to forget. And as tensions mount and the risk of bloodshed grows, Kellan and Mira must take sides—between the competing missions that dominate their lives, and the electrifying passion that claims their hearts.

Edge of Dawn is the eleventh book in the Midnight Breed series by Ms. Adrian, and the action takes place twenty years after the last book in this series. All of these books are classified as paranormal/fantasy romance featuring descendants of an alien race that feed on human blood. These aliens are all male, adorned with skin glyphs (similar to tattoos but change color due to emotions) and have supernatural strength and speed. These Breed males can only mate with human females known as breedmates that are recognized by special birthmarks. Once a Breed and breedmate are together as a couple, the human female ceases to age and becomes the source of sustenance for her Breed husband as his blood sustains her prolonged life and agelessness.
I’ve read, and generally enjoyed, all of the books in this series. However, Edge of Dawn just failed to pull me in. I rather enjoyed seeing the new generation of breed offspring from previous couples introduced in past books as adults as well as the grown-up Mira. The enjoyment ended with the postwar Breed-Human peace initiatives and the Global Nations Council or GNC (similar to the UN but with broader powers). Past books have dealt with rogue Breed males and the one surviving ancient being used to bring about a series of first generation Breed males. (Ancients had unsurpassed strength and speed; their offspring or first gen Breed males had slightly lesser strength and speed with decreases in strength and speed with each successive generation of Breed males.) Mira and Kellan’s story had just enough twists to make it interesting, but I think there was just a bit too much going on in Edge of Dawn. The story fast forwarded too many years since the last book not to mention the many twists and conspiracies presented for it to be interesting for me. If you enjoy paranormal/fantasy romance with a vampire twist, then the Midnight Breed series and Edge of Dawn may be perfect for you.
Disclaimer: I received a copy of this book free for review purposes from the publisher via NetGalley. I was not paid, required or otherwise obligated to write a positive review. The opinions I have expressed are my own. I am disclosing this in accordance with the Federal Trade Commission’s 16 CFR, Part 255: “Guides Concerning the Use of Endorsements and Testimonials in Advertising.”