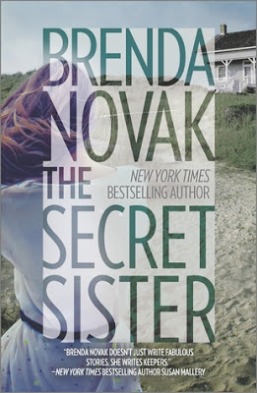 Did she once have a sister? Has her mother lied all these years? Why?

After a painful divorce, Maisey Lazarow returns to Fairham, the small island off the North Carolina coast where she grew up. She goes there to heal—and to help her brother, Keith, a deeply troubled man who’s asked her to come home. But she refuses to stay in the family house. The last person she wants to see is the wealthy, controlling mother she escaped years ago.

Instead, she finds herself living next door to someone else she’d prefer to avoid—Rafe Romero, the wild, reckless boy to whom she lost her virginity at sixteen. He’s back on the island, and to her surprise, he’s raising a young daughter alone. Maisey’s still attracted to him, but her heart’s too broken to risk…

Then something even more disturbing happens. She discovers a box of photographs that evoke distant memories of a little girl, a child Keith remembers, too. Maisey believes the girl must’ve been their sister, but their mother claims there was no sister.

Maisey’s convinced that child existed. So where is she now?

Maisey Lazarow never imagined herself return to Fairham, but after the death of her infant daughter, her divorce after ten years of marriage, and her stalled writing career her options are limited. The only thing she’s looking forward to doing is being there for her older brother Keith. Maisey’s return opens up past hurts and then she uncovers a family secret in The Secret Sister by Brenda Novak.
Maisey knows that her family is no one’s definition of normal. Her mother can only be classified as cold. Her mother, Josephine Coldiron Lazarow, has been married multiple times and she feels as if she has the right to control her children’s lives even though they are both in the thirties. Maisey’s mother didn’t approve of her ex-husband and doesn’t approve of her current romantic interest, Rafe Romero. Now that Maisey is attracted to someone and trying to move on, her ex-husband decides to come back into her life and wants to start again. Maisey is also trying to uncover who the little girl is in pictures that have been hidden away for decades. The more she uncovers the more questions are raised. Does she have an older sister? What happened to her? Why won’t anyone discuss her? And the bigger question, is she in love with Rafe?
I found The Secret Sister to be a quick and enjoyable read. I enjoyed most of the characters, especially Maisey, Rafe, and Rafe’s daughter Laney. I enjoyed reading about Maisey’s quest to uncover the truth about her sister against impossible odds, including her mother’s decision to kick her out of a family-owned bungalow and firing her from a family-owned business (told you she was cold). Maisey’s brother Keith has mental health issues and is a drug-addict. Needless to say, his erratic behavior adds a lot to the turmoil and drama of the story. The Secret Sister offers romance, tons of family drama, intrigue due to a family secret, and a lot more. If you’ve enjoyed reading anything by Ms. Novak in the past, then you’ll want to read The Secret Sister. If you haven’t read anything by Ms. Novak, then The Secret Sister is a good place to start.