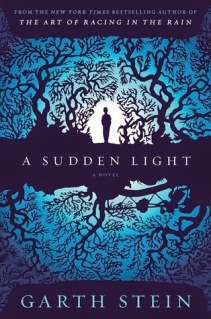 When a boy tries to save his parents’ marriage, he uncovers a legacy of family secrets in a coming-of-age ghost story by the author of the internationally bestselling phenomenon, The Art of Racing in the Rain.

In the summer of 1990, fourteen-year-old Trevor Riddell gets his first glimpse of Riddell House. Built from the spoils of a massive timber fortune, the legendary family mansion is constructed of giant, whole trees, and is set on a huge estate overlooking Puget Sound. Trevor’s bankrupt parents have begun a trial separation, and his father, Jones Riddell, has brought Trevor to Riddell House with a goal: to join forces with his sister, Serena, dispatch Grandpa Samuel—who is flickering in and out of dementia—to a graduated living facility, sell off the house and property for development into “tract housing for millionaires,” divide up the profits, and live happily ever after.

But Trevor soon discovers there’s someone else living in Riddell House: a ghost with an agenda of his own. For while the land holds tremendous value, it is also burdened by the final wishes of the family patriarch, Elijah, who mandated it be allowed to return to untamed forestland as a penance for the millions of trees harvested over the decades by the Riddell Timber company. The ghost will not rest until Elijah’s wish is fulfilled, and Trevor’s willingness to face the past holds the key to his family’s future.

A Sudden Light is a rich, atmospheric work that is at once a multigenerational family saga, a historical novel, a ghost story, and the story of a contemporary family’s struggle to connect with each other. A tribute to the natural beauty of the Pacific Northwest, it reflects Garth Stein’s outsized capacity for empathy and keen understanding of human motivation, and his rare ability to see the unseen: the universal threads that connect us all.

Trevor Riddell is a typical fourteen-year-old boy until his parents file bankruptcy and decide on a trial separation. He is then uprooted from his East Coast life to his father’s ancestral home in Washington State. It is here that Trevor meets, for the first time, his grandfather and his aunt. He also discovers more about his father in one week than he has in the past fourteen years. Trevor’s summer at Riddell House is filled with four-generations of father-and-son angst and drama, as well as ghosts. Is it possible for this normal teenager to uncover the secrets in his family and unlock the past so everyone in his family can move on?
A Sudden Light is an amazing blend of one family’s history, self-discovery, historical drama, contemporary fiction, and the supernatural all rolled into one incredible story. Trevor doesn’t set out to uncover his family’s secrets when he arrives at Riddell House, but he quickly begins to realize that all is not what it seems. He hears music in the ballroom and witnesses an apparition dancing, supposedly his grandmother Isobel. He bonds with his grandfather Samuel and learns to deal with his dementia. He admires his Aunt Serena but also realizes that she isn’t the intelligent and beneficent person she appears to be. He also realizes that his father is a broken man, partially by his past at Riddell House and partially because of broken dreams. As Trevor explores Riddell House he learns about his great-great-grandfather Elijah, his gay great-uncle Ben (one of the other ghosts), his great-grandfather Abraham, his grandmother Isobel, his grandfather Samuel, and more. One of the enduring Riddell family legacies seems to be the dysfunctional relationship between father and son. It might seem unrealistic to think that a teenager could mend the broken ties within his family after generations of dysfunction, but that is exactly what Trevor attempts to do.
I could go on and on about the Riddell family’s generational dysfunction, about the ghosts that seem to direct Trevor’s quest, about Serena and Jones (Trevor’s father) machinations to get their father to agree to sell the house and property to a real estate developer, or about Trevor’s growth as a person throughout the story. What I will say is that A Sudden Light is an engrossing read about one boy and his family, those living and those deceased. I enjoyed reading about the history of the Riddell family and Riddell House. I felt sympathy for Benjamin as he mourned the death of his lover and soul mate. I felt sympathy for his father Elijah as he mourned the death of Benjamin. I felt excitement tempered with anxiety as Trevor explored the house and interacted with the ghosts. I was angry with Trevor’s father Jones as he drowned his sorrows in alcohol while attempting to regain his lost youth. We won’t even discuss how I felt about Serena and her passive-aggressive manipulations (I didn’t like it). Be prepared because the ending is a bit of surprise (no I won’t tell you what happens, read the book!). If you like contemporary fiction, historical fiction, ghost stories, or family drama, then this is the book for you to read. If you haven’t guessed by now, I loved A Sudden Light and can recommend it to anyone that simply enjoys reading a well-crafted story.

Listen to the author, Garth Stein, discuss A Sudden Light: