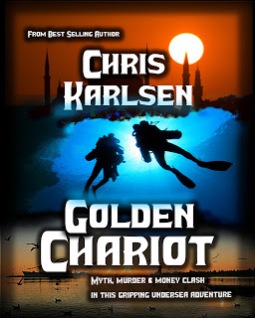 The rare discovery of a ship sunk during the time of the Trojan War has been found off the coast of Turkey, near Troy. Charlotte Dashiell is an American nautical archaeologist and thrilled to be part of the recovery team. The wreck may contain proof of her highly controversial theory about the Trojan War.

Charlotte is present when the Turkish government agent assigned to guard the site is murdered. Her possible involvement and a questionable connection to a private collector of black market relics bring her under suspicion. Atakan Vadim is the Turkish agent sent to investigate her. Unknown to either of them, the smuggler behind the murder plans to steal a valuable artifact and frame Charlotte for the theft…after they murder her.

Charlotte Dashiell is a doctoral student of nautical archeology. She is spending her summer working a find in Turkey. Her hope is to find proof of the mythic kingdom, Troy as mentioned in The Iliad. Tragedy strikes shortly after her arrival; the boat she’s on is struck by a trawler and the Ministry of Culture representative is killed. A new ministry agent is assigned to the archeological group, Atakan Vadim, and he seems more intent on investigating Charlotte than on his friend and fellow agent’s death . . . or so it seems.
What follows is a web of international intrigue centered on the smuggling of valuable archeological artifacts and revenge, and Charlotte is the center of the attraction. She is suspect because her stepfather’s company donated money to facilitate the archeological expedition and his business partner is a known collector of smuggled art. It doesn’t help that Charlotte is the one that turned him to the authorities. As the team of archeologists race to beat the clock and the ravages of nature (underwater earthquakes are gradually destroying the safety of the underwater site), Atakan and Charlotte must also race to figure out which artifact is at risk and who is behind the attempted theft.
Golden Chariot is a quasi-action-thriller with hints of romance. Ms. Karlsen has provided characters that have quirks and faults which provide the necessary element of realism. Charlotte and Atakan are likeable characters and humor is brought into the story with their linguistic wrangling, such as explaining the difference between being a coot versus a cootie. What starts off as a working relationship develops into friendship and then much more. Golden Chariot is a fast read that provides just enough action, romance and international intrigue to make it a unique reading experience.

Disclaimer: I received a copy of this book for free via Full Moon Bites Blog Tours. I was not paid, required or otherwise obligated to write a positive review. The opinions I have expressed are my own. I am disclosing this in accordance with the Federal Trade Commission’s 16 CFR, Part 255: “Guides Concerning the Use of Endorsements and Testimonials in Advertising.”