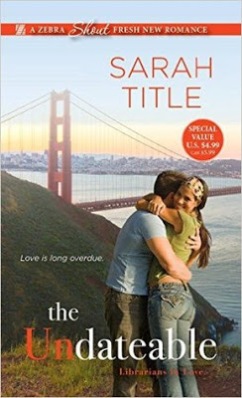 One San Francisco librarian would rather check out a good romance than dare to experience it herself. Luckily, her own next chapter is full of surprises…

Melissa “Bernie” Bernard isn’t familiar with fame. After all, she works at a college library with hardly any visitors. But when a video of a marriage proposal in her stacks goes viral, it’s not the bride and groom who capture the Internet’s attention. It’s Bernie—caught rolling her eyes. Now, just as she’s ready to go into hiding and permanently bury her nose in a book, a handsome reporter appears with a proposal of his own…

If Colin Rodriguez doesn’t do something big to attract new readers, his boss will hire someone else to dole out dating advice. Determined to prove he’s an expert at romance—despite his own pitiful track record—he pitches a story: He will find dates for the undateable. Specifically, for the now-infamous, love‑hating librarian at Richmond College.

Even though Bernie doesn’t believe in happily-ever-afters, she’s not one to resist a good challenge. Yet with one disastrous date after another, she’s ready to give up. Until Colin proves he’ll do anything to find her the perfect match—even if it means putting himself up for the role…

Imagine living a quiet life as a college librarian. One day you go into work, a flash mob descends on your workplace, a co-worker is proposed to, and the only thing that comes out of this (other than the co-worker becoming engaged) is an internet meme featuring your face. That’s exactly what has happened to Melissa “Bernie” Bernard. Her quiet and somewhat reserved, and yes, somewhat stereotypical life as a librarian has been destroyed. She is now the butt of librarian jokes due to the viral “disapproving librarian” meme. If that’s not bad enough, her boss has made bookmarks and other promotional items featuring the meme to take advantage of the free publicity. The only thing left for Bernie is to take a few days off work. Happy to stay at home with her elderly neighbors and their adorable poodle, Starr, Bernie is then asked to take part in a makeover and dating project for a local online magazine. Colin Rodriguez is a journalist at women’s interest online magazine. His role is to provide the man’s point-of-view on all things female. Now Colin’s job might be on the line as the online magazine seems to want only one reporter and there’s a young journalist on staff vying for Colin’s job. Unbeknownst (great word) to most, Colin also operates an online advice blog as his alter-ego “Dear Maria.” Colin’s younger sister knows Bernie from college and before you know it, Bernie has committed to 30 dates in 30 days, a radical makeover (so long comfortable shoes), and a nosy journalist, Colin Rodriguez, tagging along documenting everything. Is it possible for Colin to find the perfect date for Bernie? Will this experience cause Bernie to turn her back on dating? Will Colin’s career be saved? Can Colin take his own advice when it comes to work, life, and love?
The Undateable is the first book in a new series, Librarians in Love, by Sarah Title. Bernie enjoys wearing comfortable clothing and shoes and doesn’t feel that women have to wear makeup in order to be considered attractive. Unfortunately, the online magazine doesn’t agree. Bernie is pushed outside of her comfort zone with a new wardrobe, new lingerie, new shoes (that she can’t walk in without falling), a new hairstyle, and makeup. You probably know this whole dating thing isn’t going to go well, but reading about the dates and the date prep is often laugh-out-loud hilarious. Both Bernie and Colin are at turning points in their lives and it’s fascinating reading about what happens next. (No, I’m not going to tell you what happens next. Read the book!) I enjoy reading romance as much as I enjoy reading mysteries and thrillers, and The Undateable was a fast-paced, engaging, and wholly enjoyable read. It’s also pretty cool that Ms. Title included her poodle Starr as a character in the novel (trust me, read the book!). I’ve said it before and I’ll say it again, Ms. Title provides stories that are smart, sassy, and sexy. Her female characters are unapologetic (and rightfully so) in their desire to live their lives on their own terms. Her characters are easy to relate to, the stories are plausible, and the settings are the perfect complement to the storylines. Yes, the books have HEA endings, but isn’t that how romance stories are supposed to end?! If you’ve read any of Ms. Title’s previous stories, you’ll definitely want to grab a copy of The Undateable to read as soon as possible. If you haven’t read any of Ms. Title’s previous stories what are you waiting for? Seriously, I’ve recommended them to you repeatedly. Go, grab a copy of The Undateable, and spend a few hours smiling, laughing, and falling in love with her characters and story. I look forward to reading more in the Librarians in Love series.
Disclaimer: I received a free print copy of this book from the author for review purposes. I was not paid, required, or otherwise obligated to write a positive review. The opinions I have expressed are my own. I am disclosing this in accordance with the Federal Trade Commission’s 16 CFR, Part 255: “Guides Concerning the Use of Endorsements and Testimonials in Advertising.”

I enjoyed reading The Undateable by Sarah Title so much that I’m giving away one print copy. This is an international giveaway and the only limitation is that BookDepository must ship to your country (check to see if your country is listed here: http://bit.ly/2lPL3RC). This giveaway runs from 12:01 AM ET on February 28, 2017, through 12:00 AM ET on March 7, 2017. The winner will be announced within 12-24 hours after the giveaway ends. The winner will have 48 hours to respond or a new winner will be chosen. Please note that this prize is being sent via BookDepository and shipping times will vary. To enter, please use the Rafflecopter form below.
a Rafflecopter giveaway The perfect pre-birthday kick-off, #freebies. #Inmymailbox📬📚 was this lovely, WHEN STARS RAIN DOWN by @angelajacksonbrownauthor. Huge thanks to @mochagirlsread and @harpercollins for this addition to my home library. #bookmailisthebestmail #bookstoberead
Okay book people, the big 6 - 0 bday is happening soon and I'm going book shopping. What else would a book diva do to celebrate?! 📚🛒 #bookdivaissues
Reposted from @prbythebook SOULstice Publishing has a virtual book tour going on right now for their Abdi's World by Abdi Abdirahman and Chasing Excellence by Pat Melgares. It'll be running throughout the week, so be sure to check it out!!! #virtualbooktour #SOULsticepublishing #prbtb #prbythebook
#Inmymailbox📬📚 was this lovely, WHILE WE WERE DATING by @jasminepics courtesy of @penguinrandomhouse #readerdewards. Buy books, get more books as a reward. Thank you very much, count me in! #bookmailisthebestmail
#EidMubarak to all my Muslim family and friends.
Another day, another #libraryread.