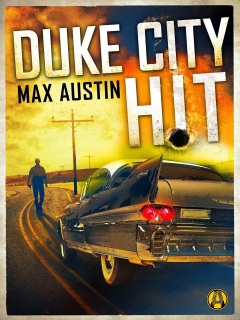 Max Austin takes readers back to Albuquerque for another action-packed thrill ride in Duke City Hit, as an elite assassin takes aim at—well, everyone.

According to Vic Walters, the secret to happiness is low overhead and few demands. Living rent-free in a modest bachelor pad behind his boss’s house, he has no debts, no entanglements, and no expensive relationships. He works just a few days a month, but his bank accounts keep growing.

Vic is a high-priced hitman with a legendary record of success. That is, until someone starts eliminating his marks before he can get to them . . . until his manager puts him in the middle of a vicious drug-cartel feud . . . and until a young man walks into his life with a big .45 and a startling revelation.

For Vic Walters, it’s time to step out of the shadows. Which means it’s killing time in Duke City.