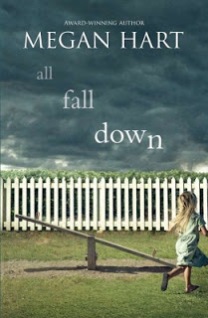 Liesel is a happily married woman. She and Christopher have a good relationship and a good life, but Liesel is beginning to want more. She wants children. Sunny has only known the compound. She isn’t happy, but she isn’t exactly unhappy. The last thing she expects is to leave the only family she’s ever known and start anew. Liesel and Sunny both struggle with new obstacles and strive to remain steadfast in All Fall Down by Megan Hart.
Liesel knows that her husband Christopher doesn’t really want kids, but the last thing either of them expects is to have Sunny arrive on their doorstep with three small children in tow. Bigger surprise is that Sunny is Christopher’s child from his first marriage. She’s only nineteen years old and has three children ranging in age from four to eight months old. Liesel wants to make the best of an obviously awkward and bad situation and welcomes Sunny or Sunshine and her children, Happy, Peace and Bliss. Sunny isn’t quite sure how to deal with these new changes and desires the simple family life she’s always known. She didn’t relish the punishments or lack of food, but she openly accepted having someone tell her what to do, at what time and where. She even allowed the leader John Second and others to use her sexually and father her three children. When Liesel, Christopher and Sunny realize the family at the compound has committed mass suicide, or “entering the gate” as Sunny puts it, they all realize there is no going back.
Becoming a mother, or even a stepmother and step-grandmother, overnight with little forewarning and preparation is a bit more than Liesel expected. She quickly becomes overwhelmed and stressed out. It doesn’t help that Christopher isn’t home much and she’s run off her feet. There are major adjustments to be had on all sides with Liesel and Sunny making the major adjustments. Sunny must learn to accept her newfound freedoms, but she yearns for more. She’s also feeling a certain amount of survivors’ guilt because she was left behind.
After reading the first chapter, I presumed that this was not going to be a happily-ever-after book and was waiting for some major tragedy to occur. Ms. Hart keeps the reader twisted emotionally with the guilt and stress felt by Liesel as well as the guilt and bewilderment experienced by Sunny. Both women are trying to fit into some preconceived mold of what is normal. The stresses they both deal with are primarily stressors that they impose on themselves and they both find themselves lacking. This is the true tragedy. I found All Fall Down to be a quick read that, fortunately, does end on a hopeful note with both women learning from the other.
Disclaimer: I received this book free for review purposes from the publisher through NetGalley. I was not paid, required or otherwise obligated to write a positive review. The opinions I have expressed are my own. I am disclosing this in accordance with the Federal Trade Commission’s 16 CFR, Part 255: “Guides Concerning the Use of Endorsements and Testimonials in Advertising.”