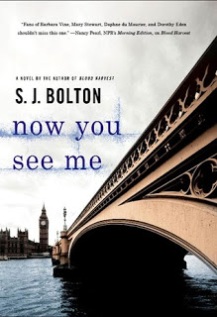 One night after interviewing a reluctant witness at a London apartment complex, Lacey Flint, a young detective constable, stumbles onto a woman brutally stabbed just moments before in the building’s darkened parking lot. Within twenty-four hours a reporter receives an anonymous letter that points out alarming similarities between the murder and Jack the Ripper’s first murder—a letter that calls out Lacey by name. If it’s real, and they have a killer bent on re-creating London’s bloody past, history shows they have just five days until the next attempt.

No one believes the connections are anything more than a sadistic killer’s game, not even Lacey, whom the killer seems to be taunting specifically. However, as they investigate the details of the case start reminding her more and more of a part of her past she’d rather keep hidden. And the only way to do that is to catch the killer herself.

DC Lacey Flint just happened to be in the wrong place at the wrong time and is now the center of an investigation into Jack the Ripper style murders. Initially Lacey isn’t allowed to help with the investigation as she is only considered a witness. However, after the second murder and the apparent similarities to Ripper cases, she is brought into the investigation because of her knowledge of Jack the Ripper. Lacey’s status as a witness-turned-expert is quickly called into question when she is brought into the murders through letters and evidence linking her to the case. It doesn’t help that she is attracted to one of the senior investigators, DI Mark Joesbury, or that Joesbury is beginning to believe she might actually be the killer. Lacey knows that the only way to prove she isn’t “involved” is to catch and stop the killer herself. As more murders occur, Lacey quickly realizes she may have a link to the murderer. Will Lacey’s past catch up to her present end her career or her life?
Now You See Me is a mystery-suspense-thriller that captured my attention from the first page to the last. I had some difficulty understanding some of the British slang at first but the context allowed me to guess at the meanings. Lacey is young, inexperienced, reserved, and has just enough flaws to make her all-too-human and very likeable. Mark Joesbury is quiet, intense, and experienced. The attraction between the Lacey and Joesbury provides softness and humor to the story. I found parts of the story relating to the murders a bit gruesome but it wasn’t overly gory. Now You See Me is an intense read as it includes kidnappings  murder, mutilations, drug abuse, prostitution, homelessness, and gang rapes. Ms. Bolton kept me on edge with the twists and turns, as well as ups and downs within the story. The ending was quite a shocker and one I didn’t see coming but thoroughly enjoyed. This was the first book I’ve read by Ms. Bolton, but I very much doubt if it will be my last. If you enjoy well-crafted mystery-suspense-thrillers then you definitely want to add Now You See Me to your reading list. Set aside a weekend, then sit back and savor this book . . . you won’t be disappointed.
Disclaimer: I received a copy of this book free for review purposes from the publisher via NetGalley. I was not paid, required or otherwise obligated to write a positive review. The opinions I have expressed are my own. I am disclosing this in accordance with the Federal Trade Commission’s 16 CFR, Part 255: “Guides Concerning the Use of Endorsements and Testimonials in Advertising.”