Good day, my fellow book lovers. As I’ve said before, and will probably say again and again, I’m always excited to host visits from authors, fellow bloggers, and other book people. Today’s bookish person is another character, and she’s stepping off the pages from the Kebab Kitchen Mystery series, including the latest One Feta in the Grave by Tina Kashian, Lucy Berberian. Lucy is the manager of the Kebab Kitchen restaurant and the featured amateur sleuth in this series. This morning, Ms. Berberian will be introducing herself to us via a little Q&A. Thank you, Ms. Berberian, for stopping by and I’ll turn the blog over to you.

First, I’d like to thank The Book Diva’s Reads for inviting me as a guest today to celebrate the release of One Feta in the Grave. I’m happy to be here!

What is your name?
Lucy Anahid Berberian
How old are you?
I’m thirty-two.
What is your occupation?
I’m the manager of my family’s Mediterranean restaurant, Kebab Kitchen, at the Jersey Shore.
How did you come to be a restaurant manager?
I didn’t plan to be a restaurant manager. I’m a refugee of a Philadelphia law firm. I returned home only to find myself sucked back into my family’s Mediterranean restaurant. But after realizing the business isn’t so bad and my true friends are in Ocean Crest, I stepped up and decided to manage the restaurant so my parents could ease into retirement. It’s been challenging work, but I love it.
Tell us about your Jersey Shore town.
Ocean Crest is a small town that triples in population during the summer season. It’s quaint and has a mile-long boardwalk that brags a pier with an old-fashioned wooden roller coaster and Ferris wheel. It’s a perfect place to vacation with your family—minus any murders.
Tell us more about that famous boardwalk.
The Jersey Shore boardwalk is iconic! The first boardwalk was created by Andrew Boardman in 1870 in Atlantic City, NJ. Over the years, the boardwalk spread to the neighboring Jersey Shore beach towns. These sprawling boardwalks with dozens of eateries, shops, and amusement piers have become famous.
I jog the Ocean Crest boardwalk three times a week. Working with food all day makes exercise a necessity. It’s an eclectic mix of shops and eateries. I love the frozen custard, perusing the T-shirt and novelty shops, and riding the Ferris wheel. Also, my encounters with boardwalk shop owners, tattoo parlors, and a psychic medium all make for interesting witnesses and suspects.
Amateur sleuth of profession?
Amateur! The word sleuth makes me nervous. I didn’t set out to solve crime, but I have an inquisitive mind. Other’s say I’m nosy. I blame it on my law school education.
Who’s your sleuthing partner?
Katie Watson has been my best friend since grade school. She is also married to an Ocean Crest beat cop and I’ve been living in their guest bedroom in their cozy rancher since returning home. She’s also my sleuthing partner and we investigate crimes together.
Do you have a significant other?
I’ve recently started dating my head chef, Azad. We have a long history, and he broke my heart after college, but since I’ve returned home, he’s convinced me to give him a second chance. Azad has shown he has changed and he even quit his fancy Atlantic City job as a sous chef to help me and work as a head chef for Kebab Kitchen. At first, things were as sticky as baklava syrup between us, and I wasn’t sure mixing business with pleasure was a good idea. But so far, things have been heating up between us in and out of the kitchen…
I also have to mention Kebab Kitchen’s business neighbor. Michael Citteroni runs the bicycle rental shop next door, and he is one of my close confidants. Even though he could grace the cover of a men’s fashion magazine, I feel a kinship with him. Just like me, he has an overbearing ethnic father. Michael owns a Harley-Davidson, and against better judgment, I rode with him for the first time a month ago. Turns out, I loved it and we have gone on more than one ride to the boardwalk. Michael and Azad don’t see eye-to-eye, but they have managed to co-exist as business neighbors.
Are there any four-legged animals in your life?
Yes! My family has adopted an outdoor restaurant cat named Gadoo, which means cat in Armenian. Not very original, I know. Gadoo is orange and black and feisty, and I always stock his favorite treats from the local grocery store.
Who are the other people in your life?
My parents, Angela and Raffi Berberian, play an important role in my life. We are a tight-knit Armenian, Lebanese and Greek family. That also means that everyone is in everyone else’s business. My matchmaking mama has been driving me nuts.
Kebab Kitchen’s waitresses are my older sister, Emma, and a long-time restaurant employee, Sally. Then there’s Investigator Calvin Clemmons. We haven’t always gotten along and he hasn’t been encouraging of my sleuthing.
Favorite Food?
Shish kebab, hummus, and baklava. I did grow up in a Mediterranean restaurant and manage it now.
Favorite pastime?
Jogging the Ocean Crest Boardwalk.
What’s going on in your life right now?
Well, things haven’t gone exactly as I’ve planned. To celebrate a successful summer season, the town plans a beach festival. I feel indebted to Ocean Crest and I volunteered to run the wine and food portion of the festival on the boardwalk. But things take a turn for the worse when an arrogant businessman, Archie, gets in a screaming match with my best friend, Katie, over judging a sand castle contest. And when Archie is found shot dead under the boardwalk, things don’t look good for Katie. I know Katie’s innocent and I won’t let my friend take the fall for murder. It’s up to us to investigate before another person gets skewered.
Thank you for letting me chat with you today!

One Feta in the Grave

(A Kebab Kitchen Mystery)
by Tina Kashian
About the Book 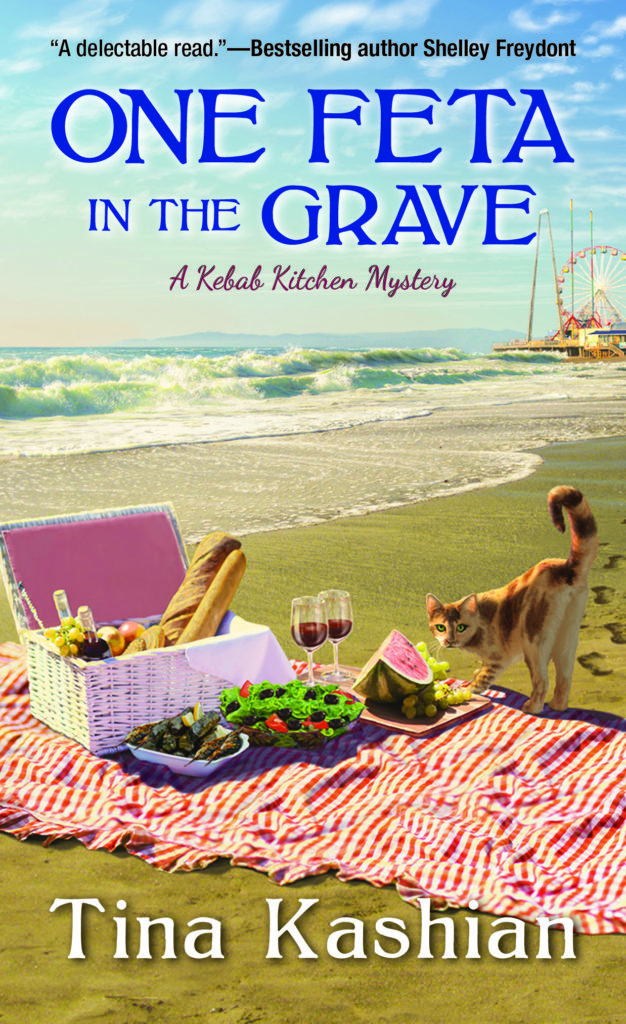 One Feta in the Grave (A Kebab Kitchen Mystery)

As summer comes to an end in her Jersey Shore town, Lucy Berberian continues to manage her family’s Mediterranean restaurant. The Kebab Kitchen also has a food tent at this year’s beach festival. But now a local businessman is under the boardwalk—dead by the sea …

With a sand castle contest and live music, Ocean Crest bids a bittersweet farewell to tourist season. Summer will return next year … but Archie Kincaid won’t. The full-of-himself store owner has been fatally shot, soon after a screaming match with Lucy’s best friend. Katie’s far from the only suspect, though, since Archie had some bitter rivals—as well as some relationships no one knew about. It’s up to Lucy to look into some seedy characters and solve the case before the wrong person gets skewered …
Recipes included! 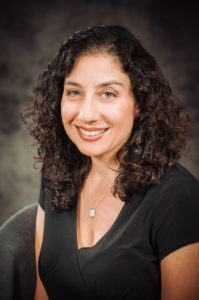 Tina Kashian spent her childhood summers at the New Jersey shore, building sand castles, boogie boarding, and riding the boardwalk Ferris wheel. She also grew up in the restaurant business where her Armenian parents owned a restaurant for thirty years. She worked almost every job—rolling silverware and wiping down tables as a tween, to hosting and waitressing as a teenager.
After college, Tina worked as an NJ Deputy Attorney General, a patent attorney, and a mechanical engineer. Her law cases inspired an inquiring mind of crime, and since then, Tina has been hooked on mysteries. The Kebab Kitchen Cozy Mystery series launches with Hummus and Homicide, followed by Stabbed in the Baklava and One Feta in the Grave by Kensington Books. Tina still lives in New Jersey with her supportive husband and two young daughters. Please visit www.tinakashian.com and join her Newsletter to enter free contests to win books, get delicious recipes, and to learn when her books will be released.