A powerful novel of friendship set in a traveling circus during World War II, The Orphan’s Tale introduces two extraordinary women and their harrowing stories of sacrifice and survival

Sixteen-year-old Noa has been cast out in disgrace after becoming pregnant by a Nazi soldier and being forced to give up her baby. She lives above a small rail station, which she cleans in order to earn her keep. When Noa discovers a boxcar containing dozens of Jewish infants bound for a concentration camp, she is reminded of the child that was taken from her. And in a moment that will change the course of her life, she snatches one of the babies and flees into the snowy night.

Noa finds refuge with a German circus, but she must learn the flying trapeze act so she can blend in undetected, spurning the resentment of the lead aerialist, Astrid. At first rivals, Noa and Astrid soon forge a powerful bond. But as the facade that protects them proves increasingly tenuous, Noa and Astrid must decide whether their friendship is enough to save one another or if the secrets that burn between them will destroy everything.

Noa Weil is a sixteen-year-old that was forced from home due to a pregnancy. Her child was taken away from her by the Nazis and she’s forced to find the only job she can, cleaning at a small out of the way train station. When Noa comes upon a seemingly abandoned train car filled with infants, she’s horrified as most of these babies are dead…all but one. Noa grabs the infant and runs from the only safety she knows, determined to save this child at all costs. Fortunately for Noa, after collapsing in the snow with the infant, she is found and incorporated into a nearby circus.
Ingrid Klemt Sorrell aka Astrid Sorrell is a former circus aerialist that was married to a German Nazi officer. Her married life was good until the day her husband came home and stated he was divorcing her because she was Jewish. Unsure of what to do, Ingrid returns to her family’s home only to find it abandoned. With nowhere else to turn, Ingrid approaches a neighbor and rival circus owner for advice. She quickly becomes Astrid Sorrell, the lead aerialist and trapeze artist for the Neuhoff circus. Over time, Astrid meets and falls in love with a fellow circus performer, Peter Moskowicz. Astrid and Noa are from very different backgrounds and have had very different lives, but both find refuge in the circus. Constantly on guard against Nazis, collaborators, and the SS, Noa and Astrid do all they can to protect one another and their secrets.
Before I go any further, let me just say that I loved The Orphan’s Tale by Pam Jenoff. This was an incredibly fast-paced read that kept me enthralled from the first few pages until the very last. The Orphan’s Tale is not just a story about two women and their friendship, it’s a story about sacrifice, survival, love, and hope. This story was heartwarming as well as heart-wrenching. It takes place during World War II so you know there’s going to be drama, tragedy, intrigue, and sadness. Even with all of the despair of the times, Ms. Jenoff imbues this story with an overriding sense of hope. The story is told in the alternating voices and perspectives of Noa and Astrid. The characters are well-developed, the settings are quite realistic, and the story is compelling. If you enjoy reading historical fiction, books about World War II, or just want something a little different to read, then I strongly encourage you to grab a copy of The Orphan’s Tale to read. This is another must-read fiction recommendation. I look forward to reading more from Pam Jenoff in the future.

Disclaimer: I received a free digital advanced reader copy of this book from the publisher for review purposes via Edelweiss. I was not paid, required, or otherwise obligated to write a positive review. The opinions I have expressed are my own. I am disclosing this in accordance with the Federal Trade Commission’s 16 CFR, Part 255: “Guides Concerning the Use of Endorsements and Testimonials in Advertising.” 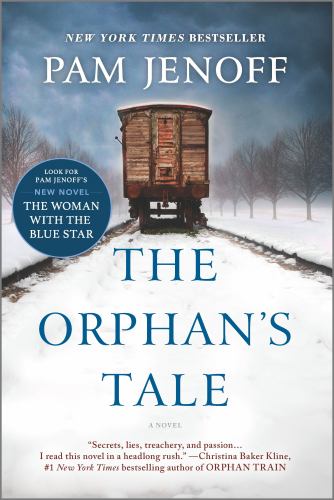