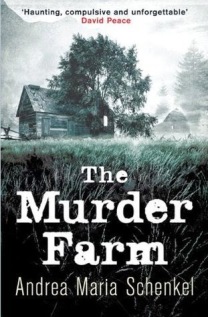 The Times Literary Supplement said of The Murder Farm, “With only a limited number of ways in which violent death can be investigated, crime writers have to use considerable ingenuity to bring anything fresh to the genre. Andrea Maria Schenkel has done it in her first novel.”
The first author to achieve a consecutive win of the German Crime Prize, Schenkel has won first place for both The Murder Farm and Ice Cold.
The Murder Farm begins with a shock: a whole family has been murdered with a pickaxe. They were old Danner the farmer, an overbearing patriarch; his put-upon devoutly religious wife; and their daughter Barbara Spangler, whose husband Vincenz left her after fathering her daughter little Marianne. She also had a son, two-year-old Josef, the result of her affair with local farmer Georg Hauer after his wife’s death from cancer. Hauer himself claimed paternity. Also murdered was the Danners’ maidservant, Marie.
An unconventional detective story, The Murder Farm is an exciting blend of eyewitness account, third-person narrative, pious diatribes, and incomplete case file that will keep readers guessing. When we leave the narrator, not even he knows the truth, and only the reader is able to reach the shattering conclusion.

In post-war Germany, a small rural village has made a horrific discovery. A local family has been viciously murdered on their family farm. When The Murder Farm begins that is all the reader knows, that an entire family has been murdered. Obviously the question on everyone’s mind is who did it? But as the story develops it soon becomes clear that it is easily understandable that someone might want to kill Mr. Danner, but there doesn’t seem to be any reason to kill the wife, daughter, grandchildren, and servant.
The Murder Farm is the first book I’ve read by Ms. Schenkel and I wasn’t quite sure what to expect. The title pretty much tells the story, or so I thought. The “truth” is revealed in a very unusual manner through eyewitness narrative, villager interviews, as well as police case files. Just when you think you know where the story is going, Ms. Schenkel provides a nice twist just to keep you guessing. I found The Murder Farm to be a very fast and enjoyable read simply because I was pulled into the drama and couldn’t wait to find out who did it and why. I especially enjoyed reading villagers interviews. The villagers provided insight into the character and inner-dynamics of the Danner family. The Murder Farm could have been a dry police procedural with the introduction of the case files, interviews, and narrative, but Ms. Schenkel has created a story of murder that literally comes alive and kept this reader’s attention from beginning to end. If you enjoy a good murder mystery/detective story then you’ll definitely want to add The Murder Farm to your reading list.