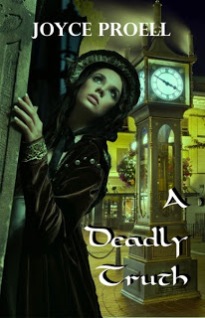 A man obsessed, a woman willing to risk it all…

Tainted in the eyes of Victorian society by his wife’s suicide, successful entrepreneur Doyle Flanagan turns a deaf ear to the baseless gossip and harsh rebukes. Ignoring his shattered reputation, he goes about his business making money, doing some good for others and making a few enemies along the way. Arrested for a murder he didn’t commit, he is forced to rely on a feisty school administrator to solve the puzzle. As he struggles to prove his innocence, he realizes gaining the trust and loyalty of Cady Delafield may be more important than his freedom.

On a quest to locate a missing student, school matron Cady Delafield enters a stranger’s house and discovers the woman murdered. Driven to see the murderer brought to justice, she is determined to prevent any further tragedy even if it means joining forces with the very man accused of the atrocity. Against the wishes of her powerful family, she risks her job and reputation to learn the truth. But will
the truth, once revealed, drive her away from the man she has come to love?

Passion and murder collide in 1880’s Chicago as they race to keep one step ahead of the police who want Doyle to pay for his crime. As the attraction between Cady and Doyle sizzles, they battle suspicions, lies and lethal actions to uncover the murderer before he destroys them both.

The Book Diva’s Reads is pleased to host a visit with author Joyce Proell. Ms. Proell provides us with a little insight into who she is as a person and a writer.

On Becoming a Writer

I may be one of the few writers who never imagined I’d ever write a book. Instead, I wanted to be an artist and studied art in college before I switched to psychology and social work.

The morning after a blizzard left the city of Chicago crippled; I slogged through the pristine snow to Lincoln Park Zoo. The place was deserted. The lion building was open. Inside stood about a half a dozen lions in cages. I was the only person there. These massive, powerful animals, some with enormous manes, stared at me. Then, in unison, they began to roar. The thunderous sound engulfed me. The sheer enormity of rumbling noise made me quiver. I couldn’t breathe. I thanked God I stood on the other side of those thick, steel bars and not with the muscular creatures. The deafening noise went on and on. What a frightening and marvelous experience.

The birth of my daughter, Kate, ranks the highest. After nine months of pregnancy, I was well and truly ready to greet this new person. When the nurse handed me the bundled babe, I saw a slight resemblance to me in her rosy face. The connection was unmistakable. I knew we were a part of each other and would be forever.

Something to look forward to

Release of A Burning Truth, December, 2013
A winter in Florida

The Pink Ballet Slippers was the first book ever read. Like most little girls, I adored the color pink. Once I spotted the illustration of pink ballet slippers on the cover, I couldn’t resist reading it.

I recall two nursery rhymes. The first was The Old Woman in the Shoe. The idea of so many children living in a shoe—and the shoe illustration had all these windows on different levels—intrigued me. The second rhyme was Wynken, Blynken and Nod. I often wondered what I’d do sailing off in a wooden shoe.

By far, the best character is Wile E. Coyote. Gotta love the guy’s speed and tenacity. Nothing can keep him down, quite literally. No matter what the obstacle, whether he’s run over, thrown off a cliff, or flattened with a boulder, he pops right up, silly grin in place, and keeps moving forward. What a great metaphor for life.

Cherished. The concept of being cherished implies a certain reverence and appreciation. To cherish means to nurture another person through loving, respectful actions. How wonderful is that? Whether you are the giver or receiver, being cherished feels great.

In The Last of the Mohicans, there is a scene which takes place at night. French and British gunfire is erupting like fireworks. Smoke drifts across the starry sky. After days of sexual build-up, Daniel Day-Lewis kisses Madeleine Stowe. It’s intense, wild, and as passionate as the bombs going off in the background.

I’d love to hear from readers. What is your favorite on-screen kiss?


Thanks again for having me here today. It was fun.

Joyce Proell grew up in Minnesota and attended college and grad school in Chicago. After working in mental health, she retired at a young age to write full-time. Her first book, Eliza, was published in 2012. When she isn’t writing mysteries or historical romances, she loves to travel, walk, read, and do crossword puzzles. She and her husband make their home in rural Minnesota in her very own little house on the prairie.

Alexandra Neve is a student at University College London whose world suddenly falls apart. When her best friend jumps from the university’s rooftop, she can’t stop herself from asking, ‘Why?’ The police rule her friend’s death a suicide and for them the case is closed — so whom can she turn to for help?

Sometimes the person you need the most is the one you least expect to find, and in this case it’s none other than Ashford Egan, a blind middle-aged history professor, who’s more willing than most to listen to what she has to say.

Neve and Egan are as different as they come. She’s restless, careless at times, and fearless when the need arises, while he’s almost the complete opposite: a deep thinker with an analytical mind, a highly rational and collected individual.

As they enter the violent world of the Russian mafia, they must overcome their differences and learn to work together. It’s their only chance if they want to survive.

I don’t find much more information on Anthony Anderson and eventually stop researching for lack of interesting leads. I spend Monday morning tailing him, instead. I leave the flat at the crack of dawn in my mother’s old blue Fiat Punto and drive all the way up to the Andersons’, my camera on the passenger seat.

I park a little farther up the road, turn off the engine and check the camera. Mr Anderson’s dark Mercedes passes me, at six thirty. I snap two pictures, before turning on the ignition and following him at a reasonable distance.

He goes straight to work and disappears in an underground car park that requires an ID card.

I open the car door and move to the boot. I reach down for one of my short winter duffle jackets and a black cap. I shrug both on and then grab a small parcel, before closing the boot and walking to the Credit Suisse building.

I force myself to walk in as casually as I can, and approach the reception with a look I hope is confident.

‘Morning,’ I say to the young man at the desk. ‘Urgent delivery for Anthony Anderson.’

The young lad narrows his eyes on the parcel and then looks me up and down. I square my jaw. Time to see whether my plan’s going to work.
I pinned a badge on my chest. I made it up on my laptop, with a fake logistic company name and logo, and my name and picture. The cap on my head bears the same logo. It’s actually one of my old white caps that I craftily hand-painted last night.

‘Sure,’ the man says with an easy smile. ‘Leave it here; I’ll see that it’s delivered with the morning mail.’

‘Sorry, but it’s hand delivery only.’ I shrug apologetically.

‘Fine.’ The man motions to one of the men minding the elevator. ‘He’ll escort you.’

That’s not what I had planned. I smile nonetheless and follow the bulky man through the lobby.

The elevator doors close after us and I stand immobile in a corner. Porca vacca, Lexa! Why didn’t you think it through? I’ve been too hasty again. How could I think that they would just let me wander the hallways on my own? My cover will be blown if Anderson catches sight of me, and there I am, being escorted straight to him. Way to go, Lexa!

My escort takes me to an office and we stop in front of a secretary.

‘Parcel for Mr Anderson,’ I tell her, fighting hard to prevent my voice from quivering.

He has to be here, just behind the large wooden doors that bear his name. She’s going to call him and he’ll come right out and see me and then it’ll be goodnight Vienna! 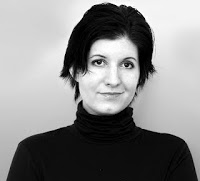 Cristelle Comby was born and raised in the French-speaking area of Switzerland, somewhere between Geneva and Lausanne, where she still resides. Thanks to her insatiable thirst for American and British action films and television dramas, her English is fluent.
She attributes to her origins her ever-peaceful nature and her undying love for chocolate. She has a passion for art, which also includes an interest in drawing and acting.
Russian Dolls is her first new-adult novel, and she’s hard at work on the next titles in the series.

As part of my book blog tour I was invited to offer ten tips on how to avoid the slush pile.

So who am I to offer such advice?  Well, I currently have three books published, Recipes for Disaster, Somebody to Love and Warrant for Love.  I also have a book that released on Valentine’s Day, A Little Bit of Madness, and a further three book contract.
Blowing my own trumpet a bit, aren’t I?
After more years than I care to mention sobbing onto my keyboard, spookily recognising a rejection even before I’d opened the email, it’s a first, trust me.  My road to publication has, you see, has been littered with pot-holes, and it’s only now I feel qualified to offer such advice. I would therefore like to share some of what I’ve learned along the way in the hope it might help make your road a little less bumpy if you are just starting out on your publishing journey.

OK, my ten tips are:

I wish you every bit of luck your hard work deserves! 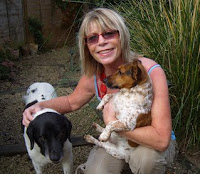 Now residing in Worcestershire, Sheryl Browne grew up in Birmingham, UK, where she studied Art & Design. She wears many hats: a partner in her own business, a mother, and a foster parent to disabled dogs. Creative in spirit, Sheryl has always had a passion for writing. A member of the Romantic Novelists’ Association, she has previously been published in the US and writes Romantic Comedy because, as she puts it, “life is just too short to be miserable.”
Sheryl’s debut novel, RECIPES FOR DISASTER – combining deliciously different and fun recipes with sexilicious romantic comedy, is garnering some fabulous reviews! Sheryl has also been offered a further three-book contract under the Safkhet Publishing Soul imprint. SOMEBODY TO LOVE, a romantic comedy centering around a single policeman father’s search for love, his autistic little boy and the boy’s Autism Assistance Dog, launched July 1 with an immediate 5* review. WARRANT FOR LOVE, bringing together three couples in a twisting story that resolves perfectly, released August 1, and A LITTLE BIT OF MADNESS released on Valentine’s Day 2013.